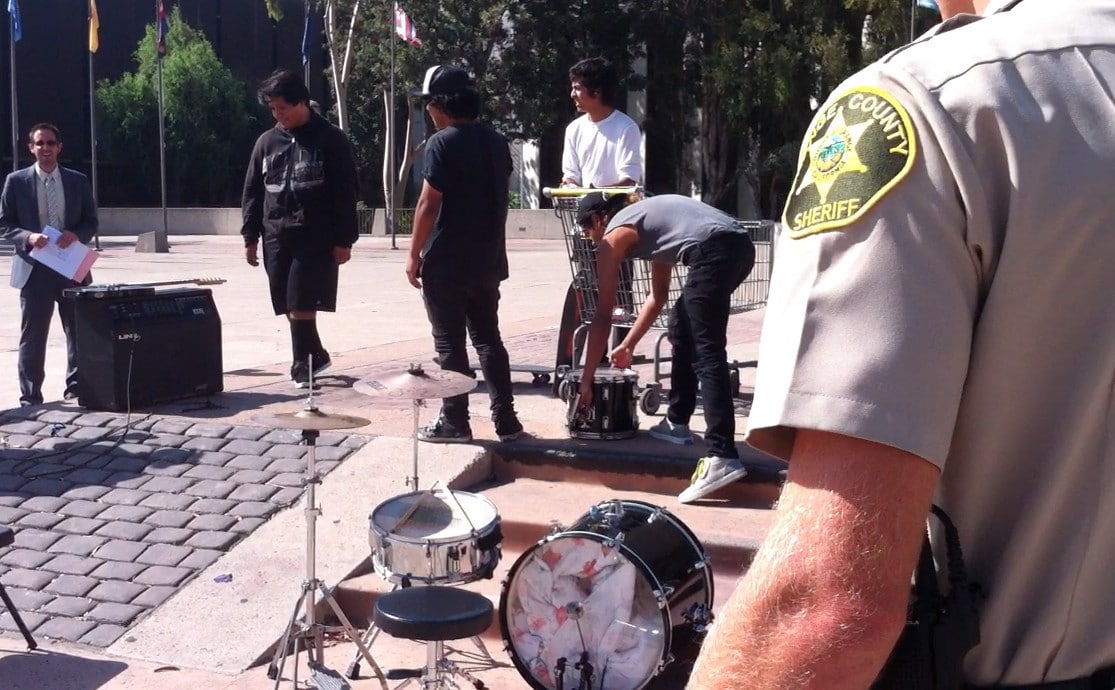 You don’t often hear live music being played on the streets of Santa Ana.

It’s hard for anyone to say they don’t like music. I understand that people dislike vandals and thieves.

So I don’t see why my friends and I can’t play on the sidewalk for people. Since I started playing the guitar at age 15, I always wanted to play music that pleased my ears.

With no real instruction, I learned to play pretty well for being self-taught. I started jamming out with friend of mine who also played instruments and wanted to form some kind of musical group.

We had a deep interest in the Punk & Thrash genres and looked to play music similar to that. I formed a band called “The Skanks” in 2009, and we played until 2011.

After that I joined another band, and as I got better, I played with more and more people. Before I knew it, I was playing my guitar pretty fast, and I had my own large amplifiers. Soon I picked up the drums, and to my luck, I got a full drum set at a garage sale for only $30. Having my own guitar, speakers and drum equipment, I was able to set up my own jam sessions.

Did I mention I live in a Santa Ana apartment that does not allow loud music. So I had everything except a place to practice. With my previous bands, we had a garage to play in. But after splitting those bands, I no longer had a place to practice. So I decided to get a small power generator and take my equipment to the park across the street.

Angel’s Park is its name.

We were able to jam out there a few times, but the noise complaints always stopped us. We were surrounded but homes, government buildings, and apartments. So that wasn’t going to work. A few weeks later I heard that we might be able to play at Artists Village down the street.

So me and a couple of friends took my equipment and set up near the area. We couldn’t exactly play at the Village, but there was a power source across the street we could use.

Plenty of people seemed surprised and somewhat amazed that we were playing on the sidewalk so randomly, especially the style and genre we were playing. And of course, we got kicked out after a few hours.

But to all of us, it was worth it.

The next week we tried it again but failed miserably. Our first spot got us kicked out, so we went to our next power source in the basement of the Santora building. That didn’t work too well, but the acoustics in there were amazing, even though we only got to play for about 15 minutes. After getting kicked out of the basement, we went back to the original area we were at, and again we were kicked out. It was by a lady who had an office that promotes and books events for bands and musicians.

That was surprising, because I never would have thought a music lover would complain. She did mention that she could possibly get us in contact with the Yost Theatre and try to get us some time in their studios.

That week as I was trying to sleep, I decided I could probably play at the flagged area by the courthouse.

The very next day we grabbed my equipment, put it on shopping carts and set up on the stage.

Out of nowhere two public defenders came to us, and although they liked our style, warned us that the sheriffs might get bothered by our noise.

Soon the sheriffs did show up, and although they neither disagreed, they felt we should leave before the police came. We put away our equipment and left the area slightly disappointed. On our way home, a few police officers caught up with us and told us not to be walking away from them.

They didn’t give us any trouble, since we didn’t really do any damage.

We were already by the street when the police officers left, and we were left wanting to play still. So we took a turn into Sasscer Park on Ross and Santa Ana Boulevard. We found a power source, and to our surprise, we managed to play at that spot for a few hours. I’ve performed live for groups of people and friends included.

Venues always gave us a chance to play. But finding a place to practice or even just a place to share our music has been difficult.

We either had no source of power or were told to leave.

We never would have imagined it to be so difficult to play.

Hauling equipment isn’t so easy when you don’t have a car and no one wants to host your talent — especially carrying huge speakers, guitars, drums and all the cables and hardware needed. I just wished there was a place that welcomed performers and musicians at any time of the day.

One day I hope to own a restaurant-venue that will always have an open stage for anything anyone who wants to show or express.