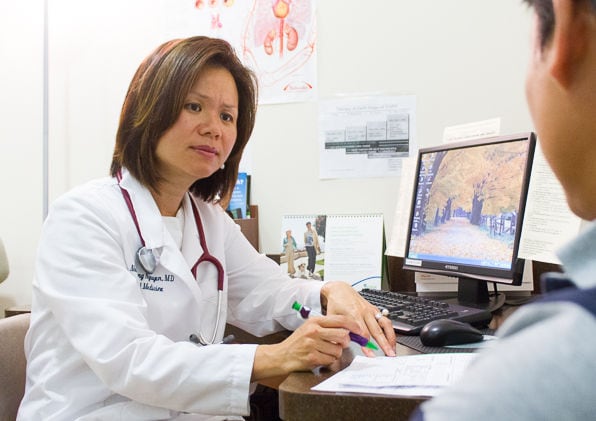 Part three of a series about immigrant health in Orange County. Read parts one and two.

Sitting in a neighbor’s home in Westminster, 68-year-old Bay Vo discusses what it takes to manage her type 2 diabetes, a condition she’s had for 15 years. She pinches her thumb and index finger together to suggest the size of the needle that she inserts into her midriff twice a day.

Does it sting? “Like an ant bite,” she says.

The shots are becoming the least of her problems, as she is now experiencing one of the most dreaded complications of diabetes, impaired vision. She also has to take special care of her feet, which for most diabetics are vulnerable to infection and ulcers that sometimes lead to toe or foot amputation.

A native of Vietnam who came to the U.S. in 1995, Vo finds herself in an increasingly common medical predicament, with Asian-Americans now more likely than Caucasians to suffer from type 2 diabetes. U.S. lifestyle is thought to be a key factor, which may explain, for example, why diabetes is more prevalent among Japanese-Americans living in the U.S. than among Japanese in Japan, according to the Joslin Diabetes Institute.

The national trends also hold true locally. Recent studies showed a high rate of gestational diabetes among Vietnamese and other Asian women compared to whites and Latinas in Orange County. Gestational diabetes occurs when a woman develops diabetes temporarily during pregnancy, and the condition is linked to a higher chance of getting the illness later in life.

Weight Less of a Factor with Asians

A young martial arts enthusiast demonstrates his skills at a recent health fair in Santa Ana. (Photo by: Amy DePaul)

Unlike diabetes among white, Latino and African-American patients, diabetes among Asians is not as commonly associated with higher body mass index or BMI, a measurement of weight and obesity.

“Most people think diabetes is associated with a BMI of 30 or more, but with Asians it’s occurring at lower BMIs. Asians don’t have to be obese to be at risk of diabetes,” said Professor Sora Park Tanjasiri of the Center for Cancer Disparities Research at Cal State Fullerton.

Some experts suspect hidden body fat, such as fat accumulation in the liver, is associated with Asian diabetes, and many researchers worldwide have called for lower BMI standards when measuring obesity in Asian populations.

The phenomenon of slender Asians with diabetes is nothing new to Dr. Mai-Phuong Nguyen of Westminster. Many of her patients are thin, aging Vietnamese who remain active and try to eat properly, and she said they share a common lament: “‘I’m not overweight, so why is my diabetes terrible?’ I tell them, ‘You’re unlucky.’”

But luck is only one factor in the diabetes equation.

‘Turning to the Dollar Menu’

Even though Asians in the U.S. are more likely to get diabetes at lower BMIs, immigrants and their children are still susceptible to weight gain and poor diet that lead to ill health. Youth obesity has risen faster in Asian-American communities than any other group in the last 10 years, according to a new report from the Orange County Asian and Pacific Islander Community Alliance.

“It’s a mix of acculturation, assimilation and being very low-income. People are turning to the dollar menu,” said Rowena Robles, OCAPICA program director.

“There is this idea that all Asians are wealthy, she said. “The Asian groups we work with are more recent immigrants,” Southeast Asian newcomers in particular. “The majority of them are refugees, and they still haven’t gotten a financial toehold into the economy here.”

The rise of Asian-American diabetes and youth obesity conforms to the immigrant health paradox, which scientists define as a tendency for immigrants to arrive in better health than the native-born U.S. population, only to see a decline by the next generation.

“In general, Asians in their home countries tend to have higher rates of physical activity and they tend to eat healthier and it’s a rice-based diet with more vegetables and fish and less meat,” Tanjasiri said. But upon coming to the U.S., “they tend to quickly change their diet to more high-fat proteins — for example, higher meat intake and fast food.”

In addition to saving money, incentives for eating fast food include work obligations and children’s culinary preferences, according to Professor Marjorie Kagawa-Singer of UCLA’s School of Public Health.

In a study of low-income Chinese, Vietnamese and Hmong families that Kagawa-Singer participated in, a cultural divide emerged.

“The struggle between maintaining traditional Asian diets and adopting those of mainstream American culture was evident,” according to the study. “Many parents expressed how often they gave in to their children’s desire to eat and buy heavily marketed and less healthy foods more than foods served at home. … Many mentioned the lure of fast food because of its easy availability, low cost and efficiency for parents who are often both working long hours.”

Asian immigrants face “an unequal cancer burden,” said Dr. Moon Chen, a UC Davis professor who leads the largest project ever undertaken to curb cancer in Asian-Americans. First, they are susceptible to the infectious cancers to which they are exposed in their home countries, and later as they adopt the U.S. lifestyle they become more likely to suffer from so-called western cancers.

“Examples of western cancers are those related to diet and obesity,” Chen said, citing colorectal and breast cancer as examples. “The longer we are in the U.S., the more western cancers you see.”

For example, Japanese-American women, whom Chen noted are among the most established and acculturated Asia communities in the U.S., have elevated breast cancer rates that are approaching the high rates of U.S. white women. Normally, breast cancer is higher among African-American and white women than Asians and Latinos.

Childbirth later in life, fewer children, lack of breastfeeding, environmental exposure and even obesity are thought to play a role in higher breast cancer rates in industrialized countries. When it comes to colorectal cancer, however, the blame falls squarely on a modern diet heavy in fat, which can slow down food digestion and waste elimination.

In contrast, “Cruciferous vegetables reduce the time from mouth to bowel,” Chen said, referring to vegetables such as cauliflower and broccoli. Food that spends less time in the digestive tract reduces the chance for cancer-causing toxins to accumulate.

Stomach and liver cancer, meanwhile, are high among Asian immigrants, Chen said. The reason is these cancers are traceable to infections or viruses linked to countries of origin. For example, liver cancer is linked to hepatatis B and C, which are extremely common in Asia.

Immigrant Vietnamese women have some of the highest rates of cervical cancer, which is caused by the human papilloma virus or HPV. But Chen said cultural mores may be compounding this trend, including the fact that physicians in Vietnam are still largely male and lack training in women’s health. Modesty also may contribute to failure to perform the yearly HPV test that is part of a standard American gynecological exam, Chen said.

Latinas have high rates of cervical cancer too, said Chen. “We need to make it a priority to reach out to women of color.”

Chen also called for public outreach efforts such as anti-smoking campaigns to respond to elevated tobacco use among Asians. He said health education efforts aimed at Asian-Americans and other immigrants would reduce cancer rates.

One such initiative is already under way in Orange County, where representatives of OCAPICA promote preventive health care at neighborhood events. They also visit the beauty colleges that train thousands of Vietnamese immigrant women in cosmetology, speaking to students in their native languages about breast and cervical cancer and the value of cancer screenings.

On a recent Saturday at Santa Ana High School, OCAPICA’s Hanh-Tien Nguyen staffed a booth at a community health fair. She answered questions from passersby, some of whom wanted to know how federal health care reform would affect them.

On occasions like this when she’s in the field, Nguyen often takes the opportunity to mention cervical and breast cancer and how to get free or low-cost screenings.

Though she was born in Vietnam, Nguyen still must work hard to enlist the trust of immigrant women she meets in public settings. The general fear of authority, language barriers in medical settings and misunderstanding about the American medical system create obstacles to getting care.

Nguyen has learned that the women respond well to reminders that by attending to their own health they are helping their families.

Amy DePaul’s reporting on immigrant health was undertaken as part of the California Endowment Health Journalism Fellowship, a program of USC’s Annenberg School for Communication & Journalism. You can reach her directly at [email protected]