The Korean War was less than three weeks old when Pvt. Robert Dugan and nine other Marines secretly landed behind enemy lines in North Korea and in pitch black darkness blew up a supply train coming from Russia, closing for weeks the North’s only rail supply line.

Months later, Dugan was wounded fighting in the famous Chosin Reservoir battles. Surrounded by thousands of Chinese troops, Dugan and his fellow Marines barely survived temperatures that dropped to more than 30 degrees below zero.

Now 88 and living in Costa Mesa, Dugan, with a 40-percent medical disability rating from federal Veterans Affairs, still has shrapnel in his side from the enemy grenade explosion that wounded him during that frigid fighting. And like many U.S. military veterans who spent their early adult years serving their country, he speaks modestly of achievements.

“My philosophy was, you go where they send you, do what they tell you and you won’t have too many problems,” he says of his days in combat.

While Dugan was in Korea, Navy medic Elizabeth Andersen was doing her war service at a hospital in Oakland, caring for the gravely injured men who lost arms or legs and worried how the country they were returning to would treat its young, disabled warriors.

“I owe a lot to them, because I learned how you can be strong if you put your mind to it,” said Andersen, 83, of Santa Ana. Her experiences as a medic also cemented her interest in medicine, leading her to obtain her nursing degree after the war.

The Korean War, which spanned 1950 to 1953, cost the lives of 33,739 U.S. military personnel and saw another 103,284 wounded. Yet the achievements of those who served in this war, which marked its 60th anniversary this year, have often been overlooked as they happened in the shadows of World War II and Vietnam.

Korea marked Dugan’s second round of service to his country, his first coming during World War II in the merchant marine. After that war, he moved from his native Connecticut to California and enlisted in the Marines, where he trained as a machine gunner.

On June 25, 1950, Dugan was aboard the USS Juneau near Japan when North Korea caught South Korea by surprise with an invasion so successful that the northern troops nearly overran the capital of Seoul.

Less than three weeks later, on the night of July 11, Dugan and nine other Marines climbed into a small boat and, protected by darkness, headed for the North Korean shore.

The rail supply line ran nearby, and their mission was to blow it up. At first, he said, they had trouble finding the train tracks and then realized that in the blackness they had climbed on top of a tunnel and the tracks were below.

The unit planted explosives inside the tunnel and then escaped in the dark back to their ship. From their vantage point, Dugan said, they couldn’t see the supply train when it went into the tunnel. But “the train came in and it didn’t come out,” he said.

The train and the supply route were blown up inside the tunnel, disrupting North Korean rail supplies for weeks.

For that action, Dugan and his colleagues received the Bronze Star for Valor, the first such honor of the Korean War.

Five months later in December 1950, Dugan was wounded by a hand grenade during fighting around the Chosin Reservoir, a pivotal engagement that saw vastly outnumbered U.S. troops surrounded by Chinese forces.

“The weather was brutal,” Dugan recalled. Pursued by the Chinese and with nowhere to escape from the sub-zero temperatures except shallow holes dug in the ground — when it wasn’t frozen too hard to dig — Dugan and the other Marines fought a defensive battle until they were able to regroup and launch their own attacks.

On Dec. 6, Dugan was manning his machine gun in combat when suddenly he found himself facing the opposite direction.

“Bang. All of a sudden, I was facing the other way. Come to find out, I got hit by a grenade,” he said. “It spun me around.” Dugan was able to walk to a first-aid tent and later was flown out of Korea.

Andersen grew up in the San Joaquin Valley and thought she might be interested in making medicine her profession when she was a Navy medic assigned to the Naval Hospital in Oakland.

At the time, that hospital was the “amputation center,” she said. Her job was to help the servicemen, most of whom were in their early 20s, learn how to use their artificial arms and legs.

“It taught me a lot about acceptance and not giving up,” she said.

Rehabilitation included formal training, but she and others also tried to find ways to help the wounded servicemen adjust to living outside the hospital. She said some patients worried about society rejecting them because of their injuries despite the sacrifices they made for their country.

Andersen, the same age or even younger than her patients, fought their fears with compassion and humor.

One popular tactic, she said, was taking groups of patients to restaurants in San Francisco that offered free meals to those who were recovering from wounds.

“I would take a car load of them,” she said. “We would put the arms and legs into the trunk of the car. That way we could get more of them into the car.”

Once at the restaurants, the servicemen not only ate, but if a band was performing, some would try dancing. And, Andersen said, as the evening wore on, if a prosthetic leg became uncomfortable, well, some men just took them off and hopped around without them.

She also recalls the men who would leave the hospital grounds in their wheel chairs as a group. To go uphill, one would grab hold of the bumper of a passing car and then the others would grab on to him and they’d form a train up the hill.

At the top, she said, they would line up, hold onto each other in a line and play “crack the whip” racing down hill.

“I enjoyed it,” she said of her work helping amputees. “I thought I did good, and I thought they did me good.” 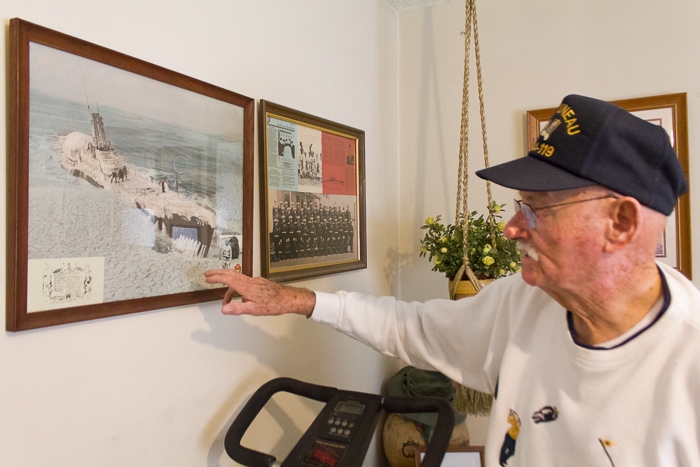