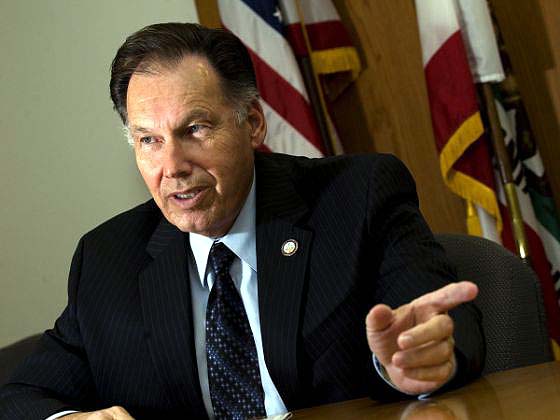 Orange County District Attorney Tony Rackauckas plans to continue seeking and enforcing gang injunctions while his office considers whether to appeal a recent federal appeals court ruling that gang injunctions used in the city of Orange were unconstitutional.

The case in Orange could potentially head to the full 9th Circuit Court of Appeals or the U.S. Supreme Court.

“This is a war on gangs that we’re going to continue to fight,” said Susan Kang Schroeder, the district attorney’s chief of staff.

Yet the ruling is also forcing the uncomfortable question of who will pay more than $3 million for the ACLU’s attorney’s fees in the Orange case.

Since the DA’s office and Orange officials lost the case, taxpayers are apparently on the hook for the fees, plus their own legal costs.

“It’s not clear how it’s going to be paid. But we’ll make sure it will be paid” in an appropriate way, said Schroeder. “It will come out of taxpayer money.”

The DA’s office recently received a $16-million settlement from Toyota over allegations that the company concealed safety problems with its cars. But that money can’t be used for the ACLU’s fees, said Schroeder.

A panel of federal appeals judges recently ruled that the district attorney and Orange city officials violated the U.S. Constitution by banning suspected gang members from being in public after 10 p.m., among other restrictions, after they were officially dismissed from an injunction.

But the ruling hasn’t struck down gang injunctions in general.

The injunctions have been “an extremely effective tool in Orange County to actually reduce crime rates,” said Schroeder.

Thanks to the injunctions, children can now play in parks that were controlled by gangs, DA officials said.

“We have many people that thank us for making their community safer and fighting for them,” said Deputy District Attorney Tracy Rinauro.

Meanwhile, the ACLU, which filed the lawsuit, said it still has concerns about gang injunctions, which are often obtained against a gang in general, allowing police to then decide who to enforce it against.

“Imposing those kinds of restrictions” on a person without a court deciding that they’re appropriate for that person “is a serious concern,” he said.

There’s also a debate over how effective the injunctions truly are.

“Published studies of gang injunctions suggest that their affect on crime is relatively small,” said Bibring, pointing to reports showing a 10-percent reduction in assaults in the first year but a lack of measurable impacts after that.

The DA’s office, meanwhile, said gang-related crime in the Santa Ana “safety zone” has dropped 55 percent since it was implemented in 2006.

Prosecutors add that they have a process for people to seek removal from an injunction.

Yet ACLU officials said the DA’s approach in Orange infringed on the right to due process.

“The entire point of this case is that the district attorney doesn’t get to throw the rules out the window just because he thinks someone is a gang member,” said Bibring. “That’s exactly the kind of abuse our founding fathers drafted the Bill of Rights to prevent.”

“It’s crucial to give people a meaningful chance to respond before prosecutors can take away someone’s rights based on allegations of criminal conduct,” he added.

“The court recognized that when police and prosecutors make determinations about who and who isn’t a gang member, it isn’t always clear-cut, and they run a considerable risk of making a mistake,” said Bibring.