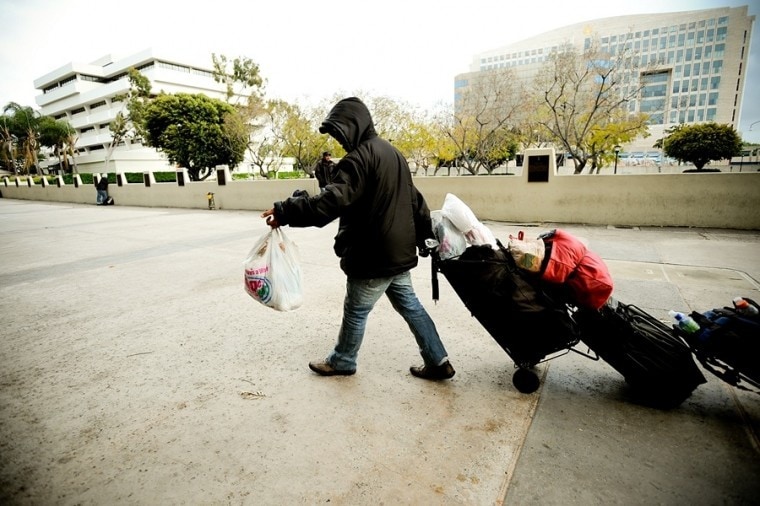 Its hard to argue with the notion that 2013 was a better-than-average year in Orange County when it came to efforts to help homeless people get off the streets.

January saw the Board of Supervisors taking a step toward providing the county with its first year-round emergency homeless shelter by approving the purchase of a 29,000-square-foot building in Fullerton.

In April, Costa Mesa, a city whose officials have been criticized for hostility toward homeless people, approved plans to partner with Mercy House Living Centers on the development of permanent housing for homeless city residents.

Mercy House also formed a partnership with Anaheim for a pilot project to conduct daily outreach to homeless people at La Palma Park and connect them with services.

In June, the city of Stanton celebrated the first anniversary of the Stanton Multi-Service Center, a trailblazing partnership between the city and the Irvine-based Illumination Foundation that has resulted in its homeless population dropping by more than a third.

“It was another year in the forward movement,” said Supervisor John Moorlach, who stepped down this year after three years as chairman of the Orange County Commission to End Homelessness.

However, 2013 was also no stranger to missteps revealing the lack of cohesiveness among policymakers and advocates that has long plagued the county’s effort to combat homelessness.

The emergency homeless shelter proposal that supervisors had such high hopes for in January was shot down by the Fullerton City Council in June. And earlier this month, county officials acknowledged the homelessness commission had completed only about half of the tasks under its Ten-Year Plan to End Homelessness that it set out to accomplish in 2013.

Emerging from this mixed bag are competing visions on how to go forward. Some advocates say the successes and failures of 2013 show that comprehensive solutions like 10-year plans don’t work, while others contend there has been remarkable progress made on a regionwide basis.

Illumination Foundation CEO Paul Leon counts himself among those believing the former. “I think there have been a couple successes peppered throughout this last year,” Leon said. “But overall, the 10-year plan has not moved forward.”

Leon said its time for county officials to accept that micro-solutions are working better than the macro-solution. He pointed to his organization’s partnership with Stanton, which has demonstrated how quickly results can be achieved, even if they are smaller results.

The Stanton program focuses on providing transitional housing to homeless people and then following up with services like behavior therapy and job placement help. This so-called wraparound approach has taken hundreds of homeless people off the streets in Stanton, Leon said.

“When you present these numbers to funders and cities, they get it,” Leon said. “We’re optimistic that the nonprofits and cities will work on smaller projects and realize that it is a waste of time to work on a large project that won’t happen in the near future.”

On the other side of this thought spectrum is Larry Haynes, executive director of Mercy House Living Centers, which operates the county’s two emergency shelters.

Haynes said he has no problem with cities providing homeless housing and pointed to Mercy House’s partnership with Costa Mesa, which could create as many as 50 permanent homes for the city’s homeless population.

But, he said, there is no getting around the fact that homelessness is a regional problem, and there has to be a search for solutions on the macro level.

Haynes also said the county’s commission to end homelessness has gotten a bad rap and accomplished much more than critics give it credit for.

“In 25 years I’ve never seen homelessness on the radar like it is now,” he said. “We have supervisors jockeying with each other to see which district can be the first to open a regional shelter; we have churches stepping up; we have groups basing their programs on evidence and facts, not on ideology.”

A concrete result of all of this, Haynes asserted, is fewer homeless on the streets.

“The evidence over the last four or five years is that the numbers are going down, and they are going down in one of the worst economies in recent memory,” he said. “And it’s because we know what we are doing.”

Dwight Smith, who runs the Catholic Worker’s Isaiah House in Santa Ana, does not share Haynes’ view of reality regarding homelessness in Orange County. Smith called the county’s 10-year plan “nonfunctional” and said that any successes have been sporadic and not caused by any county-led initiative.

“Orange County is way behind, and we are still not taking [homelessness] seriously,” Smith said.

Smith took particular issue with claims that the number of homeless in the county is decreasing, which are based on point-in-time counts taken by volunteers during one 24-hour period. Orange County’s point-in-time count this year showed a 39 percent decrease from the count taken in 2011.

The counts, mandated by the U.S. Department of Housing and Urban Development, are used to establish federal funding levels for counties and not meant to be an accurate tally of homeless people, Smith said.

“Any attempt to enumerate the homeless in a single 24-hour period using primarily volunteers is doomed to failure,” he said, adding that the closest to an accurate account is the nation’s decennial census.

The Attempt in Fullerton

Smith is also critical of Supervisor Shawn Nelson’s attempt to site a homeless shelter in Fullerton, which he equated to “grandstanding.” He said Nelson did not do the necessary outreach among stakeholders needed to get the approval of  the Fullerton City Council.

“His effort was a response to town hall meetings and not the result of a concerted effort by a professional planning committee that engages mayors, supervisors, police chiefs and citizen groups,” Smith said.

Nelson, who was named this week to take over Moorlach’s seat on the homelessness commission, did not return calls seeking comment.

However, Moorlach defended Nelson, saying his colleague “risked a lot of political capital” in his effort and “saw an opportunity and took off.”

Regarding the overall approach the county needs to take going forward, Moorlach said his feet are in both the micro and macro camps.

“It was a great idea to get collaboration,” he said of the federal government’s program to require that counties adopt 10-year plans in order to receive HUD funding. “But I didn’t see the 10-year-plan as being hands-on. If there is any way this will happen, it will take individual leaders to work on the issue from the ground up.”

Echoing Moorlach was Karen Roper, who was named executive director of the homelessness commission after serving on an interim basis for years.

“I would view the system of care as a big Titanic with a small rudder,” she said. “The county doesn’t control everything.”