We are bringing you the best and most comprehensive Orange County Coronavirus coverage. Please, join us and sustain our work today.

A group of mothers who have lost sons to police shootings led nearly a hundred protesters Monday to the steps of the Anaheim Chamber of Commerce and called on the influential business group to terminate its relationship with controversial blogger Matt Cunningham.

Cunningham this week was forced to resign from the county Parks Commission following the uproar over a satirical posting he wrote on his Anaheim Blog poking fun at the sidewalk memorials for young Latinos killed in officer-involved shootings.

The memorials have become more common in Anaheim since 2012 when a spike in police shootings led to protests in the city’s working-class Latino neighborhoods that erupted into riots in July 2012.

Two weeks ago, Cunningham posed a teddy bear with candles featuring an image of the Virgin of Guadalupe and wrote about the tendency of the organized left to take advantage of random violence to call for social change.

The post came on Dec. 12, the Roman Catholic day of remembrance for the Virgin of Guadalupe in Mexico. It also came the day after one mother, Theresa Smith — whose 35-year-old son, Caeser Cruz, was killed by police in 2009 — held a candlelight vigil for her son outside the Anaheim Police Department.

Cunningham has since apologized for the post, which received national media attention, saying he didn’t intend to offend.

Yet the poke has seemingly struck a nerve.

A clear message from Monday night’s candlelight vigil at the chamber of commerce, which is less than a block from Anaheim City Hall, is a sense of unity around one point: Cunningham’s attempt at satire epitomizes the lack of respect from the city’s political and business establishment for the harsh challenges facing Anaheim’s working-class neighborhoods.

“My son was a human being. He wasn’t a teddy bear,” said Donna Acevedo, mother of Joel Acevedo, who police say was a gang member killed in an exchange of gunfire with officers following a pursuit in a stolen vehicle.

Acevedo, who is a regular presence at City Council meetings, was recently issued a traffic citation after confronting the officer who shot her son.

County supervisors have publicly distanced themselves from Cunningham, and the Orange County Transportation Authority has put an existing public relations contract on hold, with incoming chairman Supervisor Shawn Nelson saying his tone doesn’t match the needs of a public agency.

While Chamber of Commerce leaders have now also distanced themselves from Cunningham’s blog, they stand by their consulting contract with him.

The difference between the county approach and the chamber approach toward Cunningham says volumes about Anaheim’s strained relationship with the Latino community, the mothers said.

On Monday night, Acevedo looked out across the crowd gathered for the candlelight vigil and scolded them.

“Everyone should have been here long ago,” she said.

For too long, Acevedo said, mothers like her and Smith have gone to City Council sessions and publicly pleaded for parks and programs as well as heightened police oversight in the neighborhoods that have produced so many officer-involved shootings in recent years.

“Nobody has stepped up,” said Acevedo, echoing the sentiments of the mothers that their children deserve better attention from the city’s elected and civic leaders.

Cunningham seems to have changed that.

Julio Perez, executive director of the Orange County Labor Federation, helped rally activists to the Monday protest with a Facebook invitation that placed accountability for Cunningham’s writings squarely on the Anaheim Chamber of Commerce:

These actions are beyond insensitive and offensive, not only to every mother who has lost a son, but to every Latino resident who is working to have our voices heard above the drum beat of special interests that have for so long controlled the City and diverted resources away from struggling neighborhoods.

To make matters worse, the Anaheim Chamber of Commerce is a lobby group that receives taxpayer money — your money. And they’re using that money to defile Latino traditions and disgrace the memories of all the young people we’ve lost to violence.

Given the chamber’s position to stick with Cunningham, Perez said, the city should terminate funding for the chamber.

Smith said the vigil was important in sending a message to mothers like her and who others support change. “We need more of this support,” she said.

Smith told the crowd that Cunningham’s Anaheim Blog was aimed at creating a picture that mother’s like her are an “angry vocal minority.”

Instead, she said, she hoped the episode would motivate activists to stand up to the challenge.

“That’s my Christmas wish. Let’s start collaborating. … Show them we are a community.”

Correction: An earlier version of this story stated that OCTA terminated Cunningham’s contracts. One sunset at the end of the year and another has been placed on hold. Also, Theresa Smith’s name was misstated. We regret the errors. 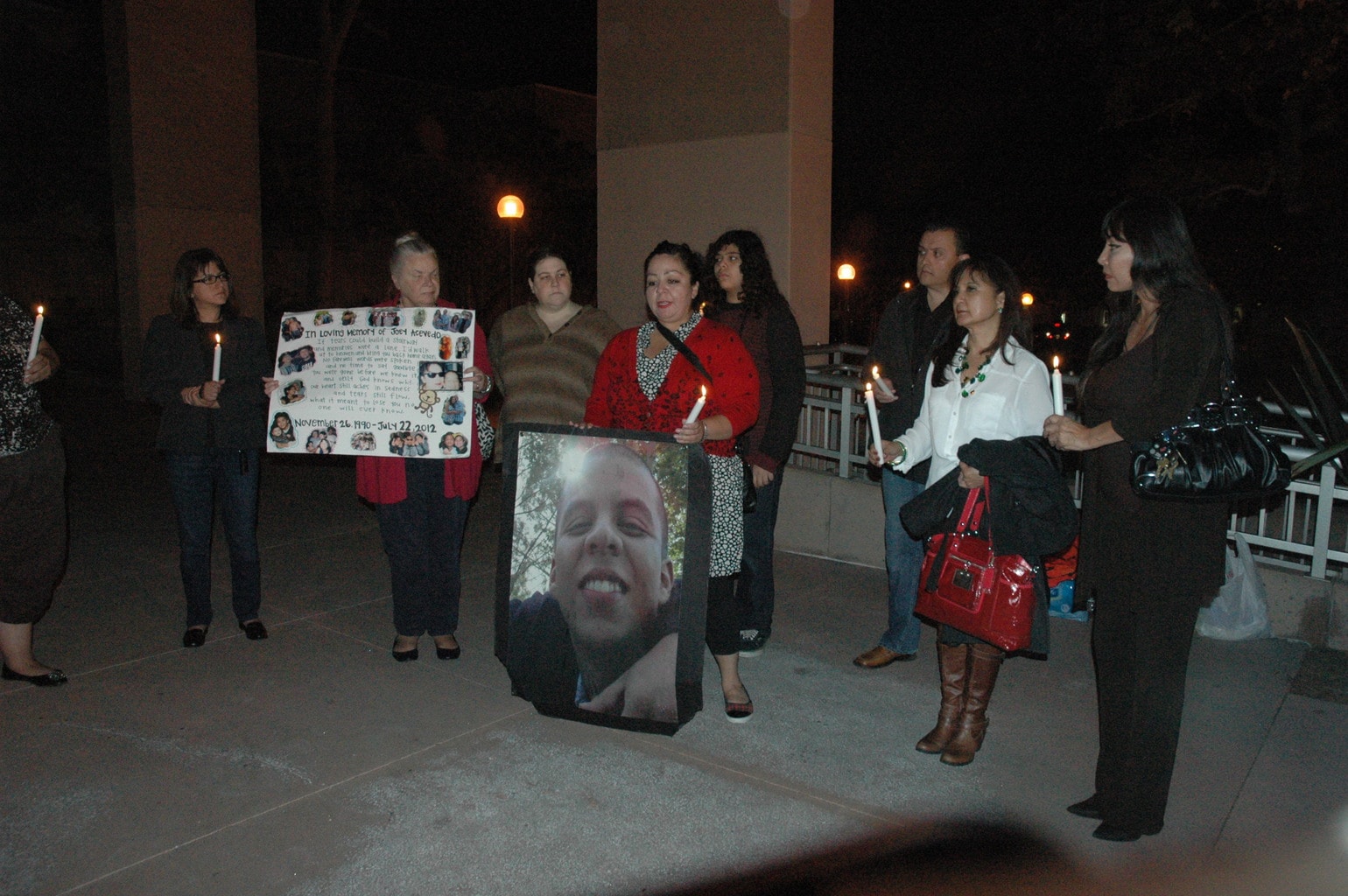 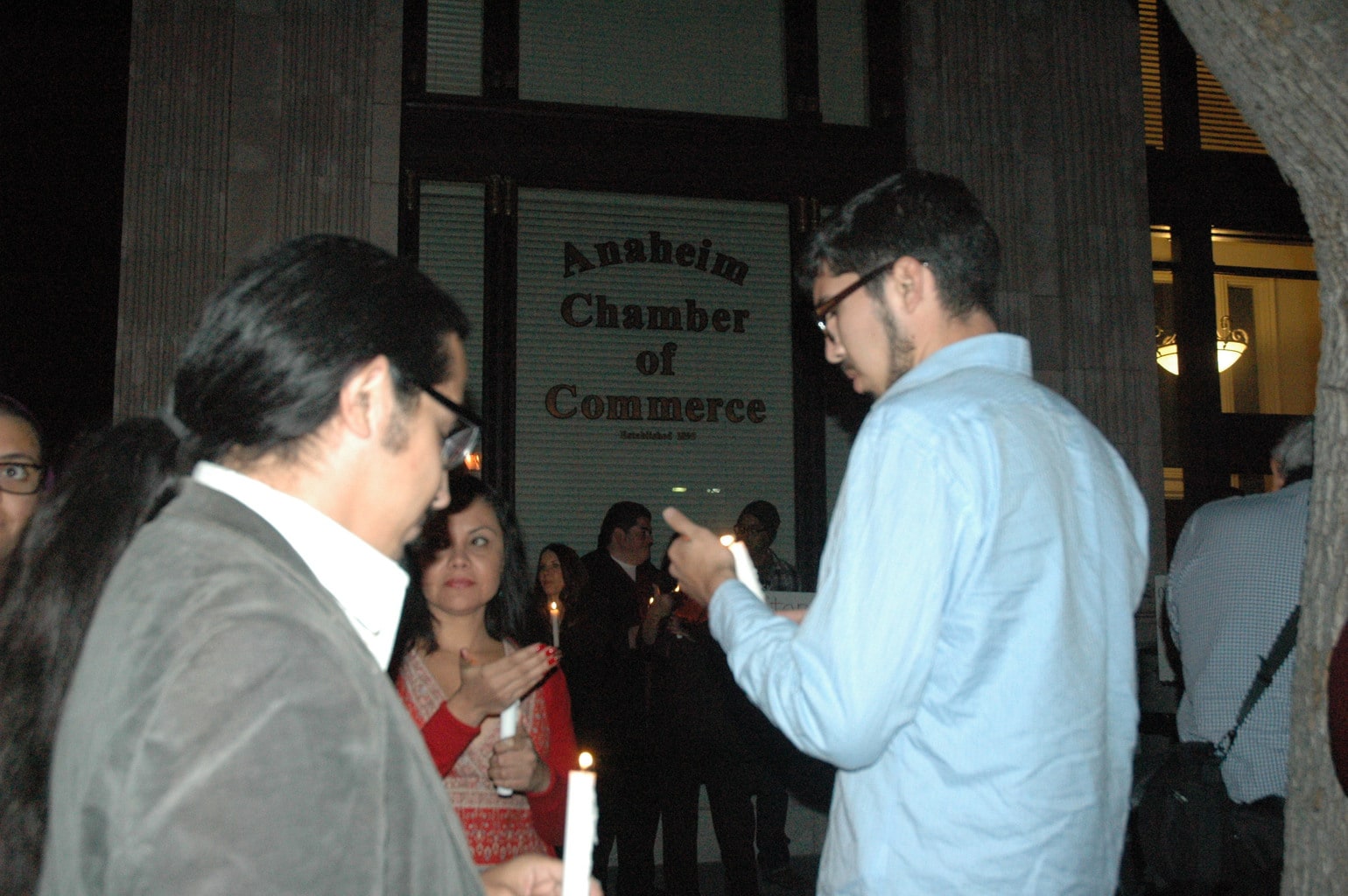