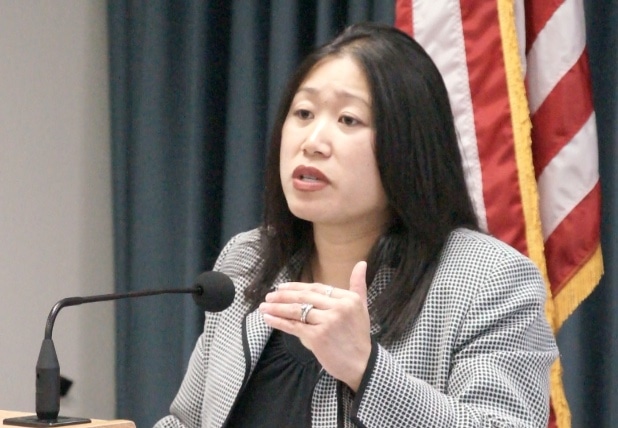 Orange County Supervisor Janet Nguyen’s grip on CalOptima — the county’s $1.5-billion health care plan for the poor and elderly — seems to be loosening in the wake of a scathing federal audit that has drawn concern from her colleagues.

On Tuesday, supervisors announced they would be reviewing their appointments to the CalOptima board at their Feb. 25 meeting.

By Wednesday, Nelson and Supervisor Todd Spitzer, who is the current alternate member to the CalOptima board, placed on the agenda an emergency update on CalOptima regarding the federal audit for next Tuesday’s public meeting.

According to the federal audit, CalOptima’s OneCare program jeopardized health care for up to 16,000 seniors. Auditors found many instances in which seniors who had a legitimate right to have prescriptions filled were improperly denied. There were also improper denials of medical coverage and emergency room payments, according to the audit.

“The chairman and I are summoning [CalOptima] CEO [Mike] Schrader to come front and center and update the board on what the hell is going on at CalOptima and why we are jeopardizing medical services to the most needy members of the public,” Spitzer said.

In 2011, county supervisors all but handed the reins of the agency to Nguyen through an ordinance change that passed on a 3-2 vote with supervisors Nelson and John Moorlach opposing.

Since that time, many top executives at the agency left and the board now includes several county officials that in essence work for Nguyen.

Nguyen’s dominance of CalOptima was on display Tuesday as she issued her first public comments about the agency’s reactions to the federal audit.

“No one was more surprised to hear this than myself,” Nguyen said from the supervisors’ dais on Tuesday. “Last year, CalOptima received second highest rating in the state.”

She criticized federal auditors for waiting to tell CalOptima about the problems they had found saying, “the health and safety of CalOptima members is my utmost concern.”

“It took them (federal officials) two months to come back and let us know,” she said.

Nguyen also revealed that over the weekend, she privately met with CalOptima board Chairman Mark Refowitz, who is also the director of the county Health Care Agency, along with executive staff to formulate a response to the federal audit, which was released Friday.

“CalOptima outcomes are good, but our process needs a lot of improvement,” Nguyen said.

While Nguyen publicly downplayed the significance of the audit, she told her colleagues that the agency would be hiring consultants and auditors to fix the problem, pointing to a memo she has sent the full board of directors.

Supervisor Pat Bates is openly questioning whether the federal audit is political, given that Nguyen has highlighted other federal audits that gave CalOptima good marks. Given that Nguyen is vying for a competitive election for the 34th State Senate District, Bates believes that much of the criticism of Nguyen’s stewardship of CalOptima is being politicized.

And just as Nguyen finished her update, Spitzer leveled harsh criticism at her, because when CalOptima officials received audit findings on Friday she instructed them not to brief him.

“If I’m being blocked from information at the direction of another supervisor, I can’t speak to it,” Spitzer said. “I plan to get briefed as soon as possible.”

Spitzer also publicly thanked Chief Administrative Officer Mark Denny for informing him of the situation on Friday night and issued a rebuke to Mike Ruane, CalOptima’s director of strategy and public affairs, saying “it’s completely unacceptable not to brief the board.”

Spitzer reminded Ruane and other top CalOptima staff that “they respond to the board, not to individual directors.”

Nelson seconded Spitzer’s concerns about CalOptima senior staff blocking information to other supervisors in an interview after the session.

Referring to Nguyen’s presentation, Nelson said, “I found it strange.”

He also took issue with Nguyen instructing CalOptima to not brief Spitzer.

“I find it odd if to have one board member telling staff to not brief another,” Nelson said. “That’s pretty bold to do something like that.”

Nelson said given all the concerns raised about CalOptima, it’s time to revisit how the board supervises the agency. “I think the [CalOptima] board is vulnerable just having one [supervisor],” he said, “and I want to revisit it.”

Nelson said he’d prefer to have Spitzer join that board, possibly as a full-time member. He’s even considering expanding the membership to more than two.

“I have felt, and I know Supervisor Moorlach has felt for some time, that the makeup of our representation should be different,” Nelson said.

Spitzer said the entire affair has him “very concerned about the future of CalOptima. I think it’s all in jeopardy.”

Spitzer said he has his own ideas about who should go onto the CalOptima board.

“Given the fact that the board was concerned about continuity, maybe Vice Chair Bates can go in and clean up CalOptima. She might be really good at it given her background as a social worker,” Spitzer said.

Given that Bates’ key support and vote for Nguyen’s ordinance change at CalOptima, Spitzer said, “she’s probably the best person to go in and fix CalOptima.”