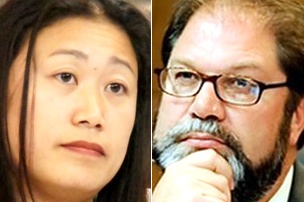 County Supervisor John Moorlach made it official Wednesday: He’s done with public life at the end of this year.

And he’s not wasting any time talking frankly about the world he’s leaving after two decades.

“It’s a dirty business,” said Moorlach, a two-term supervisor who just abandoned a congressional run. “A nasty industry. There’s definitely a dark side. You see too much.”

He said that to make it in today’s politics, candidates must constantly raise funds, even to the detriment of their official duties.

And then sometimes, alternatively, official duties morph into campaigning.

As an example, he pointed to the Los Alamitos police appreciation luncheon earlier this week.

Moorlach couldn’t make it to the luncheon, so he sent a staffer.

The staffer came back and said that at the event he witnessed a man, who was wearing a badge identifying himself as an employee of Supervisor Janet Nguyen, handing out certificates.

“We’re running into all kinds of people that work for Janet,” Moorlach said. “They are acting like county employees.”

Yet in today’s political world, Moorlach noted, “No one figures it out. No one calls anyone on the carpet.”

The race between Nguyen and Solorio is among the hottest statewide races of this election year, and Republicans are hoping that Nguyen can help break up the Democrats’ supermajority in Sacramento.

Nguyen did not respond to a request for an interview.

Moorlach said that throughout much of his career, he didn’t focus on traditional fundraising, noting that he was catapulted into public life by being the man who predicted the county’s 1994 bankruptcy.

“I have not been the professional politician. I was blessed with immediate international name recognition because of the bankruptcy. I never had to build the war chests,” he said.

The year after the bankruptcy, Moorlach was appointed as Orange County’s treasurer-tax collector and then won the office in the 1996 election. He led efforts to reach legal settlements with banks and investment firms that were involved in the bankruptcy.

He settled into the treasurer-tax collector’s job over the next decade and then in 2006 ran a successful campaign for supervisor based largely on his strong opposition to a large pension enhancement granted to general employees a few years earlier.

Moorlach made pension reform his signature issue during his tenure as supervisor, establishing a largely independent and conservative voting record while paying little attention to fundraising.

“I figured I’d raise money when I needed money,” he said. “I wasn’t as aggressive as others.”

Yet when he decided to run for Congress, that approach didn’t help his chances.

Given that state Sen. Mimi Walters had secured county GOP support for the 45th Congressional District, Moorlach was left to raise funds largely on his own. The entire campaign finance system apparently frustrated him to the point he decided to walk away from an expensive congressional race — without debt.

Many thought Moorlach would switch gears and run in one of two other elected offices where incumbents didn’t file to run — either the 74th State Assembly District or county auditor-controller.

Yet by the close of business on Wednesday, Moorlach stayed true to his word that he would likely stay out.

Moorlach said he’ll now center his time over the next nine months trying to finish up a series of goals such as implementing county mental health programs allowed by Laura’s Law; renewing a historic settlement allowing John Wayne Airport to operate near residential areas; establishing a year-round homeless shelter; and convincing Congress to pass legislation allowing workers to opt into a cheaper pension plan.

Then he plans to just take some time off, do some hiking, biking — even consider a column.

“I’ve had a wild ride,” Moorlach said. “Twenty years has been amazing.”