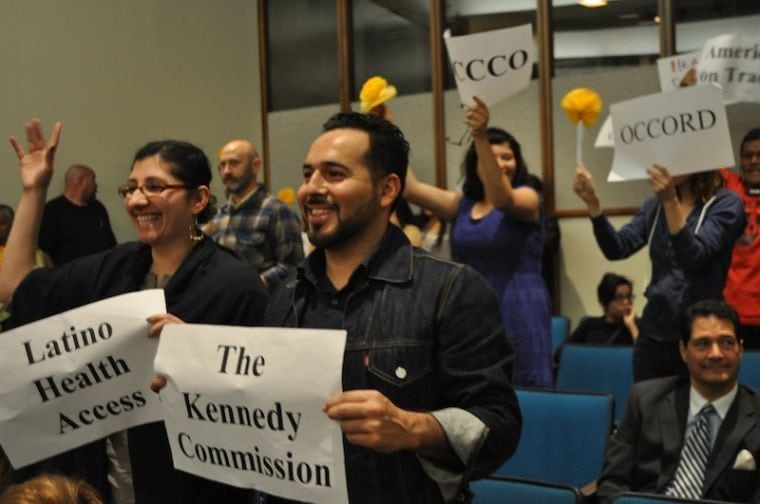 The Santa Ana City Council Tuesday night unanimously adopted a strategic plan intended to guide spending over the next five years, a step that city leaders and activists say will lead to a government more accountable to its residents.

Officials said it’s the first time that the city has sought the input of its residents and used that information to create a policy framework that reflects the community’s wishes. The plan’s adoption represented a “historic” and “new” day for the city, council members said.

“We will be able to walk away knowing we locked arms with our community,” said Councilman David Benavides. “It feels good to know we’re considering this.”

Activists with Santa Ana Collaborative for Responsible Development (SACReD) — the coalition of groups that lobbied hard for the government sunshine ordinance, which requires the plan — were also happy about its adoption. Dozens celebrated on the steps of City Hall with Son Jarocho Mexican folk music and ballet dancers in long colorful dresses.

However, it hasn’t been all good feelings leading up to the meeting.

At first, key policies that activists had wanted in the plan were left out of early drafts. They took their frustrations public, which triggered strong rebukes from some council members, who said the activists hadn’t appreciated steps the council had taken to benefit working-class Latinos.

But after the dust-up and phone calls from reporters, many of the policies the activists had wanted ended up in the plan. The document calls for restorative justice, emphasizes equity among neighborhoods and provides internships for youth.

At least a few residents were suspicious about the concessions made to SACReD.

City resident Thomas Anthony Gordon said that with those policies thrown into the document at the “11th hour,” it showed that SACReD activists had a level of influence over the drafting process that was unfair to residents not affiliated with the coalition.

“It corrupted the process,” Gordon said.

Mayor Miguel Pulido attempted to read a letter from another resident, Tim Rush, into the record regarding the plan. However, after protests from council members, who said that would be unprecedented, Pulido paraphrased the letter as saying not everybody had a chance to participate.

City officials said that the changes to the final draft were made in response to feedback from a community workshop in February. Assistant Finance Director Robert Cortez specifically denied that SACReD’s lobbying is what put the changes into the plan.

The biggest change SACReD was seeking actually didn’t make it into the document.

Activists had been calling on the city to including ending its contract with Immigration Customs Enforcement or ICE. The city jail, for a fee, houses ICE detainees.

“I’ve seen my neighbors not come back,” resident Giovanna Miranda told the council in a passionate plea. “Why is it that you can’t get rid of it?”

Taking federal inmates in exchange for payments helps the city offset the costs of running the jail, which was built in the early 1990s during a violent crime wave that had reached epidemic proportions. City leaders then decided to construct the jail because the county jail was so busy that it stopped taking misdemeanor offenders.

But crime has dropped significantly in the ensuing decades, and today the jail houses only ICE and U.S. Marshals Service detainees while running a multimillion-dollar budget deficit.

City Manager David Cavazos said that a jail deficit, not including indirect costs, of up to $5 million could grow to $7 million without the ICE contract. That deficit could in turn wipe out a projected surplus in the overall city budget and threaten other goals in the strategic plan, Cavazos said.

The first goal is to recover the costs of the jail, which he said would take about a year, Cavazos said. After that, officials can reconsider the ICE contract, he said.

Councilman Sal Tinajero described the strategic plan adoption as a turning point for the city, because a vast part of the community that had long been ignored now had a strong voice at City Hall.

While activists didn’t get everything they wanted, Tinajero said the all-Latino City Council, children of immigrants, were listening and trying.

Like the speakers, Tinajero said he had also known people who were deported. He noted that Councilwoman Michele Martinez came from an especially difficult background.

“At least give us the benefit of the doubt. It’s not black-and-white at times … because it’s very complicated,” Tinajero said. “But we’re trying to do our best for our community.”

Tinajero specifically thanked Martinez for predicting the city’s recent financial disaster and sounding alarms with her colleagues long before it occurred. Tinajero said that Martinez was also pushing for a strategic plan back then.

The council also included Martinez’s requested changes. Among other suggestions, she proposed shutting down Main Street on Sundays to create a safe walking corridor and creating a scholarship fund for youth sports.

Nancy Mejia, program coordinator for Latino Health Access and a member of SACReD, said that the next step for activists is to make sure that city officials stick to the plan.

She said that SACReD had so far accomplished its objective of organizing communities to participate in crafting the document.

“I, to an extent, feel our job has been done on that piece,” Mejia said.