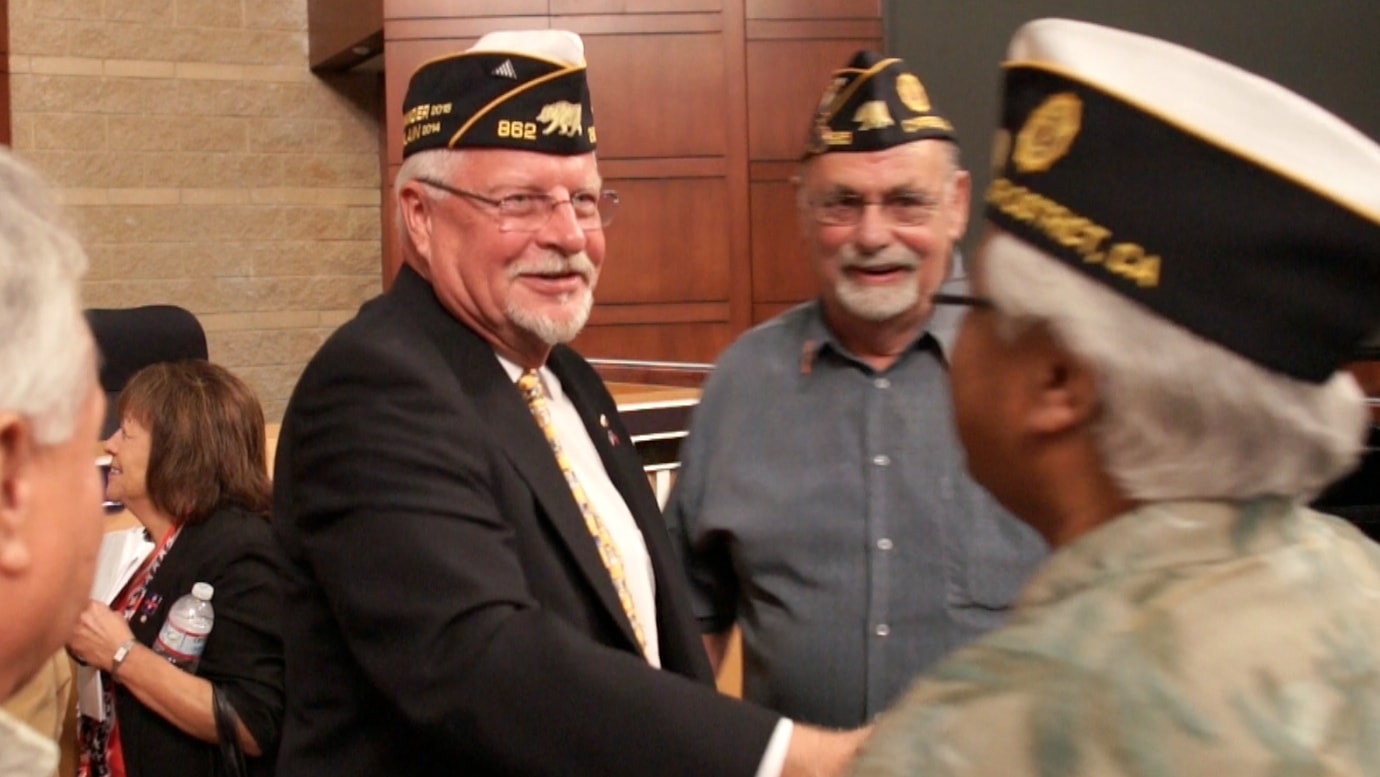 A unanimous Irvine City Council on Tuesday night moved Orange County one step closer to having its first veterans cemetery, after former service members and their supporters turned out in a strong and often emotional show of support for a site at the former Marine Corps Air Station El Toro.

Retired Army chaplain Tom Sandy told council members that the base was the last stop for thousands of American service members on their way to Vietnam and other conflicts, hundreds of whom never returned.

For “many of them that was the last time they saw the United States. For God’s sake, do the right thing,” he told the City Council.

Council members ultimately voted 5-0 to designate a 125-acre piece of city land adjacent to the Great Park for the cemetery. The Great Park and the proposed cemetery site next to it are the former El Toro Marine base.

When the vote was announced, veterans in the audience broke into loud cheers, as seen in the video below:

The decision came after dozens of veterans showed up for the meeting, sensing a majority of the city council members might be reluctant to approve the site before a key vote next month in the state Legislature.

Nearly two dozen people spoke, all in support of the Great Park site. Many wore their veteran hats.

The nearest veterans cemetery is in Riverside County.

Irvine resident Jane Olinger said the only cemetery opponents were FivePoint Communities executive Emile Haddad and his allies. FivePoint is building homes around the border of the former Marine base.

“Who are you going to vote for?” she asked the City Council. “The builder, Mr. Haddad? Or the voters and veterans of Orange County?”

Mayor Pro Tem Jeff Lalloway later thanked the veterans for their petitioning efforts and acknowledged the impact it had.

“I get the question: ‘Do you feel like the veterans pressured you?’ And I say: ‘Sure, they did and they should,’ ” he said.

After the vote came through in support of the site, Bill Cook, an American Legion commander and member of the city’s Ad Hoc State Veterans Cemetery Committee, was ecstatic.

“I feel like there’s really going to be a cemetery at MCAS El Toro honoring the veterans that have paid for the freedom of this country,” Cook said.

Advocates for the proposed cemetery and memorial said in recent weeks they detected a reluctance on the part of the council majority to move forward, given concerns expressed about the impact on nearby home sales by developer FivePoint Communities.

The developer is planning to sell most of its units to buyers from Asia, and a cemetery near the neighborhood is considered bad feng shui.

“Generally, being in close proximity to a memorial park is not good at all,” FivePoint’s feng shui expert, Angi Ma Wong, told the Orange County Register earlier this year.

When she learned that a street in the neighborhood would be named Arlington, Wong added, she “nixed it immediately” because it conjures images of Arlington National Cemetery.

The three-member council majority, meanwhile, said they whole heartedly support veterans, and that their earlier questions were merely a matter of ensuring the best site was chosen and properly vetted. The city council often splits 3-2 along partisan lines, three Republicans and two Democrats.

Lalloway, part of the GOP majority, said his questions “have been answered for me in a satisfactory manner.”

“I think now is the time to go forward with this. I appreciate all the folks that have spoken to us.”

Among council members, the chief advocate for the city land next to the Great Park has been Councilman Larry Agran, a Democrat, who proposed Tuesday night’s vote.

“This was far and away the best site that could be identified for a veterans memorial and cemetery,” said Agran, noting that the city’s committee largely built a consensus around the site.

Pete Katz, a Army veteran who served on the city committee, took issue with the idea that home sales or property values could be damaged. He pointed to high-end neighborhoods like Brentwood in Los Angeles, which sits next to a veterans cemetery.

Assemblywoman Sharon Quirk-Silva (D-Fullerton), who authored a bill that would establish a state cemetery in Orange County, urged council members to approve the site Tuesday night.

“Today is the moment, and you are part of a historic time. And we urge your vote,” said Quirk-Silva.

Her bill passed unanimously in the state Assembly and is now set for an Aug. 4 vote by the Senate’s appropriations committee.

The proposed site is owned by the city and was not designated for any purpose, officials said.

Neil Reich, who served in World War II, the Korean War and the Vietnam War, was among the 23 speakers who addressed the council. He said veterans came out to the meeting because they want the ability to be buried near their homes and families.

“We’re here because we want to be here, and we want to stay here,” said Reich.

Also on hand at the meeting was the Orange County Employees Association, which provided hot dogs for veterans and supporters who gathered before the meeting got underway. The union’s general manager, Nick Berardino, a former Marine who served in Vietnam, also came to the meeting.

Meanwhile, the cemetery’s completion still is a long way off, with several hurdles to clear, including passage by the state Senate, a signature from Gov. Jerry Brown and federal funding approvals.

And it remains to be seen who will cover cleanup costs, as well as what those costs could be.

The cemetery discussion has also sparked a broader dialogue about veterans’ issues in the city, particularly affordable housing.

Going forward, Lalloway said he and his colleagues are happy to discuss the creation of veterans housing at the ad-hoc committee.

Katz, meanwhile, said veterans fought for the very democratic system that empowers them, and others, to impact government decision-making.

“I just think that Democracy works,” said Katz. “It’s just very important that people stand up for what they believe in.”

“This is what America is all about. And that’s why we as soldiers fight and die, to preserve those rights.”