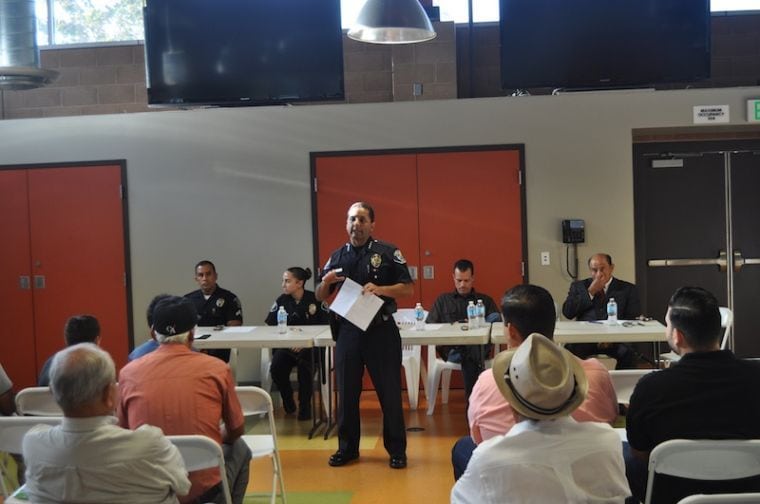 Santa Ana Police Chief Carlos Rojas and other local officials gathered at a forum Friday evening to hear from residents of a center-city community about violence and safety issues that impact their daily lives.

A chief concern among residents of the Lacy Street Neighborhood was the proximity of illegal marijuana shops to schools and homes. They also underlined the lack of a responsive and consistent police presence in the neighborhood.

More than 50 people turned out for the neighborhood meeting at the Latino Health Access Park and Community Center, which was organized by the Lacy Neighborhood Association. In addition to Rojas, Santa Ana City Council members David Benavides and Michele Martinez, as well as State Senator Lou Correa, were in attendance. Rojas and the other officials addressed the crowd in Spanish.

A flier distributed before the event summarized other concerns from residents, including:

Regarding marijuana consumption, Rojas pointed to a recent crackdown which resulted in the arrest of 42 people. Although the city banned medical marijuana dispensaries in 2007, pot shops have continued to operate in Santa Ana.

Asked about the progress of the community policing plan, an element of the city’s new strategic plan which calls for a survey and outreach on perceptions of law enforcement, Rojas said the meeting was the first step in the Police Department’s efforts to improve communication with residents.

“We still haven’t quite figured out what we’re going to do but there will be outreach soon,” Rojas said. “It’s a long-term effort.”

Rojas also told residents that he takes allegations of police misconduct seriously, and urged them to report any incidents to him.

While moderators kept the tone of the meeting positive, some residents challenged Rojas and the Police Department to take their civic commitment to Lacy, and other Santa Ana residents, more seriously.

“It’s not too much to ask, because it’s your job,” said one resident.