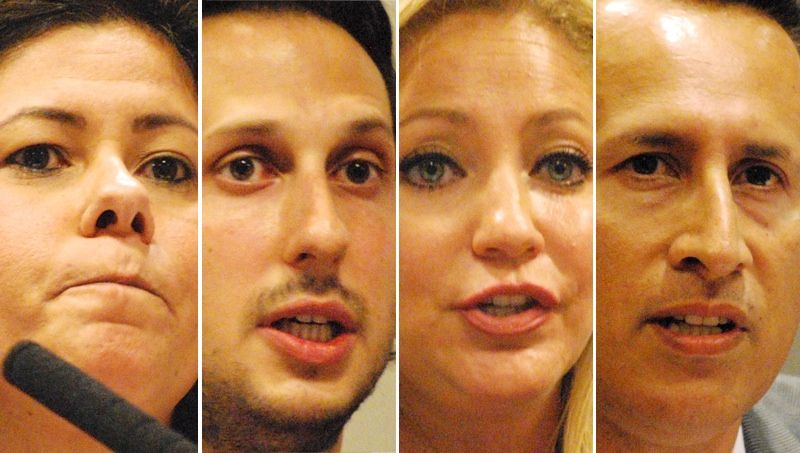 Candidates for Santa Ana City Council clashed Wednesday night in their first debate of the election season, sparring over questions about a proposed homeless shelter, mobile marijuana vendors and Santa Ana’s image problem, among others.

Over 100 people – many waving improvised fans to keep cool amid the stuffy heat in the building — attended the event at the Rancho Santiago Community College District headquarters.

Every candidate on the ballot attended, with the exception of Ward 4 challenger Alex Padilla.

The event was sponsored and organized by neighborhood organizations – including Com-Link, Connect to Council and NeighborWorks – and the Orange County Register. The first hour was a question-and-answer forum, while the second hour was a debate format.

In an opening statement that turned out to be his opening salvo against incumbent Mayor Miguel Pulido, mayoral challenger and sitting Councilman Roman Reyna pointed out that Pulido is under investigation by the district attorney. And he asserted that Pulido is facing a future indictment.

“When [the DA] is done, he’s going to bring charges,” Reyna said.

The investigation Reyna was referring to is related to a property swap between Pulido and a city vendor that netted the mayor a nearly $200,000 profit. Pulido received a house from the contractor for less than half fair market value, according to public records, and the vendor later received a no-bid contract with the city to provide auto parts.

Pulido didn’t address Reyna’s accusation. Instead, he highlighted the progress the city has made under his 20-year tenure as mayor, including a major reduction in crime. The downtown wasn’t a safe place to visit years ago but is now a thriving destination, he noted.

“Today, we’re not worried about bullets falling from the sky,” Pulido said.

Yet questions from the audience and statements made by other candidates often flew in the face of Pulido’s characterization of Santa Ana as a safe and thriving place to live.

Gilad Salmon, a web developer and challenger for Councilwoman Michele Martinez’s seat, said public safety is a big issue and that a person was shot outside his home recently. He said that he would spend more money on public safety and implement technology that would make the police force more efficient.

Mirna Velasquez, a business consultant who is also vying for Marintez’s seat, said council members need to take the whole picture of the city into account – improving schools, ensuring that people are safe and bringing more businesses to town.

Reyna said Pulido’s rosy synopsis of the city’s public safety situation shows how “out of touch” the mayor is on the city’s issues. Reyna went on to say city leaders need to first be honest about the city’s problems in order to solve them.

Pulido, meanwhile, noted positive comments from police officers and the blossoming downtown restaurant scene as evidence that the city is on the right track, saying the image will fix itself as more good things happen in the city.

“As we continue to move forward, the image will follow,” Pulido said. “We’re making real, real progress in the city.”

Tinajero also focused on positive steps in recent years, pointing to the city council’s efforts to overcome budget deficits that at one point had the city on the brink of bankruptcy.

Tinajero also touted other council achievements during the debate. The city brought in translation services for the city’s large Spanish-only speaking population, passed a sunshine ordinance that makes city government more transparent and brought in a new city manager who is going to streamline permit processing at City Hall, he said.

“Ladies and gentlemen we have turned a new corner,” Tinajero said.

One question from the audience put the candidates on the spot regarding a proposed year-round homeless shelter planned for an industrial section in the southeast section of the city.

Martinez pointed out that she voted against zoning for the shelter because of concerns from residents of the Lacy neighborhood. And she said bluntly that the city has been tasked with managing Orange County’s homeless problem for too long.

She also called for an immediate suspension of the current zoning that allows the homeless shelter.

“The city of Santa Ana has taken on the burden of homelessness for over 30 years… when is the rest of the communities in Orange County going to step up to the plate?” Martinez said to applause from the crowd.

Other candidates were more supportive of the city doing more to house and serve homeless people, but also with an eye toward addressing concerns of residents.

Salmon said the city should be doing more to offer mental health services, as many homeless people are mentally ill.

“We need a homeless shelter in this city,” Salmon said, adding that the city shouldn’t “shirk our responsibility to our fellow humans.”

Benavides noted that while other cities outright reject homeless shelters, Santa Ana is doing “something different from the status quo” by tackling the problem and allowing a shelter. But he also said the city needs to respond to residents’ needs and that he plans on working to address their concerns.

Regarding mobile marijuana vendors, every candidate said they would strictly regulate them.

Mark Lopez, another candidate for mayor, praised the mobile shops as a “great capitalist idea,” but said the city needs to regulate them so there would only be a few.

Reyna said that his father was a cancer patient who used medicial marijuana, so he saw firsthand its benefits to a seriously ill patient. But he also said he voted against the city’s ballot initiative to tax and regulate marijuana shops, and pointed out that Pulido voted for it.

Pulido urged residents to check the record themselves.

“Council member Reyna voted for these options before he voted against them,” Pulido shot back.

Tinajero urged residents to vote for the city’s initiative — which is competing with another initiative that would allow a larger number of marijuana shops in the city – because the city’s measure would allow stricter enforcement against mobile vendors.

But he also said that marijuana legalization is inevitable as a recent poll shows the large majority of Californians now support it. The city’s measure provides a framework for the city to be prepared for that day, Tinajero said.

“It’s going to be legal either way, so let’s be proactive about it,” Tinajero said.

Candidates were asked during the debate session about the city’s approach to being “business friendly.”

Tinajero said the council brought in a new city manager who is going to be streamlining the permit process. He said the city needs a “one-stop-shop” because “right now it’s a tangled web.”

His opponent Gonzalez responded with sarcasm: “You know what to do but you haven’t done it yet.”

Pulido pointed out that the city has 28,000 business licenses, an all-time high. And “it’s all happened under my leadership,” he said.

Reyna said he directed city staff to review lowering the business license fees. Then he said Pulido has a problem paying the taxes that fund city services, referencing a Voice of OC article on the issue.

“I’m a little curious how our mayor chooses not to pay his taxes,” but expects others to, Reyna said.

As Voice of OC reported, the county tax collector has even threatened to auction off the family’s auto care shop for nonpayment of property taxes.

Pulido explained that his family business was hit hard by a special downtown property tax that has since been dismantled. He said that although he was proud of his brother who runs the shop, Jose Pulido, “sometimes, you’re not your brother’s keeper.”

However, Pulido didn’t explain why he hasn’t paid thousands of dollars in delinquent state income taxes for his personal consulting business, The LaFarga Group.

In his closing statement, Benavides said he found it odd that his opponent Padilla not only didn’t show up to the debate, but hasn’t even voted in any general election in the city.

Rene Gomez, another candidate for Martinez’s seat, said that while the city has survived a recession, taxes are too high. He showed the crowd a copy of his water bill, which he said included $84.81 in taxes alone.

“Somehow the city came out of a recession, but we’re still getting taxes. We need to stop that,” Gomez said.

Pulido said the planned streetcar, considered his legacy project, would bring “hundreds of millions of dollars” to the city.

Residents interviewed by Voice of OC were generally unimpressed by the debate.

Paul Guzman, a resident who lives at 17th St. and Grand Ave., said the candidates were pandering to affluent residents and not the majority working-class population that lives in the city.

“To me, they’re speaking to the north side of town,” Guzman said.

Eddie Mireles, a former gang member who is now a pipe worker and foreman, said the candidates seemed out of touch with the average resident.

“I think a lot of these candidates should listen before they speak,” Mireles said. “Some of them just don’t know.”