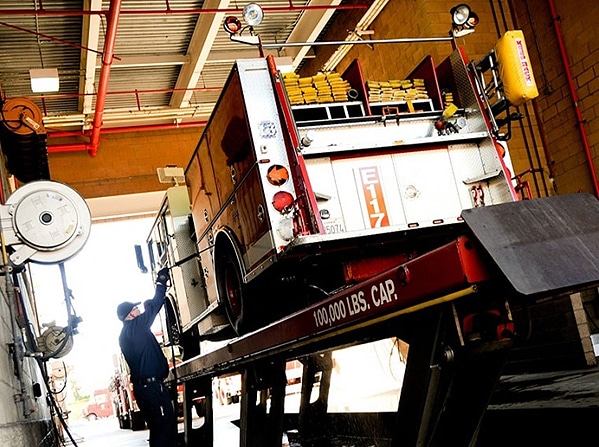 The Orange County Fire Authority is planning a groundbreaking pilot study in which private paramedics will for the first time be used on 911 rescue calls.

Currently, when Fire Authority paramedics respond to the most critical cases they get into the private ambulances and treat the patients as they are being taken to the hospital, with fire truck following. When this happens, both the truck and firefighters can be out of service for a considerable period of time.

Under the pilot program, the private paramedics would staff the private ambulances that transport Fire Authority patients in its 23 cities to hospitals — thereby keeping the public agency’s paramedics and engines more readily available for other calls.

New Fire Authority Chief Jeffrey Bowman outlined the plan during an interview Tuesday. He’s been presenting it in recent weeks to his board, the agency’s union, and other interested parties.

Orange County is the only county in the state without private paramedics. Local fire chiefs and unions have objected to them for a host of reasons, ranging from concerns that private paramedics would not have the same level of experience and training as public paramedics to fears that Wall Street would dictate the standard of care.

But Bowman, who’s served as chief of the Anaheim and San Diego fire departments, said the current system is inefficient and at times needlessly takes the Fire Authority’s highly trained paramedics out of action.

“The goal is to reduce the number of times a Fire Authority paramedic has to get in an ambulance for transport to a hospital,” said Bowman. “I have a big concern” about the current delivery model, he added, “it is not the best.”

Bowman is making a concerted effort to keep union leaders informed of his plans as part of an overall effort to improve management-union relations, which had soured during the tenure of his predecessor, Keith Richter.

Joe Kerr, spokesman for the Orange County Professional Firefighters Association, confirmed that union leaders have been informed of the plan and will take it up in January.

“The issue was broached,” said Kerr. “The department [Fire Authority] brought it up about a week ago.”

At various times since the Fire Authority was created, some form of redeployment change has come up every few years, said Kerr, declining to say this concept was any different.

Union leaders and other regional fire chiefs have remained adamant for years that staffing first-responding engines or trucks with two paramedics is best for patients. And Bowman agrees.

While it is too early to describe a system that may come out of the pilot study, Bowman anticipated it may be budget neutral for the Fire Authority.

This is because one of the advantages of a public system using private ambulance firms for transports is that those companies bear responsibility for the transport costs.

By the spring, Bowman said, he hoped to get agreement from the various parties to start the pilot — or pilots, as two areas may be tried initially, depending on the areas tested.

However, whenever it starts, he says it should be after the county Health Care Agency has completed the selection process for the new ambulance providers for 17 of the Fire Authority’s cities.

Tuesday, the county Board of Supervisors approved its latest effort to try to select the private ambulances that will serve five zones encompassing those cities.

Last February, the state forced the Fire Authority to relinquish the ambulance selection process, turning it over to the Health Care Agency, for having delegated too much authority.

At the lead of Supervisor Todd Spitzer [who represents the county on the independent Fire Authority’s 25-person board], the supervisors approved a new plan, whereby:

Proposals from the previous request process would be used, new evaluating panels and some methods would be applied, and boilerplate language would be added to protect against any legal challenges from losing ambulance firms. This would allow the process to be simplified to meet the deadline.

The state Emergency Medical Services Authority near Sacramento, which oversees such county emergency plans, only had a few issues with the plan and appears likely to approve it.

“Personally, I think what the Board of Supervisors did was in the best interest of the county,” said Bowman; “It’s a terrific idea.”

With a second proposal request, Bowman said, the competitive nature of the process would be diminished as the various bidders already have shown their individual plans.

The vote was 3-0, with Supervisor John Moorlach abstaining.

Spitzer pointed to the ever-approaching deadline for the county to wrap up the process, which is now March 3 after the state granted an unprecedented 90-day extension to the county.

Moorlach said afterwards he was uncomfortable voting on an issue about which he had unanswered legal questions. He declined comment on Bowman’s plans, which some observers would see as in line with the supervisor’s past pronouncements.

Correction: A previous version of this article gave an incorrect tally of supervisors’ votes on the selection process for ambulance providers. It also provided inaccurate context for comments by Supervisor Shawn Nelson. We regret the errors.

Voice of OC staff writer Thy Vo contributed reporting to this article.