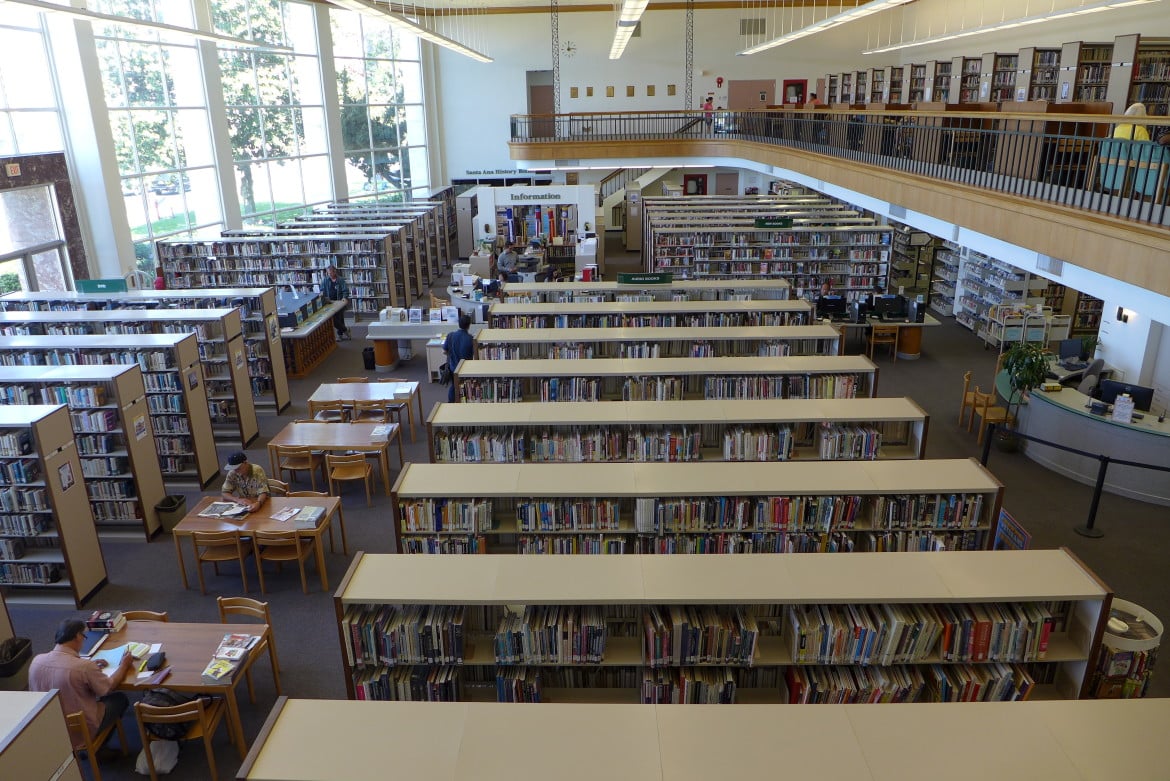 New books and Sunday hours could be coming to Santa Ana library if the city council approves nearly $300,000 in additional funding proposed in the city’s 2015-16 budget.

The trial budget includes $200,000 towards new books and materials, as well as $83,000 that would allow the main library in the Civic Center to open for four hours on Sundays.

“Twenty five years ago was the last time the main library was open on a Sunday,” said Parks and Recreation Director Gerardo Mouet, whose department absorbed the library in 2009.

Santa Ana has long had one the worst spending records on library services per capita in the state, spending $12.38 per resident in 2012. It has one main library and a small branch library, as well as two computer centers where residents can access e-books. By comparison, Anaheim has eight branches.

In terms of library space, Santa Ana ranks 178th, or third from the bottom in the state, with 0.15 square feet per person. This equates to about the size of a small envelope. In Anaheim, there is almost three times more library space per person than in Santa Ana.

California State Librarian Greg Lucas has described Santa Ana, where one in five people live below the poverty line, as a city with a much greater need for a public library than more affluent places.

“Libraries are the most welcoming place for society’s most disenfranchised people,” said Lucas, who visited the Santa Ana Library in 2014.

City manager David Cavazos pointed to the proposed budget increase for next year as part of a number of recent upgrades to the library. Last year, the city council approved $250,000 in new funds toward e-books and another $125,000 for a youth civic engagement program.

The main library and other Civic Center facilities also got wireless internet for the first time.

While the city is taking baby steps as its budget outlook improves, the library and youth-oriented services are high on his priority list, Cavazos said.

Cavazos is scheduled to present the proposed budget to the city council at a study session on May 16, with final adoption of the budget at a city council meeting on June 16.

Members of the Library’s staff say the city is in need of another full service branch, but that’s unlikely to happen soon. Cavazos said given the city’s limited funds, it’s more efficient for them to invest in books and e-books than a new, full-service library facility.

Under Mouet’s tenure, the library has added new computer centers to existing Parks and Recreation Department facilities, allowing them to spend their limited funds on materials.

“With the resources we have, the best thing to do is invest in books and e-library services, so the library can be available 24/7,” Cavazos said.

He attributed the new funds to a rosy economic outlook, projecting a $10 to $12 million operating surplus at the end of this fiscal year.

Still, many of the library’s most popular programs are funded by state and federal grants sought after aggressively by library staff.

For example, a federal grant funds a free afterschool tutoring program that is used by many parents who lack the language or education skills to help their own children with their homework.

Mouet praised the library’s homegrown staff, many who grew up in Santa Ana and benefited from working at the library, and returned after receiving an education to give back to the organization.

But staff can only go so far with a shoestring budget, he said.

“We’ve been doing the best we can with what we have, but you can only go so far — you need the materials and content,” he said.