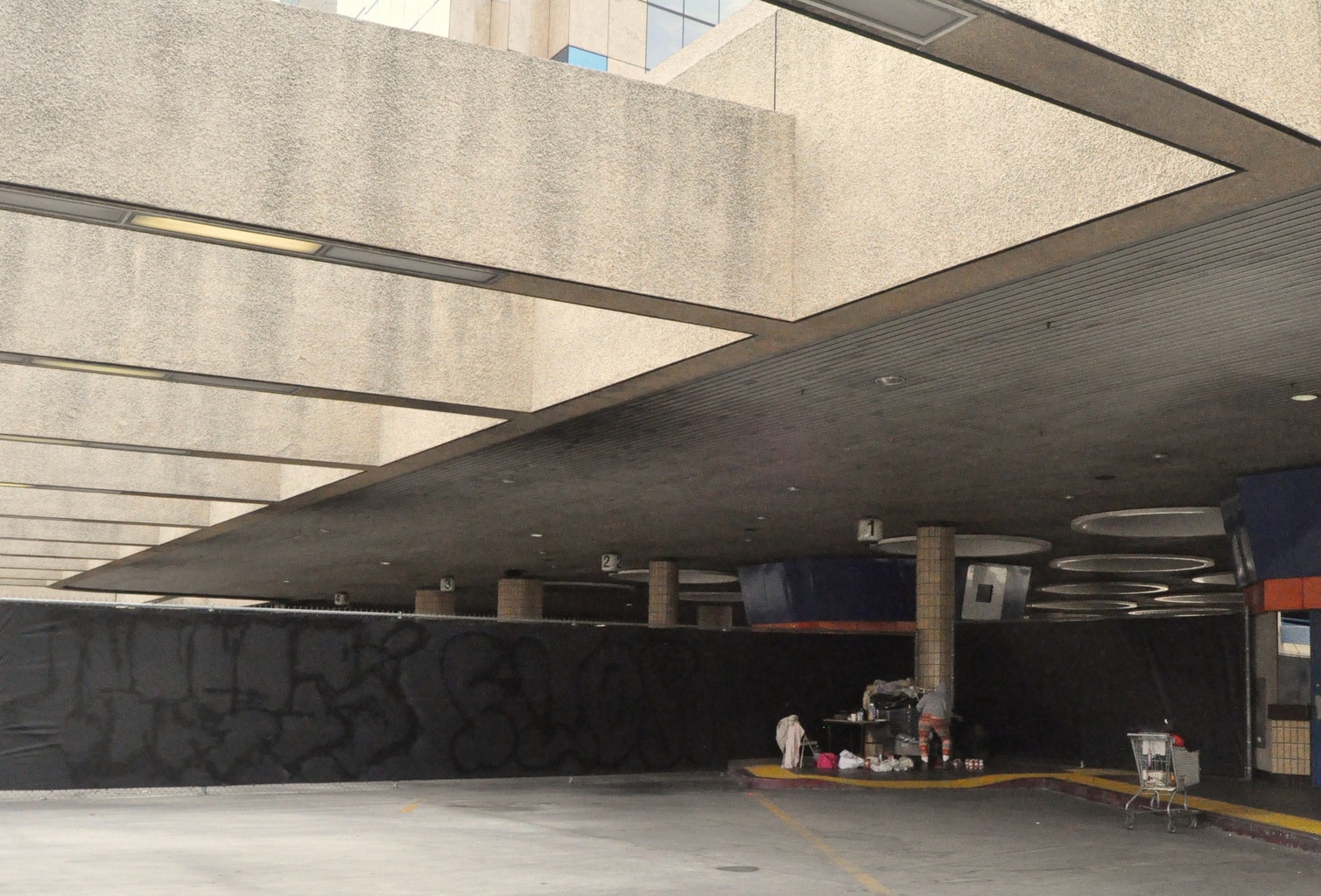 While Orange County Supervisors keep sticking out their collective chests and challenging cities across OC to set up homeless shelters, they continue to ignore the age-old adage that charity begins at home.

Note that Orange County is the largest metro area in America without any sort of full-time, permanent shelter.

Then consider the vast, abandoned Orange County Transportation Authority bus terminal that sits right across the street from the human sea of homelessness, hopelessness and despair that has sprung up around the civic center grounds over the past decade.

Orange County Supervisors’ Chairman Todd Spitzer called the situation “shameful” when he was sworn into office in 2012 during a moving speech at the old county courthouse that was supposed to get everyone moving.

“What are we doing to help these people get back on their feet?” Spitzer said to applause. “We really need to solve this problem.”

Except, Spitzer admits that after that speech, he’s never done much of substance on the homeless issue.

All initiatives that have value for a future Spitzer for DA campaign.

But zero value for the homeless, who sit camped out literally on the front steps of the Hall of Administration.

I have personally witnessed over the last decade, beginning as a county government reporter for the Orange County Register in 2004, how Orange County supervisors allowed the county civic center to turn into OC’s Skid Row through inaction.

I’m beginning to wonder whether this is just a reflection of how modern day Republicans view government and it’s capacity.

County supervisors seem OK having taxpayers step across a sea of misery to go pay their taxes. Almost an advertisement for how little government can do.

In ironically poetic fashion, that human throng is on display right next to the fading plagues supposedly honoring the county’s war heroes…another constituency our board consistently fails while making sure to wear American flags as ties and pins. 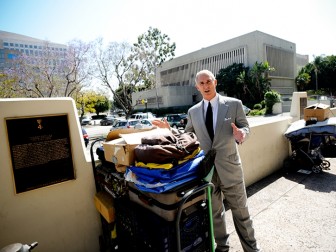 And just to add richness to the irony, many of the homeless are themselves veterans.

I have written too many times as a reporter about the burgeoning favela that has become our civic center. And year after year, it’s amazing to watch $6 billion worth of bureaucracts basically fold their hands, scratch their collective heads and come up with nothing.

In fact, our Board of Supervisors is amazing in their ability to do nothing, even when they seemingly vote to do something.

I still recall last fall, when then Supervisors Chairman Shawn Nelson declared to everyone present that a public vote of substance was being taken to make the nearby vacant bus shelter a homeless center.

It came after nearby neighbors in Santa Ana told supervisors they had zero trust in government leaders to site a homeless shelter in their neighborhood and be mindful of community impacts.

Supervisors attacked the neighbors as the ultimate NIMBYs; they attacked Santa Ana leaders — if you’ll forgive the metaphor — for throwing them under the bus when neighbors got angry, essentially backing up from a site they themselves had selected under state legislation that is supposed to fast track shelters.

In a bit of fury and rage, supervisors like Janet Nguyen and Nelson took issue with Santa Ana city leaders like Vince Sarmiento for criticizing them on lack of outreach.

Then they said they were done waiting for Santa Ana.

Nelson noted then-Supervisor John Moorlach’s efforts on the shelter, with whom I’ve had numerous private discussions, challenging him on how elected officials could allow people to sleep on pavement while an abandoned bus shelter is yards away.

Beyond just getting frustrated, Nelson declared a vote of substance that day:

“This is not to contemplate putting this at the bus terminal,” Nelson declared. “As far as I’m concerned, that’s where it’s going. I hope we get the support for doing that. That’s for another day.”

When does that day arrive?

It seems after that vote more than six months ago, there has been zero follow through.

Instead, Nelson and the rest of the board keep focusing on where to put a shelter — elsewhere.

Both those cities are taking the lead on this issue now, putting up significant funds to get a process going.

And yet the county Board of Supervisors sits – again forgive the metaphor – in the back of the bus, doing nothing.

Even worse is the farce that one shelter will solve Orange County’s problem.

If you talk to those truly serving the homeless, such as Catholic Worker activists like Massimo Marini and Dwight Smith, they will tell you that the real need is for an efficient, interconnected regional system that can take the chronically homeless and offer them affordable housing solutions.

Who wants to live in a shelter?

The reality is, we need a series of triage centers.

Places that can quickly identify a person with mental issues, and get them help. Identify a person on hard luck, and turn them around. Allow a person who’s fallen through the cracks to just sleep soundly, get a shower and get a fresh start. Identify a hardened criminal, and keep watch.

The abandoned bus shelter across the street from the board of supervisors has all those abilities and should be studied.

Supervisors should seriously considering redirecting any newfound monies as part of the annual budget process to start the process on their front steps.

A small investment could take that human throng on the civic center steps, give them a place to sleep, store their things and even be assessed by the army of bureaucrats that are in nearby offices at the Social Services and Health Care agencies.

Sheriff’s deputies who are now housed in a glass booth at the Hall of Administration could easily be headquartered at the bus shelter, allowing any decent person to get some sleep in a safe environment.

And when they wake up, the county should be helping them to get into real housing, not just a shelter.

Supervisors themselves have a homeless problem at the civic center. They shouldn’t try to just export it to Fullerton or Anaheim.

Supervisors have said they will do outreach on the Anaheim project, as they should, to see whether it’s a good fit for that area.

Yet the reality is there are homeless residents all over our county.

Each supervisorial district – including the First District that includes the civic center – should have their own centers where people can access assistance.

County supervisors are incredibly lucky that the Civic Roundtable (a city council of sorts for the homeless living at the civic center) hasn’t yet truly figured out how civic action really works.

Instead of “occupying” the outdoor civic center grounds, they should become regular attendees of the supervisors’ meetings every week, which are open to the public.

The day that lobbyists have to share a seat next to a throng of homeless residents all day on Tuesdays, that’s the day the bus shelter becomes an immediate reality.

To his credit, Moorlach kept quietly trying to push for the bus shelter while he was at the board of supervisors.

Yet he never got the job done.

He was too reasonable, too patient, and too deferential to his city and county colleagues.

And those homeless residents at the Civic Center are still sleeping outside.

The board of supervisors should ask themselves a hard question: Would the God they pray to at the start of each session leave these folks outside?

Would they not be the first priority?