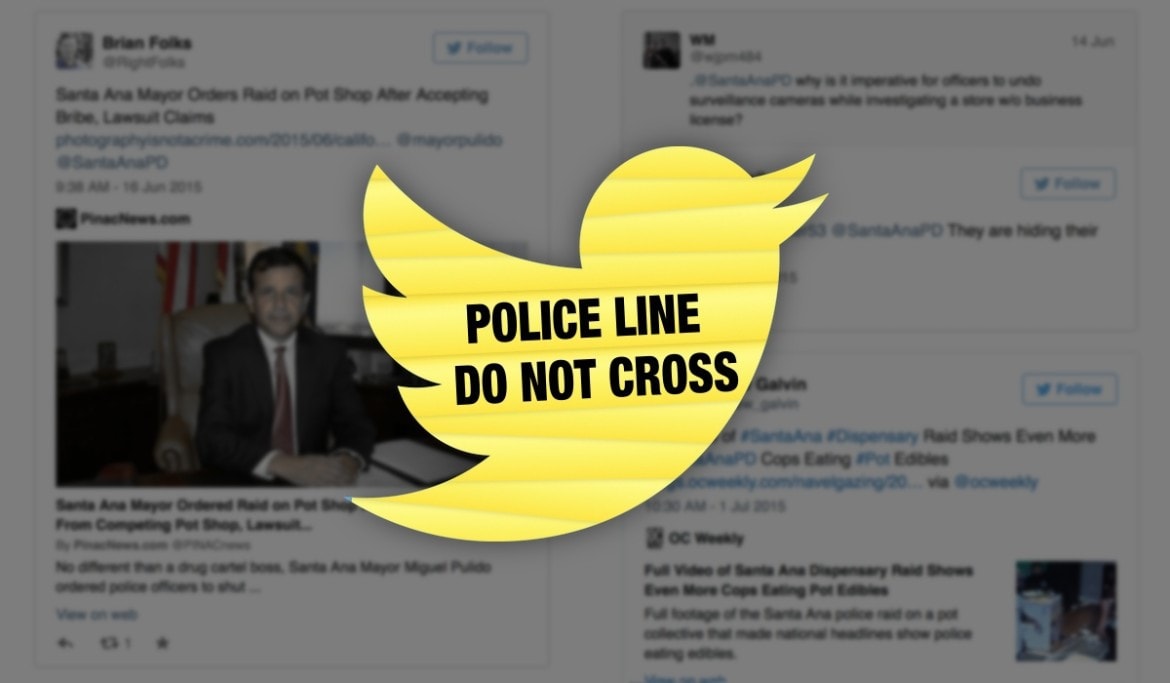 The Santa Ana Police Department’s Twitter account has blocked or muted dozens of Twitter users – in many instances after they tweeted comments critical of police officers — raising new questions about the public’s right to address their government in the era of social media.

Department officials aren’t talking about it, but based on a sampling of users who’ve been blocked or muted there seems to be a policy, whether official or unofficial, of blocking tweets that cast Santa Ana police officers in a negative light.

Twitter users can control who is able to follow them and which tweets show up on their main feed and in their notifications through the blocking and muting functions. If a user blocks another user, the user being blocked will not have access to the Twitter feed of the user doing the blocking.

In other words, muted users are under the false impression that @SantaAnaPD is seeing their tweets.

Sgt. Anthony Bertagna, the department’s public information officer, said management of the account is ultimately his responsibility. But he said he doesn’t know what the policies are on blocking and muting, and said another officer, Commander Christopher Revere, would be responding to questions.

“I wasn’t the one who blocked them,” Bertagna said. “I’m sure we have a policy, and if you send me the request, I will send it to Commander Revere who will get you a response.”

Revere never responded, and he did not return phone calls for comment.

The list of 24 blocked and 100 muted users came to light after Twitter activist Angela Greben obtained it under the California Public Records Act and posted the list on her Wage Theft Wedding Dress blog. Greben has been waging a one-woman crusade to shine light on government agencies and elected officials refusing to hear criticism of themselves on their Twitter profiles.

“Nobody’s talking about it. This is actually a big deal,” Greben said. “If we don’t fix it now, what’s to say social media is just an awful form where it’s just accepted that government blocks you from it… it can’t be acceptable now because we will have a scary social media future.”

Greben’s outrage notwithstanding, public officials and government agencies have no legal obligation to keep their Twitter feed open to users critical of the government, said Peter Scheer, executive director of the California First Amendment Coalition.

Several of the blocked and muted users tweeted comments related to the controversial pot shop raid in June during which officers appeared to be eating marijuana edibles.

For example, Brian Folks tweeted about the federal lawsuit alleging that Mayor Miguel Pulido has undisclosed financial interests in medical marijuana dispensaries. He then tweeted that officers were hiding “their own malfeasance” when they were seen on video taking down cameras during the raid.

After those tweets, Folks found himself blocked.

But it’s not just snarky tweets that seem too much for @SantaAnaPD. The department also blocked Jeff Gritchen, a photojournalist for the Orange County Register. Again, it’s not clear why, but Gritchen did tweet a photo in February of a crying woman who said she was the sister of a robbery suspect shot by Santa Ana police.

Also on the list of muted tweets is the Register’s former Santa Ana reporter, Andrew Galvin. Galvin had also tweeted about the video of the dispensary raid.

Galvin said he had no idea that his tweets weren’t getting through to @SantaAnaPD. He also said he believes government agencies should be willing to listen to criticism.

“I don’t think a government agency should be behaving like a person and picking and choosing who their friends are, and who they’re going to listen to,” Galvin said. “Something rubs me the wrong way about that… I don’t see any benefit to the government shutting out opinions they don’t like.”

Galvin speculated that he might have been blocked because of his reporting for the OC Weekly on a confrontation between activists and police at a Santa Ana City Council meeting. The incident, which was filmed and went viral on social media, began after the mayor tried to kick out an activist wearing a hat with the words “fuck the police.” The mayor ended up cancelling the meeting.

Greben says such actions are violating the due process rights of Twitter users. And although a blocked user can log out to see the blocker’s Twitter feed, Greben says that’s placing an “undue burden” on the public.

“It’s definitely a due process issue when the government takes away your liberties, and your liberty is reading the tweets they post,” Greben said. “Why should I log out and not be myself? I can’t respond. I can’t see who they’re following or who’s following them, and that’s important information too.”

Greben first experienced being blocked by a public official after she quit her job at a museum in San Jose and alleged wage theft. She said she tweeted the San Jose director of cultural affairs and asked the director not to support grants for a museum she believes was stealing her wages.

But the director was having none of it and blocked Greben, she said.

Scheer said that while he agrees that officials should be open and transparent with the public, he doesn’t think Greben has a leg to stand on legally.

In fact, There’s no true legal obligation for a government agency to listen to the public at all, Scheer said. There are some exceptions to that, such as during a court proceeding where the judges are required to read legal arguments, he said.

Another exception under California law is the Ralph M. Brown Act, which requires officials sitting on public boards to meet publicly and allow people a reasonable amount of time to address them on official government business.

“President Obama gets a million emails a day. Does that mean he has to open them all?” Scheer said. “Reluctantly what I would say about this is there is no First Amendment right to an audience… there really isn’t a right to be heard.”

However, Scheer said it’s obviously bad practice for government officials to be ignoring the public. Ultimately, however, ignoring the public’s demands, on social media or elsewhere, is a problem solved by the political process, he said.

“I think it’s bad policy to wall yourself off and not receive or listen to criticism, for sure,” Scheer said. “Any successful politician had better listen to complaints and messages from constituents, if that politician wants to get elected again or run successfully for higher office.”