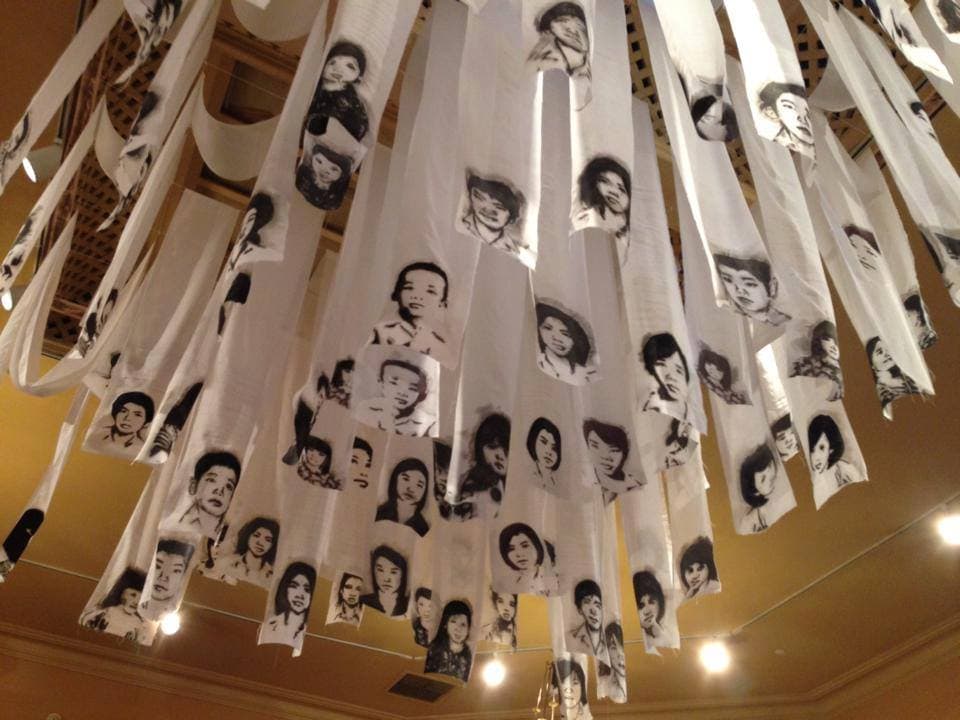 At the Viet Focus exhibit put together by UC Irvine's Vietnamese American Oral History Project, artist Trinh Mai Thach's installation "Quiet" consists of white cotton sashes, each painted with a portrait of a Vietnamese missing in their search for freedom. (Photo by Tien Nguyen)

The viral photo of the refugee child Aylan Kurdi from Syria drowning and washing up on the beach of Turkey struck a chord with Vietnamese-Americans, almost all of whom either faced similar dangers fleeing Vietnam by sea, or has someone in the family that did.

The plight of the Syrian refugees evokes deep sympathy from Vietnamese-American, who see themselves in it.

To physician and radio personality Mai-Phuong Nguyen, “Heartbreaking doesn’t even touch this level of loss and trauma.”

Teacher Ky-Phong Tran wrote, “I saw that photo of that little boy and thought of my little boys and I am not the same.”

The term “boat people” may or may not have originated with Vietnamese refugees of the 1970’s and 1980’s, but for us, we will always be the boat people, and when we see other boat people, we see ourselves. Their suffering becomes our suffering.

To Cathy Ngo, a finance professional born in the U.S., “the Syrian refugees remind me of my parents and other Vietnamese who were once refugees.”

Some made it on their first attempt. Most were unsuccessful, caught by police and coast guard, imprisoned, released, and then would try again. My brother Duc tried seven times before successfully landing in Malaysia.  My parents sent me off three times before we ran out of money.

Of those who made it out to international water, the United Nations estimated that a massive 250,000 died or were missing, because of storm, illness, food shortage, or they were killed or abducted by Thai pirates.

Think about it. One quarter of a MILLION people.

At the recently opened Viet Focus exhibit put together by UC Irvine’s Vietnamese-American Oral History Project and showing at the OC Old Courthouse until next February, artist Trinh Mai Thach installed a piece titled “Quiet,” consisting of white cotton sashes, traditionally worn at Vietnamese funerals, hanging from the ceiling. Painted on them were the faces of Vietnamese who went missing in their search for freedom, some at sea, others as they crossed Cambodia on the way to Thailand.

The piece struck Tien Nguyen, a software engineer, hard. “The faces look so young,” he wrote on Facebook. “I had to turn away. Why do the missing haunt us so, sometimes even more than the dead?”

“The faces, the hope, the faces. Heart-breaking,” he continued.

This shared community trauma will not go away easily. There have been second and third generation Vietnamese-Americans born in this country, and yet we still are and will stay a refugee community for a long time.

Mai-Phuong Nguyen’s husband Duc, who made the boat-people documentary “Bolinao 52,” initiated the “I Care Because” / “Nobody Deserves To Die At Sea” campaign to help the MOAS rescue organization.

Those joining include screen legend Kieu Chinh, the star of boat people movie Journey from the Fall and of The Joy Luck Club, where her character lost a baby while fleeing war-torn China. Garden Grove Mayor Bao Nguyen, born in a Thailand refugee camp of boat people parents, also joined in.

Tran, the teacher, launched a fundraiser online for the International Rescue Mission to coincide with his 40th birthday on September 6. Back in 1975, Tran was the first refugee baby to be born in Huntsville, Alabama. In 48 hours, he  raised more than $2000, and is continuing the fundraiser.

Similar actions are taking place across the country among Vietnamese-Americans of all walks of life.

Because, at the end of the day, it’s just a simple matter of refugees paying it forward.

CORRECTION: This story has been corrected to clarify that the “I Care Because” / “Nobody Deserves To Die At Sea” campaign was the initiative of Duc Nguyen in partnership with MOAS.

Voice of OC is interested in hearing different perspectives and voices. If you want to weigh in on this issue please contact Voice of OC Engagement Editor Julie Gallego at jgallego@voiceofoc.org.