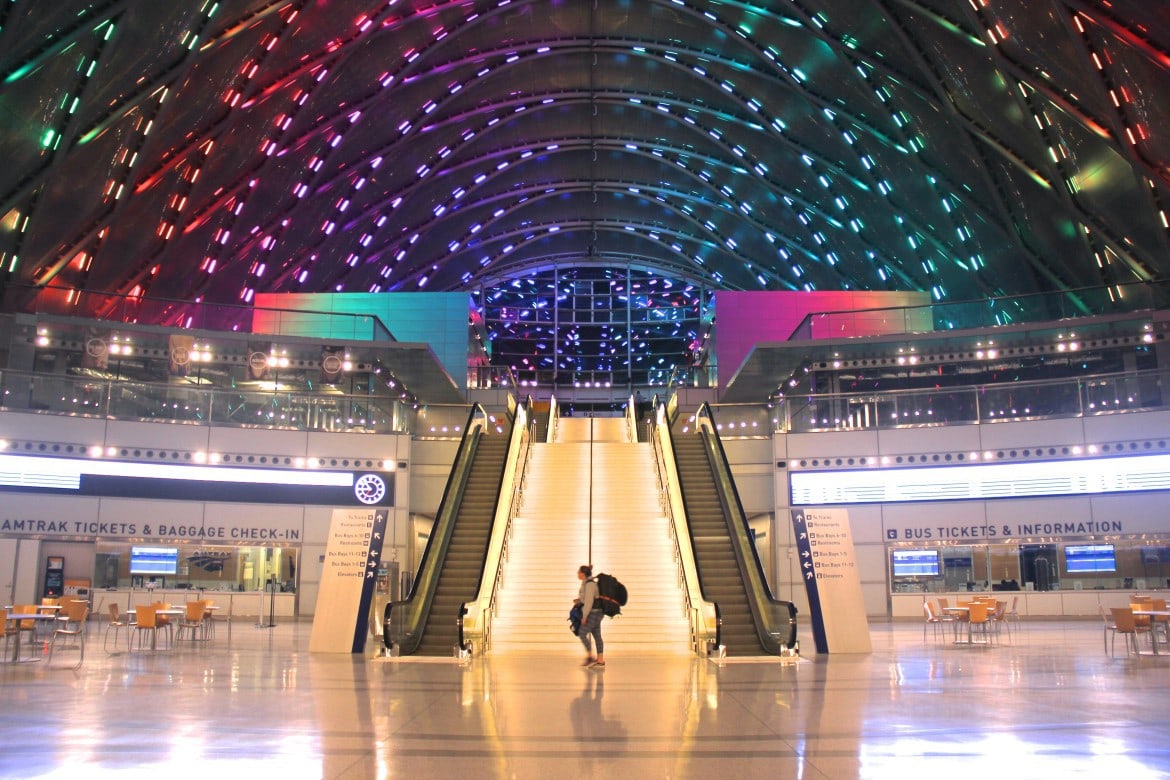 A traveller walks across the "great hall" at Anaheim's new transit center known as ARTIC.

As part of their ongoing sales pitch for ARTIC, Anaheim’s $185 million transit center, city officials have said revenue from advertising, naming rights and restaurant leases inside the massive new terminal building would cover its annual operating costs, which run close to $4 million.

But what if no one wants to go inside?

Since ARTIC’s opening last December, ridership numbers have fallen far short of expectations. Yet officials have preached patience and continued to insist that more daily riders will come.

However, many of those who are riding the trains and busses that come in and out of the station each day say they make it a point to avoid entering the glittering structure that has already become one of the city’s more distinctive architectural landmarks.

One is Angels fan Tim Riley, who likes taking the “Angels Express” train down to games from his home in Los Angeles.

“What is the purpose of that building?” Riley said. “I don’t want to go there. I’m trying to keep an eye out for my train.”

Riley isn’t alone in his hesitation. A number of travelers told a Voice of OC reporter that the long walk through the shell – across ARTIC’s “great hall” up to the second level, onto a catwalk and back down two flights of stairs — is a journey not worth taking.

One ARTIC employee estimated that 95 percent of ARTIC’s daily commuters never set foot in the shell. The employee, who did not want her name published for fear of reprisals, said daily riders demanded the right to park their cars in a lot behind the building designated for overnight parking just so they could skip the shell and go straight to the train platform.

During his visit to ARTIC, the Voice of OC reporter watched dozens of commuters do just that. They stepped off their trains and walked straight to the back parking lot. And even some of the commuters who parked in the front lot chose to walk around the building rather than through it. 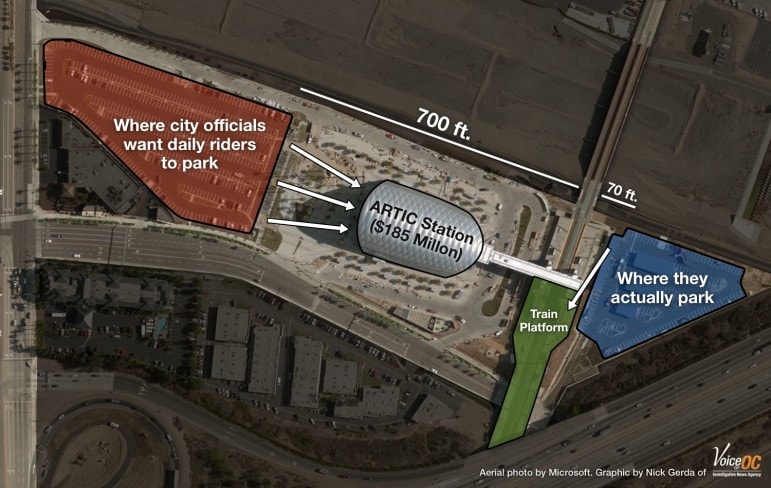 (Click on the image to view a larger version.)

So if ridership is lower than expected, and a majority of those who do use the depot avoid the building, is it reasonable to expect that the city will make much money from advertising, restaurant leases, and naming rights?

Probably not, said Dominique Hanssens, professor of marketing at the UCLA Anderson School of Management. “If indeed most people would miss the naming… then that would indeed be a problem,” Hanssens said.

He suggested city officials count the number of people walking through the shell. The city did hire Santa Ana-based consulting firm DKS Associates to do a more thorough count of the ridership at ARTIC, but the firm isn’t counting how many are actually traveling through the building, according to city spokeswoman Ruth Ruiz.

If a large number of commuters continue to actively avoid the shell and the city can’t realize any significant revenue from leases, advertising and naming rights, the $4 million annual operating cost would likely come out of the city’s general fund, which is meant for core services like police and fire protection.

Ruiz acknowledged that city officials had “heard from riders and seen how people are using ARTIC” and that they opened up the back lot to daily commuters to ensure “convenient and accessible service for those using the station on a daily basis.”

However, Ruiz insisted that while many daily commuters “want to quickly get to the platform and on their train, many other users utilize all that the station building has to offer.”

“They include bus riders, cyclists, leisure travelers, those attending sports and entertainment events, train enthusiasts on day trips and photographers who love to capture the station’s lights and architecture,” Ruiz wrote in an email to Voice of OC.

But as of last week, nearly a year after the facility opened last December, the restaurant spaces were still bare and didn’t look close to coming online.

And the majority of the people interviewed complained that the center didn’t seem designed with them in mind. They said milling inside the building might be risky because if your train comes even a fast sprint won’t get you to the platform in time.

Kevn Cook, an MBA student at Cal State Fullerton who was taking a train from Anaheim to Irvine, said he parked in the front lot and made the journey through the shell in the morning. But on his return trip in the afternoon, he realized he could get to his car faster by walking around the shell.

“It’s quickest to walk this way,” Cook said. “It’s not like there’s any reason you have to go in there. There’s nothing to do… to basically walk up and then back down… it’s kind of like, why bother?”

A woman named Rose — who didn’t give her full name — said she takes the bus daily to ARTIC and then hops on a train for the ride home.

The problem for bus riders, Rose said, is the bus pick-up area is too far from the train platform, making it easy to miss your bus.

“They didn’t even think it through. It’s really stupid,” she said.

A man who was sitting next to her then chimed, “it’s dysfunctional!”

And according to a bicycle advocate, it’s not just busses and trains that are inconvenient at ARTIC.

Brenda Miller, founder of the non-motorized transportation group PEDal, said ARTIC is a “beautiful” building, but its bicycle racks over by the Santa Ana river are in a “creepy” location. She said a more modern bicycle friendly facility, like those in Europe, have their bicycle garages inside the center.

“It’s kind of a creepy environment out there,” Miller said. “For a cutting edge facility, it’s horribly disappointing.”