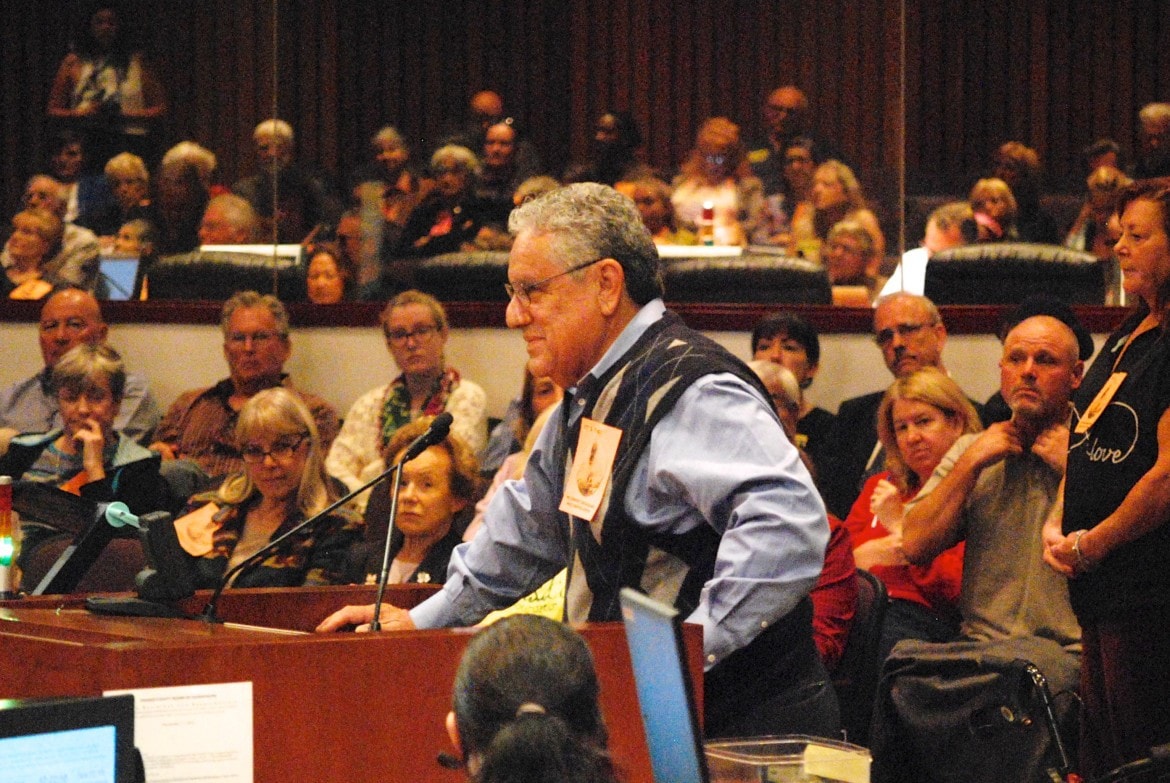 A public commenter at Tuesday's supervisors meeting, which was attended by hundreds of local residents.

Orange County took a major step Tuesday towards the creation of its first year-round homeless shelter, with county supervisors voting unanimously to finalize the purchase of an industrial building in Anaheim for a 200-bed shelter and service center.

It was the most significant step to date in the county’s effort to establish a year-round shelter, with earlier efforts in Fullerton and Santa Ana collapsing after heavy opposition from local residents.

Chairman Todd Spitzer said his decision was a difficult one, given concerns about how local businesses could be affected, but that there is a larger calling to do “the right thing” because “it matters for our humanity.”

“If we do it here and we do it right and we dispel all the myths [about homeless shelters], we can do this and we can solve the homeless problem in our county,” Spitzer said just before voting at Tuesday’s supervisors meeting.

Supervisor Shawn Nelson noted that the shelter won’t solve everything, but that “it’s the missing ingredient in the current system” in Orange County.

“It’s about time that we have a homeless shelter — it’s an easy vote because it is the right thing to do,” Nelson said.

Larry Haynes of the nonprofit group Mercy House – who many expect will be chosen as the shelter operator – said the stakes are high.

“If we don’t [create a shelter], people will die. It’s really that simple. If we don’t start taking care of the most vulnerable on the streets, they will die,” Haynes said.

County officials say the shelter, at 1000 N. Kraemer Place in Anaheim, would offer stays of up to 30 days per person along with support services like job search help, drug and mental health counseling, connections to veterans services, housing referrals, and other services. It is expected to open in late 2016 at the earliest.

Hundreds of people turned out for the meeting Tuesday, with impassioned pleas coming from residents and advocates on both sides of the issue.

Supporters, who significantly outnumbered opponents, recited religious teachings about caring for the poor, saying the shelter will make a big difference in helping people get off the streets and into housing, social support, and jobs.

Amy Glenaue, a mother of five young kids who lives near the shelter site in the Riverdale neighborhood of Orange, said her Christian faith plays a big role in her support of the shelter.

“If I’m teaching my children, as Jesus did, that every person has dignity and worth” then it’s important to support this, she said.

Greg Walgenbach, director of life, justice and peace at the Catholic Diocese of Orange, recounted Pope Francis’ recent visit to the United States, during which he urged action on homelessness.

“We can find no social or moral justification, no justification whatsoever, for lack of housing,” Walgenbach quoted Francis as saying.

Opponents said they were extremely concerned that the shelter would draw more homeless people with drug and mental health issues to area neighborhoods, and said they felt shut out by county and city officials.

“If your vote is yes, you jeopardize the well-being of a strong and stable community,” said April Allegro, adding that the shelter will affect activities at parks and thriving businesses.

“Should an unthinkable occurrence take place” because of the shelter, supervisors will be held accountable politically and morally, she warned.

Opponents also said thousands of people oppose the project, but couldn’t make it to Tuesday’s meeting because it was in the middle of the workday.

“None of us are convinced that this whole process is not rigged,” said Joan Vance, who along with her husband Chris Vance own the Piano Empire store across the street from the proposed shelter site.

County and police officials said they have developed a safety plan to minimize the project’s impacts on the surrounding neighborhood. For example, to cut down on people gathering near the shelter site, the shelter will not accept walk-in appointments, instead having shuttles take homeless people to and from the shelter from other locations.

Those assurances did not sway Keith McCullough, an attorney with the law firm AlvaradoSmith. McCullough told supervisors the site is “fatally flawed” and that the county failed to follow its legal duty to study alternative sites.

“The law requires that you investigate whether this site is the best alternative versus other alternatives,” McCullough said.

McCullough went on to say that he had previously encouraged supervisors to look at alternatives, yet instead there was “a rush” to this site.

County officials didn’t respond to his comments, which could foreshadow a lawsuit against the project under the California Environmental Quality Act. Opponents also claimed that the shelter would violate city municipal code by putting it within 1000 feet of a residential area.

In all, over 70 people spoke at Tuesday’s meeting.

County officials, meanwhile, said the shelter should actually reduce the impacts of homelessness on local businesses and residents.

“Bottom line, if we have a project like this, it’s gonna help the businesses” who are already dealing with homelessness, said Karen Roper, director of the county’s Community Resources department.

“It’s a win-win for everybody.”

“We will not disappear after this vote,” said Allegro.