More than 80 percent of California counties now provide at least some level of non-emergency medical care to poor undocumented immigrants, but Orange County is not one of them.

Every county has a program that provides last-resort and emergency health care for low-income adults who do not qualify for coverage through MediCal or private insurance through the state’s health insurance exchange, Covered California.

Until last year, only a handful of counties, including Los Angeles and San Francisco, extended this care to undocumented immigrants. Then in 2015, 39 more counties decided to provide at least some care for undocumented people.

Meanwhile, Orange County’s “Medical Safety Net” program, which provides limited “medical services to protect the patient from the loss of life or limb, prevent significant disability and/or the serious deterioration of health,” does not cover undocumented people.

And as the graphic below shows, Orange and San Diego counties are among the state’s largest counties that do not providing care to undocumented people. 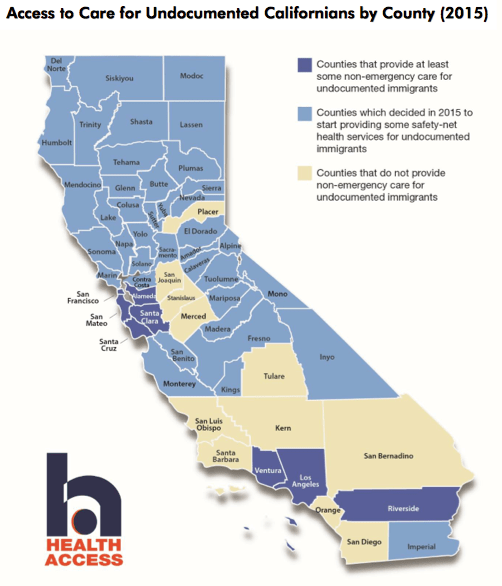 Here is a rundown from the California Health Report of how other counties expanded their last resort medical programs in 2015 to include undocumented people:

These changes are taking place as undocumented immigrants are projected to make up half of the remaining uninsured, according to the UC Berkeley Labor Center.

Although Orange County supervisors have signaled that they have no plans to provide health care to the undocumented, state legislation is moving in a different direction.

Senate Bill 4, which Gov. Jerry Brown signed in October, expands MediCal to include all children under 19, regardless of immigration status. This means CalOptima, the county’s health plan for poor and elderly people, now must also provide full MediCal benefits to low-income undocumented children who previously only qualified for limited benefits.

The agency estimates 6,800 to 13,600 of these children will be newly eligible when the changes kick in on May 1.