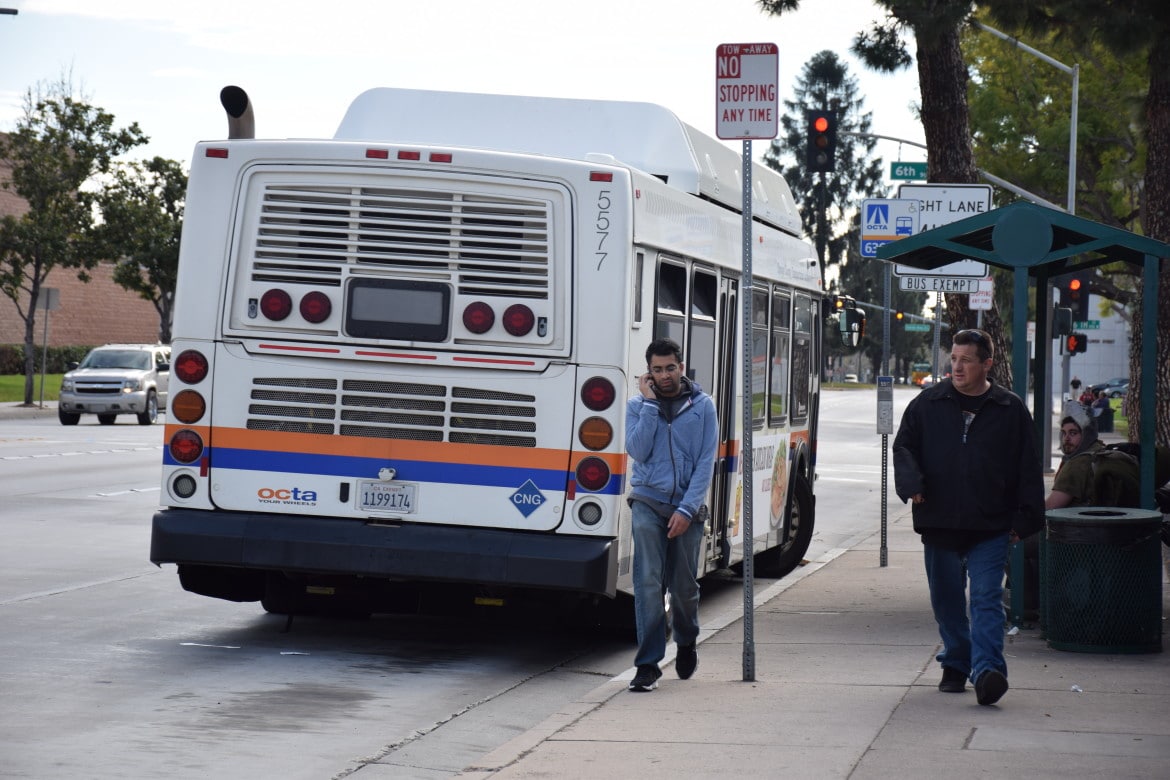 While the number of people riding public buses took a hit nationwide after the Great Recession, bus ridership is falling faster in Orange County than other Southern California counties, dropping by nearly 30 percent since 2008.

One of the biggest factors driving that decline? Service cuts.

When the Orange County Transportation Authority made its cuts, the agency focused on spreading them out relatively equally across the county, rather than cutting based on ridership.

This approach turned out to be a mistake. While transit agencies throughout the nation had to cut services due to declining revenues in the wake of the Great Recession, few saw ridership drop like it did in Orange County.

November 2015 marked 36 straight months of declining bus ridership for the Transportation Authority, with 20 million fewer boardings a year since 2008. Click on image to view an interactive graph in a new window.

Now the agency is proposing changes that would cut low-performing routes concentrated in south county and shift those resources toward improving services along more frequented routes in denser, central county cities.

“What we’ve heard from our riders is they really want more frequent service and service that gets them to go where they need to quickly,” said Transportation Authority spokesman Joel Zlotnik. “What OCTA is proposing…would put limited resources where they’re most needed, create a more efficient and cost-effective transit system.”

The number of buses operating at peak hours in went from 541 in 2008 to 428 in 2013, a 21 percent decrease, according to data from the National Transit Database. Over that same period, hours of service were cut by 21 percent.

“What that basically says to me is you will have as many riders as your provision of good service can reach. The cuts and the decline in ridership seems directly related to the cuts in service,” Anbinder said.

This played out in other Southern California counties as well. In Los Angeles County, where ridership has fallen by 11 percent, the agency has cut bus hours by nearly 12 percent.

In San Bernardino, a 3 percent cut in bus service since 2008 is about on par with the 3 percent decline in ridership. Omnitrans spokeswoman Wendy Williams attributed the decline in part to a 25-cent fare increase that went into effect in Sept. 2014.

In Riverside County, although the transportation agency has cut bus service hours by nearly 13 percent since 2008, ridership fell by just 2.6 percent in 2010 and has since increased by more than 18 percent above pre-recession levels.

Brad Weaver, a spokesman for the Riverside Transit Agency, attributed this steady increase in bus boardings to the success of an unlimited bus pass for college students paid for through their college tuition.

Although a number of conditions factor into ridership numbers — like population density, demographics and gas prices — many in the transit world see the quality of service as the number one factor. And that has been a problem in Orange County.

Researchers at San Jose State University’s Mineta Transportation Institute found in a May 2015 study that, when you control for those other factors, service levels are the strongest predictor of bus ridership.

“If buses don’t run as frequently…and they cut back service in terms of length of routes, people simply aren’t going to ride,” Anbinder said.

But balancing the level of service with the needs of the population is difficult.

“Every agency faces this trade-off: we have a limited pot of money, do we spread it around evenly and send a bus an hour to every neighborhood…or should we concentrate on a few routes in some areas?” said Anbinder.

While the right answer depends on each city, Anbinder said the new route changes appear to move toward industry best practices — away from a “social services” model of transportation focused on serving as many neighborhoods as possible.

“A bus that runs every hour is, at a certain point, not useful. There’s a recognition [in the transit world] that if you spread service so thin, it becomes virtually unusable,” Anbinder said. “Even for people who are desperate, if it’s not usable, they’ll find another way.”

The Transportation Authority official hopes the new changes — which, if approved, will go into effect starting in June — will boost ridership by 1.6 million boardings over the next three years.

The proposed changes cut routes largely located in Southern Orange County, as well as two routes that service Santa Ana, which has the highest boarding density in Orange County.

The Transportation Authority is also launching a small marketing campaign to boost ridership, including new branding on buses themselves, promotional videos aimed at young people, direct mailers, and a new mobile ticketing app that would allow riders to buy fares on their smartphones.

While time will tell whether these efforts improve ridership, Anbinder said bus service still takes a back seat in Orange County when it comes transit priorities.

“Cities and regions are investing heavily in car infrastructure, publicly and privately. In Orange County, the transportation priority for spending is widening the freeway,” Anbinder said. “You’re paying people to drive. People who have a choice choose to drive, because that’s what the transportation investment has prioritized.”