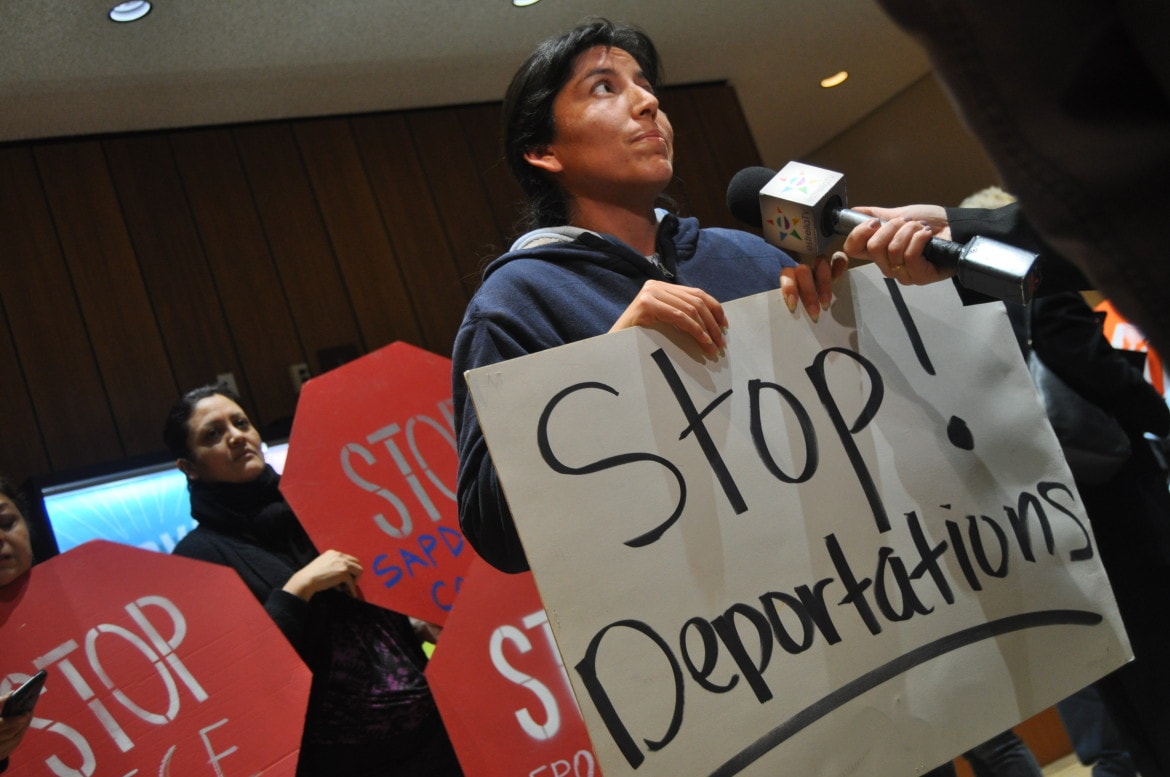 An activist opposed to the expansion of a Santa Ana jail contract with Immigration and Customs Enforcement is interviewed by a reporter with the Spanish-language station Estrella TV.

A proposal to increase the number of Immigration and Customs Enforcement detainees at the Santa Ana city jail  was scrapped after  a throng of activists expressed opposition at Tuesday night’s City Council meeting.

The scene Tuesday was the latest chapter in a long simmering saga regarding the decision by local leaders to hold immigration detainees in one of the most heavily Latino cities in the nation. This time, attention was focused on  LGBT detainees.

The city jail was built in the 1990s when crime rates were spiraling and the Orange County jail was so crowded it stopped taking misdemeanor offenders. City leaders floated a bond to pay for the jail’s construction, a debt that Mayor Miguel Pulido said started at $128 million.

Then crime rates started to decline and the city jail no longer imprisoned local offenders. To keep paying off the debt, the city contracted with the federal government to jail ICE detainees and U.S. Marshal’s prisoners in exchange for revenue. But even with the federal money, the jail has run an annual multi-million dollar deficit.

In a bid to pay off the debt earlier, City Manager David Cavazos proposed expanding the contract with ICE to increase the average daily bed rentals to a guaranteed 128  LGBT inmates daily — there are currently about 70 — and to increase the maximum number of ICE detainees jailed from 200 to 300.

The extra inmates were expected to bring in an additional $2.2 million annually.

But council members voted unanimously to scuttle the plan after dozens of activists showed up to the council meeting and blasted the idea as an effort to further profit from the suffering of undocumented immigrants. They said it was an offensive revenue tactic for a city that is nearly 80 percent Latino and home to a heavily undocumented population.

“We think it’s extremely shameful that the city is looking to in a sense cover its budget holes on the backs of undocumented people,” said Hairo Cortez, program coordinator at Orange County Immigrant Youth United. “We’re talking about an all Latino City Council about to vote on a proposal that would make Donald trump proud.”

The issue also brought out LGBT activists, including transgender women who said they were jailed at the facility and complained of abuse. Among other things, they said male police officers had conducted strip searches.

“In every instance we’ve documented at the city jail, women who are identified as female have been strip searched by men,” said Christina Fialho, co-executive director of Community Initiatives for Visiting Immigrants in Confinement (CIVIC).

The contract amendment also would have added a pilot transgender program, including a special “classification and care committee” that would draft the jail plans for transgender women. Among the considerations would be the preferred gender of the officer conducting searches.

Council members largely agreed with the activists who opposed the contract expansion. In addition to voting down the proposal, they also asked the city manager to start planning the phase out of the ICE contract.

Martinez also rejected a suggestion to postpone the vote.

“I am emotional to know the despair and the fear you are going through,” Martinez told the crowd. “I do not support the expansion of ICE here in Santa Ana. I will not support a continuance. I would implore my colleagues to have the courage and stand up for what’s right.”

After the vote, activists celebrated their victory outside City Hall and said they would be using the momentum to return and pressure the city to stop all collaboration with ICE.