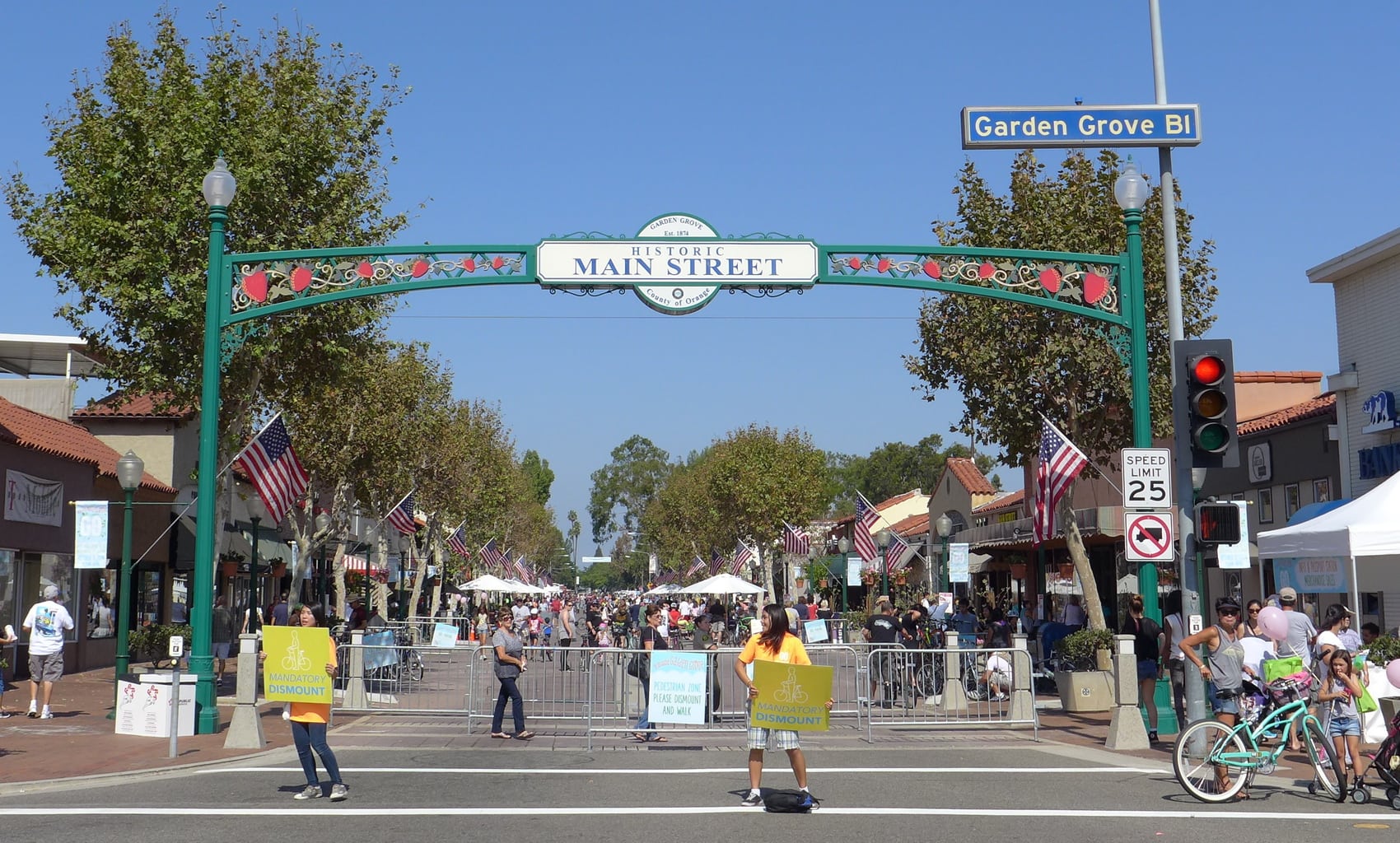 When Garden Grove City Council members vote on boundaries for new city council districts tonight, they will be making the biggest change to the city’s elections system in sixty years.

The change is the result of the settlement of a California Voting Rights Act lawsuit by a Latino resident and unsuccessful city council candidate that alleged the city’s at-large elections system diluted the vote of Latino residents, who make up 37 percent of the city’s total population but have never held elected office in Garden Grove.

Tonight’s final public hearing on the district boundaries will likely be contentious, as there is still strong disagreement among residents on major aspects of each of the five map proposals.

Although those involved in the mapping process mostly agree about how the east and west sides of the city should be divided, there is division between residents over how the lines should be drawn in Central Garden Grove.

There’s disagreement on how to draw the lines in central Garden Grove. Vietnamese residents want to see two districts with an Asian majority. Members of the Central Garden Grove Neighborhood Association don’t like how these three maps cut into a neighborhood that was the center of community organizing in 2003.

A map submitted by resident Kim Nguyen divides central Garden Grove into one district north of Chapman Avenue and two districts to the south, vertically divided by Brookhurst Street.

That same praise has angered other residents who question why race should be the leading factor in how districts are drawn. Others oppose Nguyen’s map because they believe drawing two districts along Brookhurst is counterintuitive to how residents live and interact, and because the line would cut into a central Garden Grove neighborhood that has been the locus of community organizing for over a decade.

Another map submitted by Planning Commissioner Andrew Kanzler uses Garden Grove Boulevard and the 22 Freeway as a dividing line. This map creates two racially competitive districts north of Garden Grove Blvd., and a majority Asian district south of the street, where the Little Saigon business district is centered.

Supporters of this map believe that creating two competitive districts is more representative of the city’s racial diversity, while some Vietnamese American leaders have objected to the consolidation of Little Saigon into one district, arguing that it would pack Vietnamese voters into one district and reduce the number of council seats available to them.

A third map drafted by the city’s paid consultant David Ely, is meant to be a compromise of the two public submissions. According to Ely, it includes two districts with an Asian plurality but divides the Central Garden Grove neighborhood into two districts, rather than three districts as seen in Nguyen’s map.

Two other maps emerged within the last week as a compromise between residents concerned about the division of central Garden Grove and those concerned about preserving the voting power of Vietnamese and Latino voters. 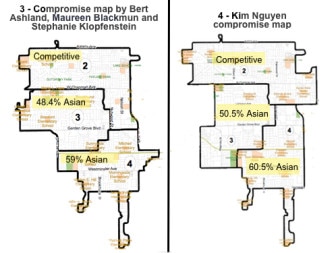 District 3 in the map on the left encompasses the entire neighborhood that Central Garden Grove Neighborhood Association members don’t want to see split up.

The neighborhood was a hub for organizing around a 2003 referendum to block plans for a gated community by Brandywine Homes, during which members of the Neighborhood Association gathered more than 8,600 signatures.

Latino advocates, however, are still concerned about whether the Neighborhood Association’s map weakens the electoral chances for Latinos. Although the total number of Latino residents is about the same, the advantage Latinos have over Asian and White residents is lower when considering citizen voting age population, an important metric for a group that has lower rates of citizenship. 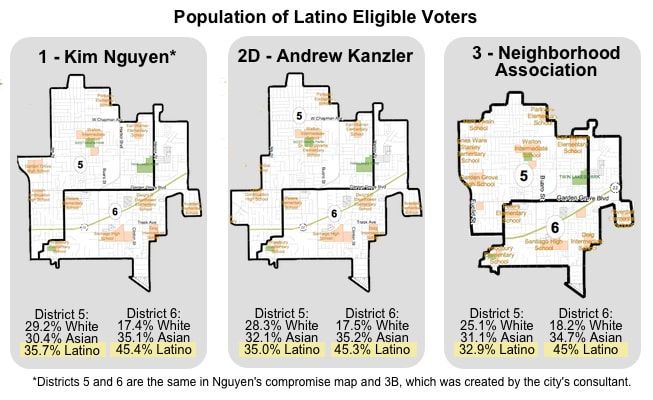 In Nguyen’s original map, Latinos have a 3.3 percent advantage over Asians among eligible voters. In the Neighborhood Association’s map, that advantage is just 0.8 percent.

Should Race Be a Factor?

One of the guiding principles behind how districts should be drawn is that residents with similar interests should be grouped together. Shared interests could be defined by a number of factors, like whether those residents speak the same language or live in the same apartment complex.

In general, the federal Voting Rights Act is intended to protect the right to vote of minority groups.

When it comes to political participation, some people view racial identity as a divisive factor. They believe that once a minority group is able to vote, it’s up to them to organize and get involved. Others place an emphasis on barriers to voting, such as low rates of citizenship, language, or the structure of an electoral system that make it difficult for a group to have their voices heard in politics.

The support for Kim Nguyen’s map has alarmed some residents who worry that divvying up districts based on ethnicity will only fuel racial competition, rather than collaboration.

“I believe this map process has gotten very racialized and I don’t like it,” said Liz Raganold at a public hearing on April 12. “I think now communities of similar interest still gravitate and flock together, especially if they need each other’s help.”

Others see Nguyen’s map as a power play for Vietnamese voters and have questioned whether special interest groups or the Democratic Party are behind the swell of support for her map.

At the April 12 public hearing, resident Josh McIntosh questioned the number of new faces, who had never been to a council meeting or participated in civic life before, now coming forth to support Nguyen’s map.

“Kim Nguyen pops on the scene — you have a very well-organized bunch of people who we’ve never seen or heard before. Somebody’s behind this, and they’ve got something very big at stake with her map,” McIntosh said. “Is it about power? Is it about getting more votes for Little Saigon?”

Those comments have rankled Vietnamese and Latinos advocates. Benny Diaz, the president of Garden Grove LULAC, objected to the accusations of hidden political motives behind the support for Nguyen’s map.

Demian Garcia-Monroy of Orange County LULAC said that while the ideal voter would examine candidates’ views and record, for many voters, race is still an important factor.

“The realities of a campaign, whether we like it or not, is that race becomes a big issue. Not everybody votes the way they should. People vote with someone of their background because they feel comfortable that they understand them,” Garcia-Monroy said.