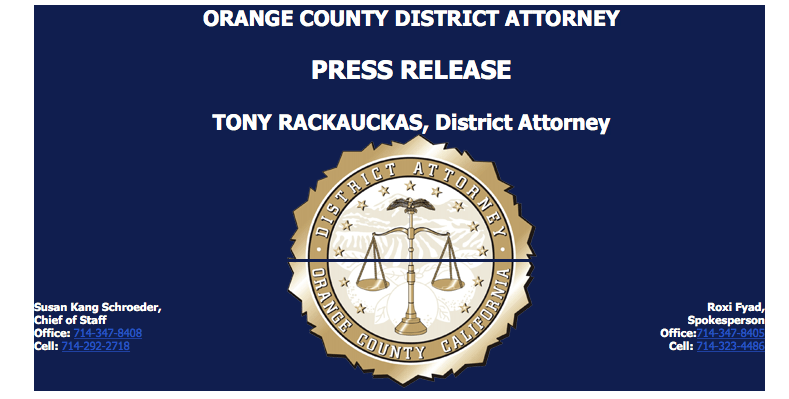 “The OCDA, Orange County, and the state of California have been grateful beneficiaries of the talent, passion, and knowledge of Assistant District Attorney Camille Hill,” said District Attorney Tony Rackauckas. “Camille’s technological innovation, immense knowledge, and dedication to ensuring that justice is secured have left a lasting impact on the OCDA and on the community as a whole. She will be missed by all of us and by me personally.”

“Camille’s loss is a great tragedy for the law enforcement and forensic communities,” said Senior Deputy District Attorney Scott Scoville of the DNA Unit. “Her passion and commitment to protect the community and expand the reach of DNA technology was beyond compare.”

Camille was born in Texas. Her career started in the world of forensics shortly after she graduated with her Bachelors of Science degree from the University of Maryland, College Park. After graduation, she worked for the Southwest Research Institute in Houston Texas as a research analyst. In 1980, she was hired by the Houston Police Department as a criminalist. During her four years with the Houston Police Department, Camille was promoted to the Laboratory Training Director before attending the University of California, Berkeley, Boalt Hall School of Law where she graduated in 1987 with her Juris Doctorate.

During law school, she was given the opportunity to clerk for the OCDA and after graduation she joined the OCDA as a prosecutor, where she stayed for the remainder of her career. After being assigned to various units, she worked in the Sexual Assault Unit from 1992 to 1997. During that time, she had numerous opportunities to handle and litigate DNA admissibility hearings and present DNA during trial. In 1999, she returned to the Sexual Assault unit with the primary purpose of focusing on DNA.

In 2000, under the direction of District Attorney Rackauckas, Camille formed the Innocence Project which was later renamed the Innocence Review Panel. The Innocence Review Panel reviews cases of incarcerated inmates who argue that they have been wrongfully convicted and determines whether any type of forensic testing, such as DNA or fingerprint analysis, would result in probative evidence that may exonerate the inmate or uphold the conviction. Since 2000, over 400 criminal cases have been examined. Of those, forensic analysis was used in seven cases and all yielded evidence confirming the inmate’s guilt. Camille was passionate that all who wanted to be heard were given the opportunity when forensic evidence was in question.

“It was as important to Camille that innocent people be exonerated as it was that guilty people be convicted. That, more than her ferocious intellect and her untiring dedication to her work, is what made her a great prosecutor,” said Denise Gragg of the Orange County Associate Defender’s Office.

As one of the resident experts of DNA in the law enforcement community, Camille handled the most serious of cases where DNA was a fundamental and critical aspect of the case, including the case of the man who was convicted and sentenced to death for kidnapping, sexually assaulting, and murdering 5-year-old Samantha Runnion. While litigating the case, Camille became the first prosecutor in the state to win an admissibility hearing for mitochondrial DNA.

“Camille Hill was instrumental in the prosecution of the man who murdered my daughter, Samantha Runnion,” said Samantha’s mother, Erin Runnion, founder of The Joyful Child Foundation. “She was incredibly knowledgeable, diligent, and always compassionate and forthright with our family. Her presentation of the DNA evidence during the preliminary trial set a precedent in California law for the inclusion of DNA evidence retrieved from animal hair. I will always appreciate and remember Camille for her passion for the application of science in the pursuit of justice. My heart goes out to her family, friends, and the countless people she helped.”

Between 2003 and 2004, Camille was one of the principal authors of Proposition 69, called the “DNA Fingerprint, Unsolved Crime and Innocence Protection Act,” which is considered one of the most powerful pieces of legislation passed to assist law enforcement efforts. She played a key role in implementation of Proposition 69, which substantially expanded the number of defendants who were required to provide a DNA sample for the California State DNA Database. In turn, the number of investigative leads increased significantly.

Retired Alameda County Deputy District Attorney Rockne Harmon, who worked closely with Camille in the development of Proposition 69, stated that, “On a personal level there was no kinder, more agreeable person. She did not need the spotlight, but she shone on her own in her efforts to make the world a better place. She will be missed, I miss her already.”

In 2014, Camille was selected to head the OCDA’s DNA Unit and continued in that position as Assistant District Attorney until her passing.

Camille is survived by her parents, siblings, nephews, long-time boyfriend, and many other loving family members, co-workers, and friends.

Camille was an avid lover of animals and owned two beloved birds and a Maltese-Poodle mix named Frodo. She also enjoyed roasting her own coffee and had a popcorn machine in her office which she was always delighted to share with everyone at the OCDA. Camille enjoyed riding motorcycles and also loved to sew and would often purchase used sewing machines to give to people who could not afford them.