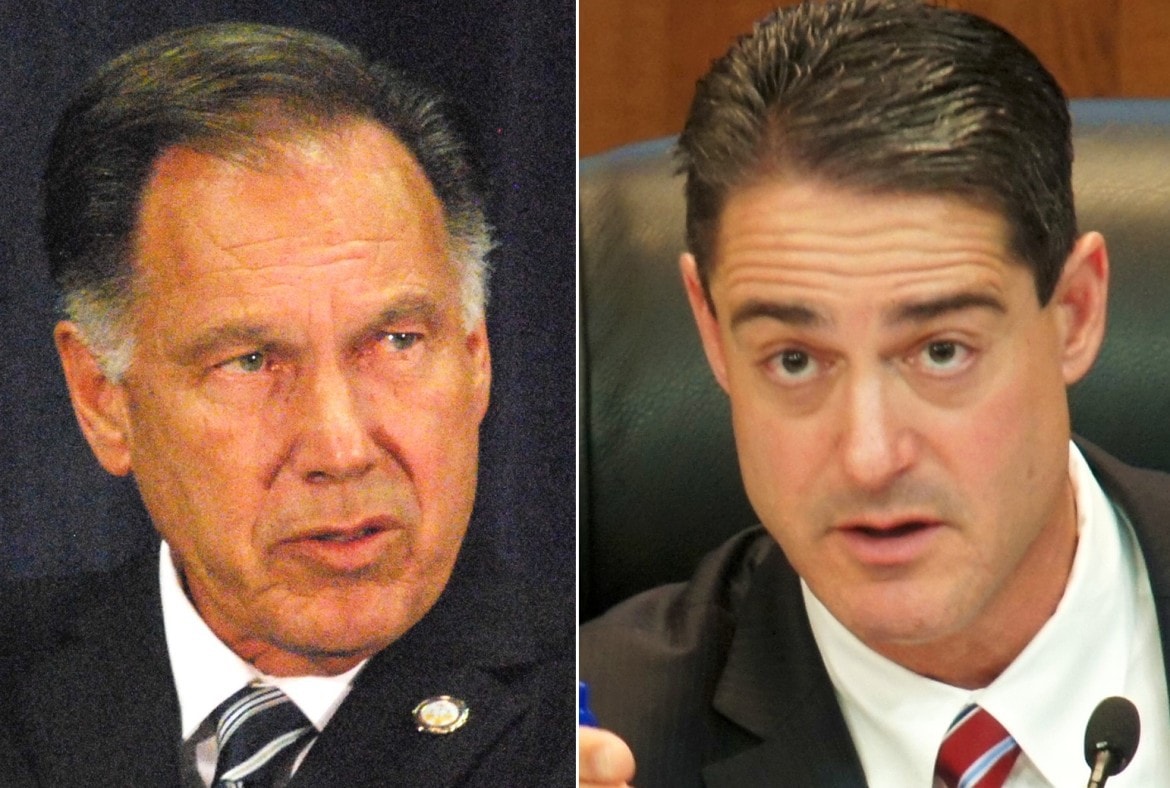 During a tightly controlled news conference, for which the media received scant notice, Rackauckas played a recording of a phone call sent to constituents on May 26 to promote Measure A, a measure on next Tuesday’s ballot that would establish a county ethics commission.

In the recording, Spitzer introduces himself as a county supervisor, then makes the statement: “I always play by the rules. As an assistant district attorney, I know that many politicians do not.”

Rackauckas pounced on the phrase “as an assistant district attorney,” pointing out that Spitzer has not been a prosecutor since 2010. “We hope that he does not insult the public’s intelligence by trying to claim this was all a big mistake,” Rackauckas said, reading from a prepared statement.

At one point, Spitzer had been Rackauckas’ hand-picked successor. But in August 2010 their relationship turned sour in a very public way after Spitzer, then a senior deputy district attorney, made a phone call to the Public Guardian’s office.

Spitzer characterized the call as a routine inquiry for an elder abuse case, while then-Public Guardian John Williams said Spitzer attempted to get private information by overstepping his authority, a complaint that resulted in his firing.

Rackauckas, whose fiancee Peggy Buff was working in the Public Guardian’s office, fired Spitzer, saying his inquiry was improper. That set off a feud that has only intensified in the years since.

On Tuesday, Rackauckas called on Spitzer to apologize publicly, promise to stop impersonating members of the District Attorney’s office, and to send another phone call to the same constituents, paid for with his own funds, “correcting the false identification.”

Rackauckas also sent a letter to the County Counsel’s office asking for information about whether any county funds were used to write, record or distribute the phone call.

He also played a clip posted to Youtube of a television interview where Spitzer, commenting on a manhunt for killer Christopher Dorner, said he was “LAPD between 1990 and 2000.” Spitzer was a volunteer reserve officer for the Los Angeles Police Department but was never a full-time officer.

“The only person who could misinterpret what I’m saying in this robocall is a paranoid district attorney who has failed to do his job,” Spitzer said. “This hastily called press conference is nothing more than retaliation for a series of events that have occurred over the course of the last week.”

One of those incidents occurred at a May 24 supervisors’ meeting, where Spitzer raised questions about the role of Rackauckas’ chief of staff, Susan Kang Schroeder, in getting donors and equipment for an official event for the Human Exploitation and Trafficking (HEAT) unit held by the DA’s office in 2014.

As Voice of OC reported last year, Schroeder used the 2013 event to promote the singing career of her then-business partner, Scott Foster. He performed at the event again in 2014.

Schroeder and Spitzer are likely candidates to run against each other for DA in 2018, if Rackauckas doesn’t seek re-election.

Schroeder is a member of Rackauckas’ inner circle and his 2014 re-election campaign manager.

Spitzer questioned whether the donations received for that event should have been reported by Rackauckas as behested payments – a requirement for public officials who solicit donations on behalf of nonprofits.

Although it was an official DA’s office event, fundraising was channeled through a county contractor, the non-profit County Service Programs Inc. A spokeswoman for the non-profit said last week they would not release the names of financial contributors to the official county event.

An official with the FPPC declined to comment on Spitzer’s allegations without further details.

Responding to questions from reporters, Rackauckas denied that the press conference was related to Spitzer’s criticism of his office.

“At this point, I’m not seeking to file any criminal charges. What we need to do is straighten out this misrepresentation and false impersonation,” Rackauckas said. “The message is that Mr. Spitzer is not an assistant district attorney, and he’s not speaking for the DA’s office. And the Orange County District Attorney does not take any official position on Measure A.”

Rackauckas also questioned why the robocall did not disclose the candidate or campaign committee that paid for the call, a disclosure which is required by state law.

“There are many unanswered questions — who wrote the script, were any county staff or equipment used?” Rackauckas said. “Who is he protecting from public disclosure?”

The call was paid for by a campaign committee known as Citizens for an Orange County Ethics Commission, according to campaign finance watchdog Shirley Grindle, who helped draft Measure A and is the committee’s treasurer. Grindle said she was not involved in the production of the call.

“The way these are always done, we get a call-in number and a script, and it’s up to the entity who is recording the call to format it. I did it on behalf of and at the request of the committee,” said Spitzer.

Asked Tuesday whether he is running for District Attorney in 2018, Spitzer said he has not made any final decisions.