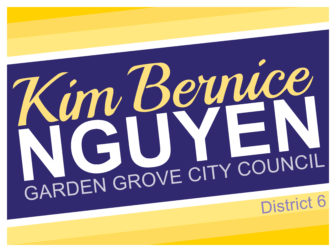 Councilman Kris Beard began serving on the City Council in 2011 and was elected to his current term in 2014. Kris Beard has been active in the community for several years. Prior to being on the Council, he served on various city commissions and volunteered in numerous community organizations, including the Garden Grove Community Foundation, Rotary Club, Boy Scouts of America, and the Garden Grove Sister City Association. Like Ms. Nguyen, Councilman Beard is a strong advocate for public education and is a proud UC Santa Cruz alumnus.

“Kim Nguyen has shown the essential qualities, namely leadership and compassion, needed in a public official,” said Councilman Beard. “With her intricate knowledge of Garden Grove’s cultural, demographic and economic dynamics, Kim can help to lead our great city to an even brighter future.”

“I’m honored to receive this endorsement from Councilman Beard,” said Kim. “I look forward to our working together to keep neighborhoods safe, improve the local economy, and further a hometown pride we all cherish.”

Councilman Beard’s endorsement sends a clear message that Garden Grove welcomes new leadership that brings a fresh and positive perspective and can move the city forward into the next Century while maintaining a bridge that also preserves its great heritage.

Kim Bernice Nguyen became a Garden Grove resident early in life. At age 10 she entered the Garden Grove Unified School District and eventually graduated with honors from Santiago High School. She went off to college attending UC Santa Cruz, and upon graduating with a B.A. degree in Politics, with an emphasis in Legal Studies, Kim came home to Garden Grove. She has since started a career in public service working as a Clinical Systems Administrator with the non-profit, public health organization, CalOptima. Most recently, Kim was recognized for her tireless work in creating new voting districts within the city. Her commitment to citizen participation and her unique ability to bring people together played an historical role in bringing about fair and balanced voting district which embodies a legacy which will endure for years in Garden Grove.