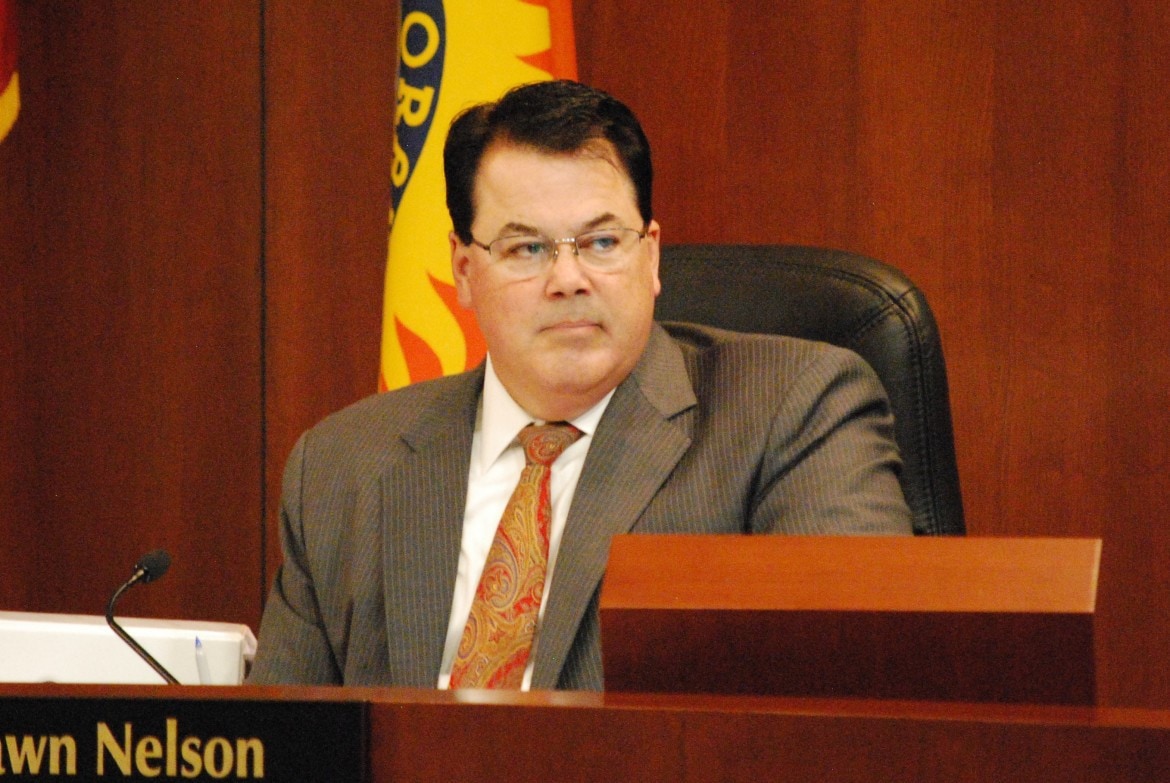 Michelle Rubio for Voice of OC

For the second time in as many public meetings, Supervisor Shawn Nelson agendized a proposal to extend supervisors’ term limits, only to pull it before a vote could be taken.

But unlike the July 12 meeting, Nelson deleted the item from the agenda Tuesday rather than reschedule it for the next meeting, meaning the issue is likely dead.

Nelson’s proposal, which was met with a barrage of criticism from fellow Republicans, would have asked voters in November to extend the limits from two four-year terms to three terms and impose this as a lifetime limit.

The effort had prompted allegations that Nelson was making a last-minute deceptive move to benefit himself.

Nelson will be termed out in late 2018 under the current law. But under his proposal, Nelson’s term limits clock would reset to zero, giving him up to 12 extra years as a supervisor.

Supervisors Todd Spitzer and Michelle Steel have spoken out against the proposal, so he needed supervisors Lisa Bartlett and Andrew Do to get it passed. Do was absent for the July 12 meeting, so there was speculation that he could be the swing vote in Nelson’s favor.

But his action Tuesday, with the full board in attendance, is a strong indication that he doesn’t have the votes he needs. Theoretically, Nelson could bring back his proposal for one more try before the Aug. 12 deadline to get it on the November ballot. But if that were his intention, he likely would have scheduled another vote for the supervisors’ Aug. 9 meeting.

Nelson didn’t return a phone message seeking comment or speak about the item at Tuesday’s board meeting. No other supervisors spoke about it.

In justifying his proposal, Nelson has argued that it takes years for supervisors to get up to speed in understanding the complexities of county government and policy.

“Forcing an individual out of office after eight years of service (as is current practice) only diminishes a Supervisor’s and his/her staff’s ability to capitalize on the years of education and experience to achieve significant and sustained reforms on behalf of Orange County taxpayers,” wrote Nelson and his chief of staff, Denis Bilodeau, in their staff report on the proposal.

Nelson has also said he isn’t planning to seek another term as supervisor in 2018, instead aiming to run for a judgeship.

But Spitzer and Steel – as well as a prominent local Republican activist – cried foul.

“With no conversation about this, there are a lot of frustrated people that are very angry…this thing came out of nowhere,” Spitzer told Voice of OC.

“He’s made campaign promises [before], and then he’s figured out how to get around those campaign promises,” Spitzer added, referring to Nelson’s now infamous gambit to collect a county pension after vowing during his campaign to refuse one.

“Nelson’s proposal also cynically is framed to ask voters if they want a three term-limit for Supervisors, without making it clear that there is already a two-term limit in place!” Fleischman wrote.

Other observers have noted that if Nelson truly isn’t interested in benefitting from the term limits extension, he could seek to have it placed on the November 2018 ballot. In that scenario, Nelson couldn’t run for re-election that year but the extended term limits would still take effect.