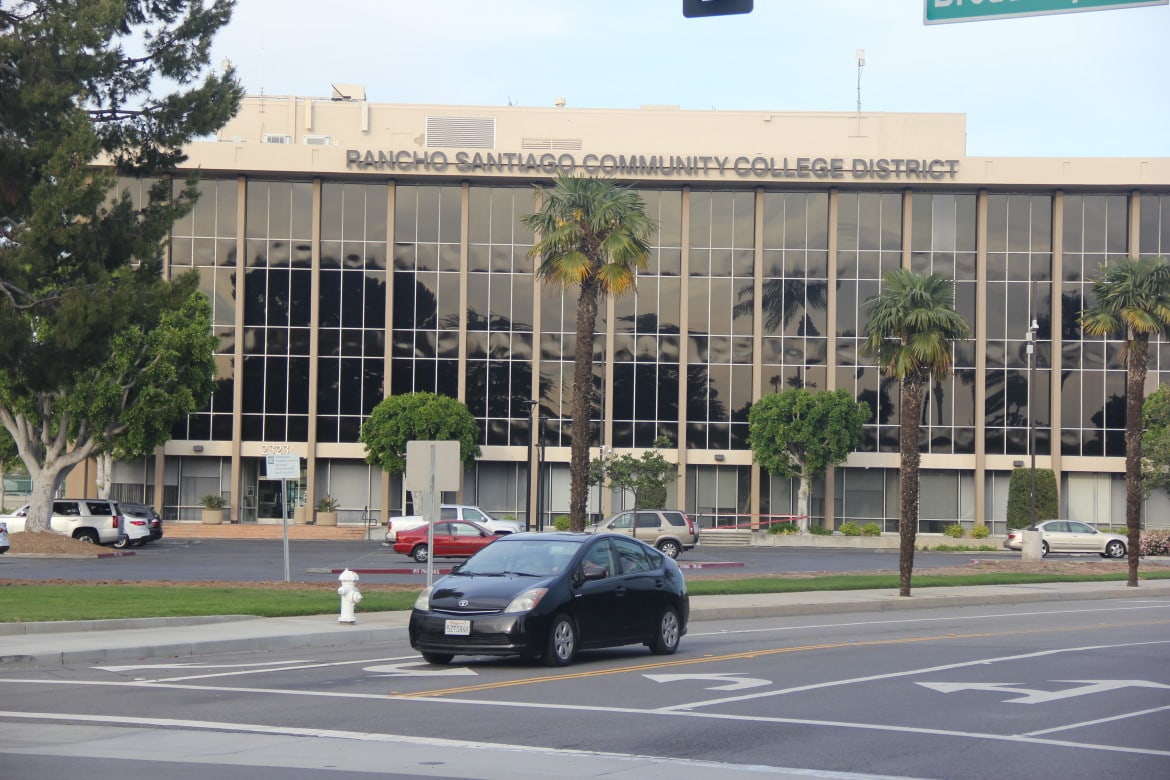 Board members at the Rancho Santiago Community College District are considering filling a vacancy on the board less than three months before the November election – and thus giving their choice the advantage of incumbency – a move that some of their colleagues say would interfere with the electoral process.

The controversy is the result of Jose Solorio’s recent resignation from the board, which oversees Santa Ana College and Santiago Canyon College, so he can run for Santa Ana City Council.

Because Solorio’s seat was already up for election in November, the board could either wait for voters to fill the slot in November, or appoint someone in the short-term who could use the benefit of incumbency to boost their chances of winning.

Last week, the board voted 4-2 to schedule an appointment on Aug. 15, with trustees Phillip Yarbrough and Arianna Barrios voting no.

Yarbrough was vocal in his opposition, saying the board would be giving an unfair advantage to someone who aligns with them.

“I’m just not interested in any appointment whatsoever,” Yarbrough said. “It interferes with the electoral process. Before I was elected to this board, there hadn’t been an elected trustee in something like 20 years. It was a constant revolving door.”

Yarbrough’s arguments drew support on the board, even from those who had argued in favor of the appointment.

“I do agree with Trustee Yarbrough, we do need to be fair to those that are interested in that position,” said board President Claudia Alvarez. “I am leaning towards just keeping the position open, given that it’s so short in time” before the election.

Others who voted to schedule the appointment say they’re not certain they’ll follow through, but that they want the option of filling a seat that would otherwise go empty for four months.

“I’m supporting this because I want to give us the option. It doesn’t necessarily mean I will vote to appoint someone,” said Trustee John Hanna.

If the board does move forward with the appointment, the new board member wouldn’t be able to say they’re the incumbent on the ballot in November. But they could still describe themselves as the incumbent in campaign mailers and other promotions.

“That person could still use that title, if you will, in literature they choose to put out there, assuming that they choose to run for office,” said Alvarez.

The district’s chief executive, Chancellor Raúl Rodríguez, argued that the board would not be interfering with the election if they moved forward with the appointment, because it would be after the Aug. 12 deadline for the appointee to say they’re an incumbent on the ballot.

“They would not be interfering with the democratic process if they did so as they are making no effort to appoint someone before the incumbent designation deadline,” Rodriguez said in an email to Voice of OC.

He acknowledged that they could still promote themselves as an incumbent through mailers and other communications, but said it “would be deceptive and/or unethical if they attempted to portray themselves as such.”

Barry Resnick, the president of the district’s faculty union, agreed with Yarbrough that an appointment would give an unfair advantage to the board’s chosen candidate.

“There’s no other reason to appoint somebody when you have an election 12 weeks away, other than for the appointee to use that as an advantage on his campaign material,” Resnick said.

And Sammy Rodriguez, a local resident with Concerned Orange Taxpayers, says such a move would thwart the voters’ will.

The trustees “serve their own self-interest and not the public’s interest,” said Rodriguez. “It becomes more difficult for a grassroots person to go up against [an incumbent] if they don’t have any money. It’s just a monopoly of the trustees.”

The debate comes after years of controversy at the district. Late last year, Voice of OC uncovered expensive travel by trustees on the taxpayers’ dime, including Solorio’s $400-per-night stay in a luxury hotel room in Las Vegas, and questionable spending by Yarbrough and Hanna. It was also revealed that Peter Hardash, the district’s chancellor for business operations, received thousands of dollars in gifts from district contractors he recommended for work.

These and other scandals have led Sammy Rodriguez and other local residents to search for other candidates to run for the board in November, in what they say is an effort to restore accountability and ethics to the district. Three of the seven board seats are up for election.

A majority of the board seats are up for election in November, including those of Solorio, Alvarez, Barrios, and Nelinda Yanez.

“We’ve reached the point where the only true change is going to come from running candidates and changing the trustees at the top,” said Rodriguez. “This community has finally said enough is enough, and now we’re gonna have to throw out the bums.”

Correction: A previous version of this story incorrectly stated the number of board seats up for election in November. The correct number is four of the seven seats.