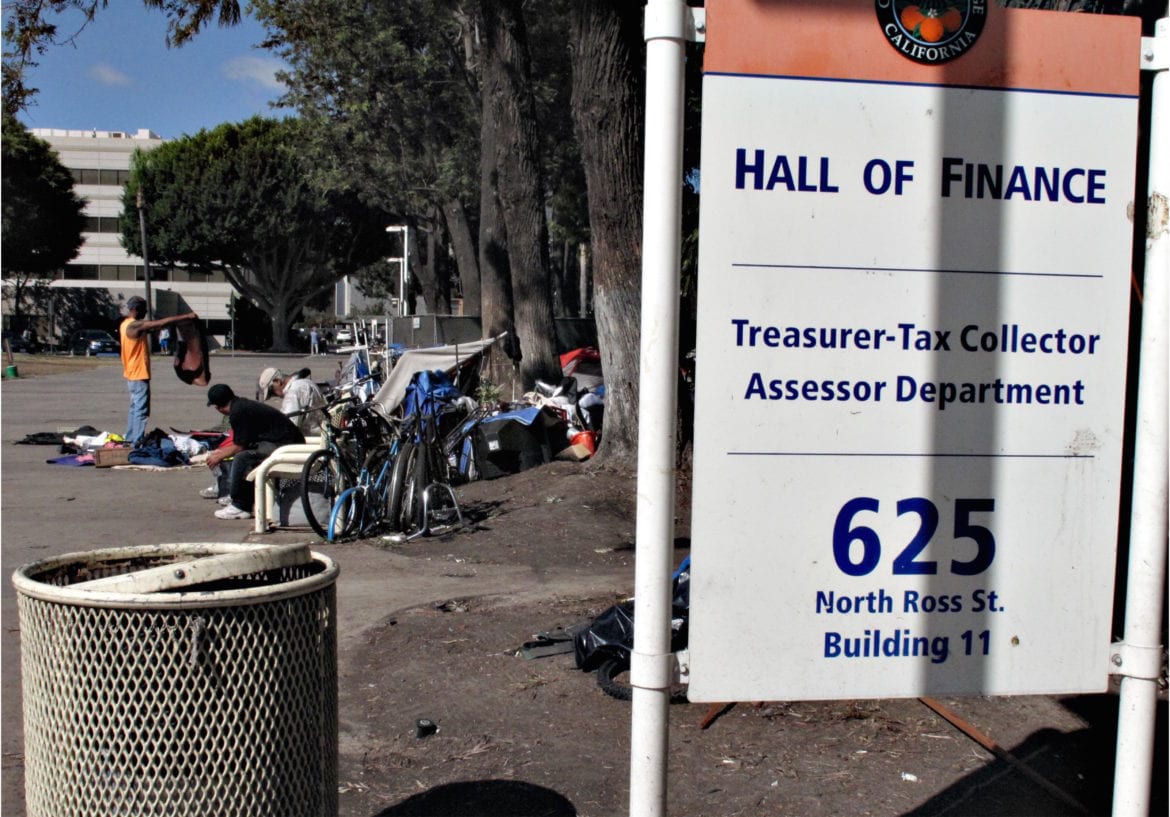 The homeless encampment at the Orange County Civic Center in downtown Santa Ana.

Orange County has both the money and the means to end homelessness –  all that’s missing is the political will.

That’s according to a coalition of homeless advocacy groups, who asked the county Board of Supervisors Tuesday to devote $55 million in taxpayer dollars annually – an amount that represents less than 8 percent of the county’s discretionary budget — toward permanent supportive housing and affordable housing efforts.

“The missing component is really funding. Federal and state sources are stagnant, or they grow slowly, and some are even shrinking,” said Eve Garrow, a policy analyst with the American Civil Liberties Union of Southern California (ACLU) who authored the report.

“The county will really have to fill that gap if we’re going to solve this problem.

In addition to the $55 million, activists are calling on the county to develop a housing trust and take on a stronger leadership role in combating the homeless crisis by pushing cities in the county to repeal laws that ticket the homeless for camping, sleeping and storing their belongings in public spaces.

The call for action from advocates follows the release of an ACLU report last week, “Nowhere to Live: The Homelessness Crisis in Orange County and How to End It.” The 42-page report argues that the county’s 10-year plan for ending homelessness is well-conceived but has been ineffective because of a lack of funding for housing.

“The county has not taken responsibility for funding and developing the permanent supportive housing that is needed to end chronic homelessness in what is one of the most expensive housing markets in the nation,” the report reads. “Instead, it relies on federal, state, and local funding mechanisms that do not come close to providing the needed resources.”

Supervisors Have Been Slow to Act 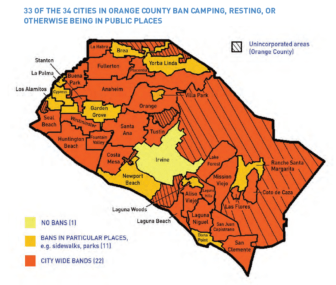 A graphic from the report highlights OC cities that currently have anti-camping ordinances and other laws targeted at homeless populations. Click to enlarge.

The county has only recently begun to address homelessness after years of complaints about the rising population of homeless individuals living at the Civic Center, along the Santa Ana River and in parks and streets around the county.

Last Thursday, the county officially opened the Courtyard Transitional Center — an ad-hoc homeless shelter at an abandoned bus terminal where the homeless can sleep, eat, store their belongings and access county services.

The board on Tuesday also voted to approve a number of agreements totaling more than $1.1 million in state grants toward rapid rehousing and emergency shelter services,

Homeless advocates have largely praised the supervisors for their efforts to get the bus terminal shelter up and running. But Garrow says the linchpin of any strategy to reduce homelessness is to provide housing – and that costs money, more than what state and federal funding currently provides.

“It would be a drop in the bucket in this county’s budget to end this now,” said Garrow.

A Hard Place to Find Housing 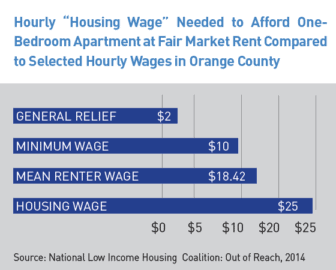 A chart from the ACLU report.

Many studies have shown that the most effective way to end chronic homelessness is to provide permanent and stable housing.

The chronically homeless are people who have experienced more than a year of homelessness or several bouts of homelessness, and often have disabilities, mental health conditions, and other circumstances that make them vulnerable to unstable housing.

The report cites studies that estimate the cost per day of permanent or affordable housing at $28, compared to $32 per day at a shelter, and $87 dollars in a jail.

While the county’s 10-year plan, adopted in 2007, makes rapid rehousing of the chronically homeless a priority, there’s not nearly enough supply to meet demand, the report said.

If the county finds the funding to follow through with an existing plan to create 280 new permanent supportive housing beds, they would only be able to house a quarter to a third of all the chronically homeless in the county, which is estimated to be 4,452 people on any given night, according to the county’s 2015 point-in-time count. By the end of 2017, the county would need to add another 460 beds, for a total of 740, to meeting existing need, the report states.

Existing federal and state funding is only enough to maintain the current stock of transitional and permanent supportive housing, with federal funds growing by an average of 5 percent a year, according to the report.

As a result, the county tends to push homeless people out of transitional housing beds and use those funds for permanent housing, or push out people who don’t fit the definition of chronic homelessness, according to the report.

The ACLU estimates that shifting the $2.3 million currently dedicated to transitional housing to pay for permanent supportive housing would only pay for 100 additional beds. 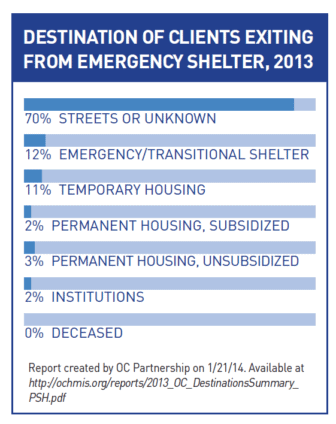 “Only 2 percent of the people in existing shelters currently exit to permanent supportive housing. A fifth cycle to other emergency temporary shelters. Seventy percent go back to the streets or another location,” Lehnkering said, citing the report.

The chronically homeless can wait years for a unit to become available, while those who don’t meet that definition – about 90 percent of the homeless population – are put on wait lists for affordable housing vouchers. Some wait lists are closed entirely, Garrow said.

Among the speakers Tuesday was Anna Mae Gonzalez, a 66-year-old woman with multiple disabilities who has been homeless for nine years. Gonzalez has appeared before the supervisors several times pleading for more action.

Gonzalez, who is known as “Mama Brizy” among Civic Center residents, said she applied for housing three years ago, but has yet to hear back. She is currently applying again for housing through the nonprofit Mercy House.

With a recent heart surgery and the death of some of her homeless friends over the past year, Gonzalez says she has fallen into a deep depression and can’t help but feel despair over whether help will arrive in time for many of her friends.

“I’m worried about [my friend], she gets so depressed,” Gonzalez said. It’s gotten really bad for me, I’m always worried who is going to die next.”

Now losing her memory and her eyesight, Gonzalez says what she misses the most about being indoors is the freedom to do things for herself.

“I miss all that, the cooking and the cleaning, even cleaning the bathroom,” Gonzalez said. “My family – the people on the street – they’re all invited to come when I have a home.”