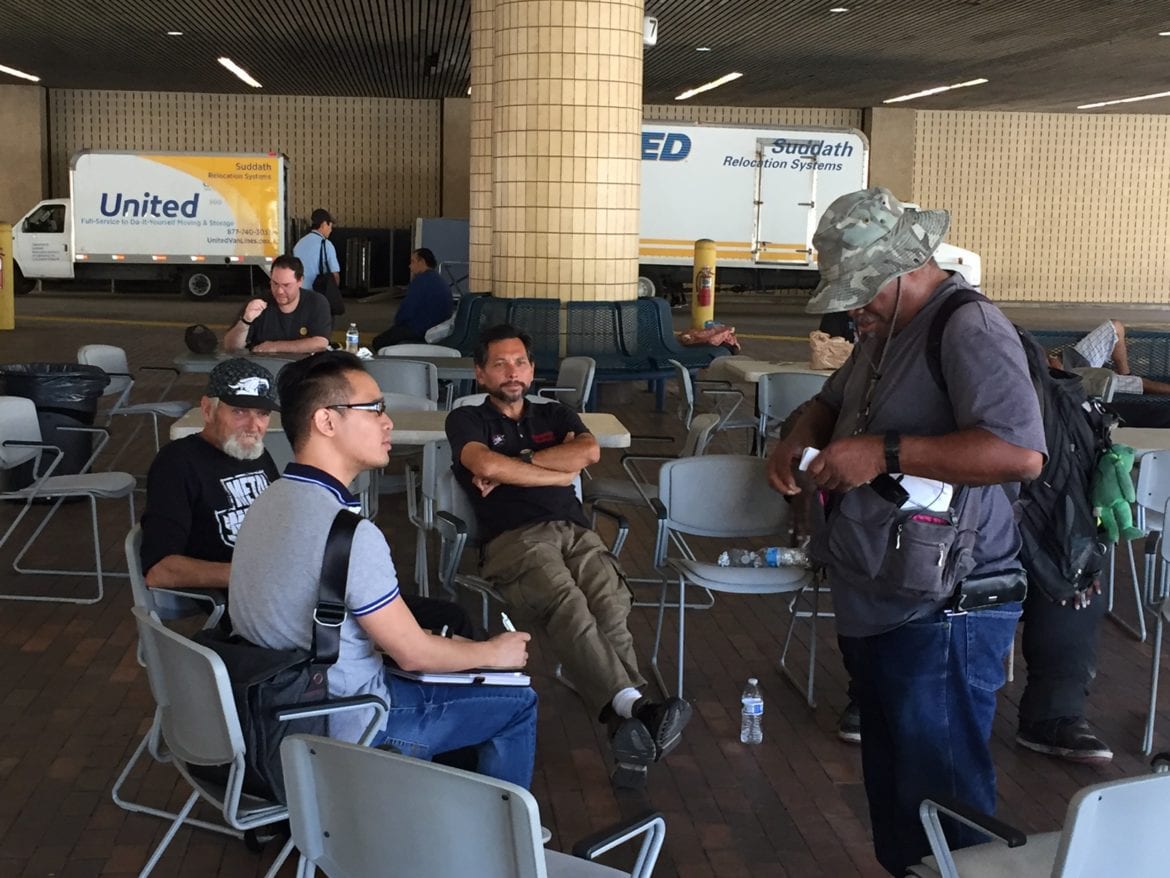 Homeless men talk with a county worker at the abandoned bus terminal in downtown Santa Ana, which has been repurposed as the Courtyard Transition Center for homeless people. (Photo by: David Washburn)

After nearly two years chronicling the cruelty of hundreds sleeping outside an empty bus terminal at Orange County’s downtown civic center, this week it is my sincere pleasure to report that the narrative has finally changed.

Walking into the terminal – now called the Courtyard Transition Center – last Thursday, I was impressed with a smooth operation and a really good vibe as lots of people came and went with little hassle.

Many people sat and chatted at numerous rows of nice tables with chairs. Volunteers were set up nicely in the corner offering warm meals to anyone who was hungry.

Across the other side, there were portable bathrooms set up and all the plumbing connections necessary for expanding restroom and shower facilities quickly, seem to be in progress. There was already a portable bathroom available for the disabled.

In the far opposite corner, a football field away, you could see the beginnings of a solid check-in storage center where people were already leaving their carts and other belongings while they were at the transition center.

There were also cubicle enclosures ready to be erected with officials estimating there may be more than 300 beds available there soon for those who seek help.

Meanwhile, anyone seeking supportive services from the County Health Care Agency and Social Services Agency can already connect with staff directly at the facility.

An impromptu and orderly bike parking lot had even sprung right next to the food line – with local residents organizing the effort on their own.

Now the plan is to have all nonprofit feedings for Civic Center homeless provided at the facility – ensuring better waste disposal and pest control on the Civic Center grounds.

Unlike the mess I encountered last December, when the facility was temporarily opened during cold weather and administered by Mercy House, last week’s scene was uplifting.

There is hope in the air.

It’s exactly what countless activists, nonprofit providers and myself publicly pondered as possible for so long.

Credit to the Midnight Mission for operating a space with dignity and respect, where there is security but it’s not provided in a manner that is over the top – such as the wanding that greeted any takers last December.

Credit also goes to Orange County Homeless Czar Susan Price for getting this implemented in a month, under as political a deadline as you will find.

Price also seems to be offering some much-needed leadership that can build trust in the homeless community by ensuring that everything ran smoothly at the terminal, visibly on scene and connecting the dots – ensuring a respectful, grassroots approach that will be needed in order to convince homeless people to use the facility.

Finally, lets also give credit to members of our Orange County Board of Supervisors, who bought the $3.2 million facility back in June and recently authorized a $1.4 million for the effort at the bus terminal.

It proves that with political leadership comes action and results.

Now, this week we get to start on the real challenge when it comes to solving homelessness.

The stark truth is that facilities like the bus terminal – and there should be one in each supervisorial district – must be backed up by a strong and vibrant housing component.

“Housing first,” is the term most activists and respected experts like Paul Leon at the Ilumination Foundation use to describe the real solution to homelessness.

Our friends at the ACLU have already done us a great favor, working up their own report that puts the bill at $50 million to accomplish the goal.

This week, Eve Garrow who wrote about her report in our opinion section last week, and others will head to the Board of Supervisors on Tuesday to officially start that conversation.

They want supervisors to start funding the “Plan to End Homelessness” they agreed to a decade ago in concept but walked away from.

We have the money and means in Orange County to do this.

In fact, we are spending tons more – through police and emergency rooms – to be really mean to our fellow human beings who have fallen on hard times.

It’s much cheaper and more rewarding to just do the right thing.

Do the Right Thing

In “Management Diseases and Disorders” – Danley and Hughes delve into the worst public sector management diseases and address how to best treat them in a medical encyclopedia approach to local government administration.

While the pair insists that the case studies listed in their book are a compendium of examples encountered throughout their careers, it’s hard not to see eerie parallels to scandals like the Bustamante trial and the increasing politicization of the county’s civilian executive ranks over the years.

“Too much politicization of stuff since the bankruptcy,” said Danley when pressed in an interview about his principal critique of Orange County government, “where individual elected officials are more concerned with their interests than the public’s interest.”

Danley retired in protest as HR director last year. Hughes left his own job shortly after, taking is job in LA County after being appointed OC performance auditor by county supervisors.

The pair apparently spent the last year working on the book, which was released this last week.

Hughes resisted any direct critique, but noted that the type of county supervisor in Orange County has changed a lot since the 1990s.

Former supervisors, like Chuck Smith and Tom Wilson, were often executives who came out of the private sector — in their case the aerospace industry, he said.

“They viewed county operations very much like the various units/divisions at Rockwell, Norhthrop,” Hughes said.

“For them, they wanted competence.”

Hughes added: “When you have electeds who don’t have that kind of experience, they are at a disadvantage…almost through no fault of their own, they are not appreciative of the advantages of management and the consequences when they are not rewarding merit and subject matter expertise.”

Hughes – who was the county internal auditor who exposed the Bustamante scandal in an audit report — did note that Supervisor Shawn Nelson, then Chairman of the Board, “was very receptive, promoted it (management principles).”

“They admitted a learning curve,” he said and listened when tough audits presented tough situations and remedies.

Hughes didn’t say a word about any other county supervisor.