But it is nonetheless key to the city’s long-term economic survival as leaders are betting on the development of new tourist destinations along Harbor Boulevard, such as the Great Wolf Lodge Waterpark Hotel, to revive a depleted tax base.

And with the advent of district elections in Garden Grove, two first-time city council candidates are vying to be the voice of this neighborhood as it undergoes what could be a dramatic transformation in the coming years.

Stephanie Klopfenstein, a Parks and Recreation commissioner and board member of the Garden Grove Neighborhood Association, faces Demian Garcia-Monroy, a U.S. Army veteran and home health nurse who co-founded the Garden Grove branch of the League of United Latin American Citizens.

Both candidates say they’d like to see big developers play a more active role in the community and give back to District 5 residents who bear the brunt of traffic and noise impacts of the new developments.

But their prescriptions for improving the city differ in significant ways. 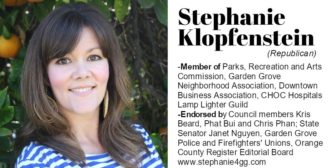 Klopfenstein, a marketing professional and former radio producer, is a fourth-generation Garden Grove resident who says public safety is her top priority, citing an Orange County Register story that found a 40-percent increase in crime in Garden Grove.

She acknowledges that, as a white, monolingual person, one of her biggest challenges is communicating with a district that is 49 percent Latino and nearly 30 percent Asian. She hopes race or language won’t keep residents from seeing her as a resource.

“I hate to chop things up by race – we’re families and we’re working hard and want to give a good upbringing to our children,” Klopfenstein said. “And I think a lot of people can relate to that no matter what race they are.”

Klopfenstein has aligned herself with members of the current city council who believe that new revenue from hotels along Harbor will put the city on the map, help reduce the budget deficit, and pay for hiring more police officers.

“The hotels are exciting – we’re becoming a destination,” said Klopfenstein.

Despite the focus on big developments, she also wants to preserve some  of the city’s small town-feel. Klopfenstein said the city should try to attract developments that are focused on creating a new sense of community, pointing to plans for a mixed-use development near City Hall that would use the original structure of existing single-family homes to create an urban village of commercial, office and residential spaces.

Klopfenstein said the city needs to do a better job of planning how new developments would affect nearby residents. The Waterpark is sandwiched between quiet neighborhoods of single-family homes and small strip malls. 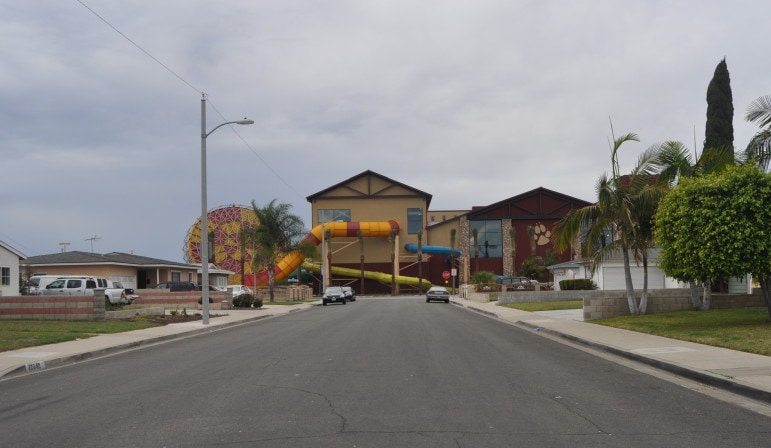 A view of the Waterpark Hotel from the quiet residential neighborhood directly across the street. Some residents have complained about the aesthetics of park’s large yellow slide and protruding tubes.

“Almost everywhere I walk, you can see a hotel. There are streets that back up to the hotels – they’re right there,” said Klopfenstein. “You have a lot of things between suburban sprawl and development. How those things work together is going to be extremely important.”

She said placing more attention to code enforcement – as well as advertising the city’s constant responses to complaints – would help residents understand the city’s limited resources and encourage more residents to be proactive about the appearance of their own neighborhood.

Garcia-Monroy is looking for the city to direct more resources to its young residents.

He said he brings a cultural perspective of the disadvantaged Latino youth that has never been represented on the City Council. His family migrated to Garden Grove from Mexico when he was 8-years-old, and he grew up attending local public schools. He met his wife, who is Vietnamese, while attending Santiago High School. 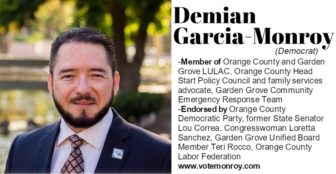 Garcia-Monroy wants to fight the mindset that only parents, not the city, should have a stake in finding mentorship and educational opportunities for their children.

“There’s a lot of truth to that, but it’s not a culturally competent answer,” he said. “A lot of our immigrant families are low income, they’re working multiple jobs, and they might have great values and morals but they don’t have the ability to supervise their kids as much as they’d like.”

Garcia-Monroy says his focus is primarily on improving programs and involvement as means of lowering crime and creating more pathways to success for the district’s many disadvantaged youth.

He envisions a more “nonprofit-friendly” city and a neighborhood fabric built through union apprenticeships and other mentoring programs.

“The best ways to fight crime, in my opinion, is having youth that have good mental health, good education opportunities and good employment opportunities,” Garcia-Monroy said.

Garcia-Monroy said some of these community projects could be achieved through corporate sponsorships or community partnerships. He suggests the city approach a big corporation like Ford or Coca Cola to sponsor a new park, and businesses like Home Depot to donate supplies for graffiti removal.

He supports continued development along Harbor but criticized previous deals – such as the purchase of a mobile home park by the city’s former redevelopment agency to give to the Great Wolf Resort developer – as failing to respect residents.

“When we bring in developers, we can’t just say yes. We have to talk about what are the type of things they’re willing to work with our community on,” Garcia-Monroy said.