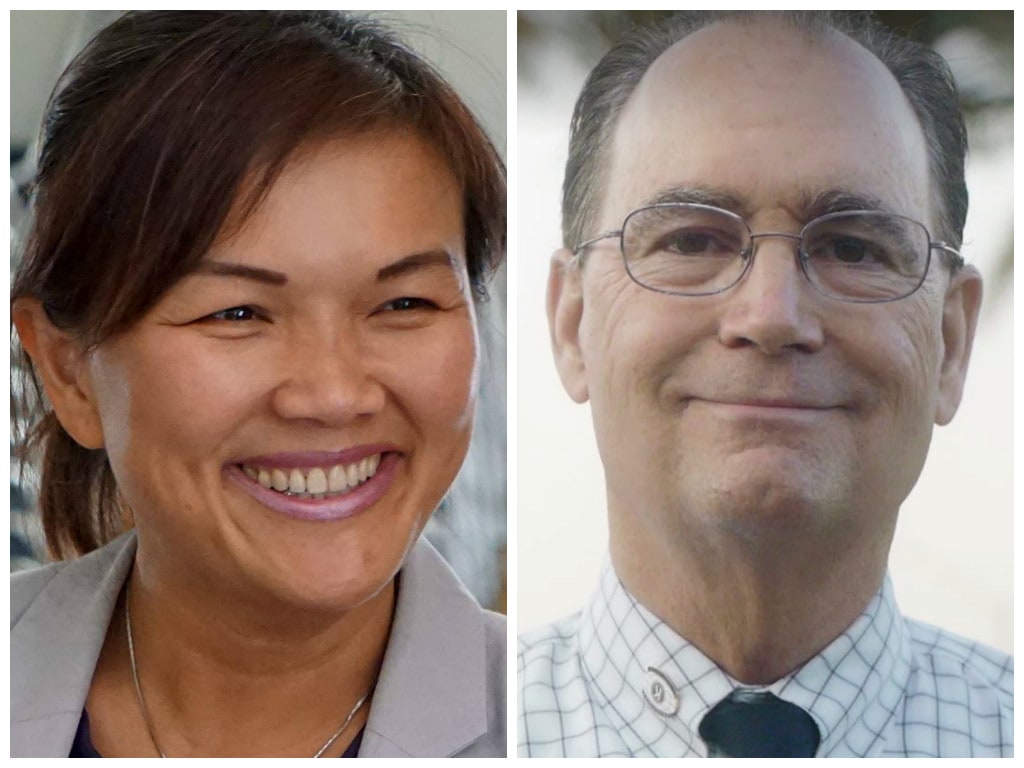 (Editor’s note: This year’s election is a pivotal one in Orange County as city council members in Anaheim and Garden Grove will, for the first time, be elected on a district-by-district basis. With that in mind, we will be publishing profiles of each council race in those cities, plus Santa Ana.)

In Garden Grove, two first-time candidates are vying for the newly constituted District 3 seat in next month’s election: Clay Bock, the owner of a custom jewelry business who wants to cleanse the city of pot shops; and Thu-Ha “Diedre” Nguyen, a research scientist who says the city needs to improve its outreach to residents.

District 3 lies in the south-central part of Garden Grove, home to the rusty steel skeleton of the Garden Grove Galleria project, portions of Little Saigon and the Korean Business District. Among residents eligible to vote, 60 percent are Asian, 23 percent are white and 13 percent are Latino, according to 2014 figures.

The stakes are slightly lower this election for District 3 in that whoever is elected will only serve two years, a shortened term to get all the districts on the same schedule. After 2018, council members for all the districts will serve four-year terms.

In many respects, the District 3 race embodies the central controversy surrounding the move to district-based-elections in Garden Grove, as Nguyen supported the district map that was ultimately approved despite objections from others who said it split up a core Garden Grove neighborhood. Many of those who opposed the current district boundaries are throwing their support behind Bock.

The institutional money is behind Nguyen, a Democrat who has brought in $18,548 in donations from, among others, police and fire unions and Councilman Phat Bui. Bock’s campaign, meanwhile, is surviving on small donations, including $50 from Councilman Chris Phan, and a $1,000 from Bock himself.

Bock, a Republican who ran unsuccessfully for school board two decades ago, says his priorities include eliminating medical marijuana dispensaries within city boundaries, improving public safety and tackling public works projects to improve the city’s aesthetics.

His decision to run was based primarily on Mayor Bao Nguyen’s proposal to put a measure on the November ballot to tax medical marijuana sales as a source of revenue, which he is steadfastly against. Bock said the proliferation of dispensaries has become a public nuisance and draws crime to the city.

“I’m not saying it’s that much worse than alcohol,” Bock said. “But I think it’s worse for society if it’s readily available.”

Although the city currently bans pot shops, that ban has not been enforced, allowing at least 25 pot shops to continue operating within city boundaries, sometimes drawing armed robberies and generating complaints from nearby businesses.

Bock is among several council candidates who have cited an Orange County Register article that reported a 40 percent increase in crime in Garden Grove between 2014 and 2015.

In addition to arguing for hiring more police officers (a proposal that nearly every city council candidate has floated), Bock has challenged all council members to establish neighborhood watches in their districts to encourage residents to be pro-active about their community’s safety.

“It’s something that citizens could do immediately. To hire enough police officers, we need twenty, you can’t do that all at once,” said Bock.

Bock’s association with the church of Scientology — he is chair of the local chapter of the Citizens Commission on Human Rights, which denounces modern psychiatry – has been a source of controversy, fueled by comments against Bock at a city council meeting by a former Scientologist, and recent critical coverage in the OC Weekly.

Bock has characterized the criticism as coming from special interests outside of Garden Grove and said his religion “doesn’t come into play in my city council race.”

Nguyen, who up until this year was not active in local politics, said she decided to enter the race out of frustration with city leaders’ lackluster outreach efforts to the public, especially in the weeks leading up to a city council vote on the district map.

“How many people actually pay attention to the [city] website? The elderly [Vietnamese] depend heavily on media like newspapers and radio…different groups have different needs,” Nguyen said.

While knocking on doors to meet voters, both Bock and Nguyen say many residents were not aware of the transition to by-district elections. That lack of awareness is part of why few Latino and Vietnamese residents participate in civic life, Nguyen said.

“If I don’t know about it, I can’t participate in it…you have to say, ‘this is what really affects our life daily,’” said Nguyen.

Nguyen also pointed to public safety as a top priority, saying the city needs to hire police officers over the next several years.  “You also have to look at after school programs. We can work with the school district…to see what the city can provide,” Nguyen added.

Both candidates also support the city’s approach to economic development, which has been heavily focused on hotel projects along Harbor Boulevard and large-scale, mixed-use developments such as the Brookhurst Triangle, which is located in District 3.

Bock said he is open to tax subsidies for development projects and that the Harbor corridor is “vital and could be the key to handling the city’s financial problems” without raising taxes. He pointed to cities like Stanton and Westminster, and their bleak fiscal pictures, as cautionary tales of the perils of not having a tourism infrastructure.

Nguyen said in addition to supporting big projects along Harbor, the city should focus on infrastructure to help retain businesses and make the city more appealing to visitors.

“If you are a tourist and drive across town, you see old building, graffiti…and investors too,” Nguyen said. “So we have to improve the look of certain areas.”

Nguyen has drawn some criticism for holding campaign events in Westminster, including a fundraiser at the Paracel Seafood restaurant, a popular venue for political fundraisers, prompting some to suggest that she has more ties to Westminster than Garden Grove.

Nguyen said she has been involved in fundraising efforts and youth groups in the broader Vietnamese community, which is spread out across Orange County but not in any one individual city.

“The Vietnamese community is in Garden Grove, Westminster, Fountain Valley and Santa Ana…a lot of events are usually hosted at the Memorial Park, and it happens to be in Westminster,” said Nguyen. “The bottom line is I’m a resident of Garden Grove.”