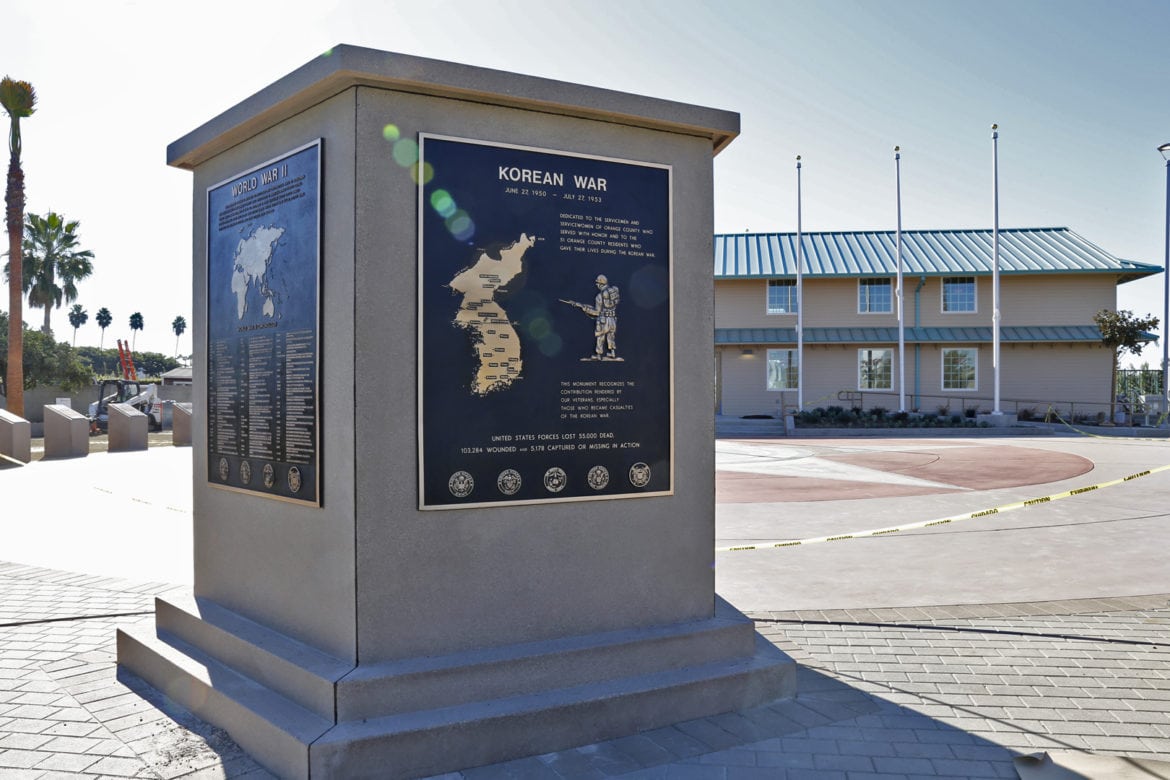 After decades of rebuffs by political leaders, Orange County’s military veterans will celebrate the opening of their own museum on Veterans Day.

“It’s not like any other museum,” said Kathy Kramer, chief executive officer of the Orange County Fairgrounds and Event Center (OCFEC), home to Heroes Hall. “It’s through the eyes of the sacrificers.”

She means that the two-story museum will tell history through the personal experiences of veterans. Museum officials are also working with area school districts to make local war history a bigger part of school curriculums.

For decades, Orange County was home to both the massive El Toro Marine Corps Air Station and the Santa Ana Army Air Base in what is now Costa Mesa.

Interest among veterans is so high that museum staff have been told one World War II Army veteran, who trained at the base, is so determined to be at Friday’s ceremonies, he will be driven to the fairgrounds in a medical transport vehicle.

Orange County has more veterans than seven individual states and the third largest concentration in California, behind Los Angeles and San Diego Counties. Overall, California has about 1.9 million veterans.

But despite its size, the county is largely bereft of veterans services.

Local veterans must travel to Veterans Administration hospitals in Los Angeles or San Diego for anything but the most basic medical care.

And when the El Toro Marine base closed and veterans’ supporters urged that part of it be turned into a military cemetery, local politicians initially balked. They instead sided with Irvine developer FivePoint Communities, which wanted to build houses adjacent to the site and was worried that a cemetery would depress sales to Asian buyers who believe that living next to a cemetery is bad feng shui.

Ultimately, then-Assemblywoman Sharon Quirk-Silva (D-Fullerton) got state legislation passed authorizing the cemetery in Irvine and it now is on the U.S. Department of Veteran Affairs list of approved cemeteries, although there is no funding for it yet. So, for the time being, the closest cemetery for Orange County veterans remains in Riverside County.

Another bone of contention was the treatment of the plaques commemorating combat heroism by local veterans that were placed along the Walk of Honor at the county Civic Center in downtown Santa Ana. As the Civic Center’s homeless population exploded over the past decade, the plaques were not regularly cleaned and were often urinated on. 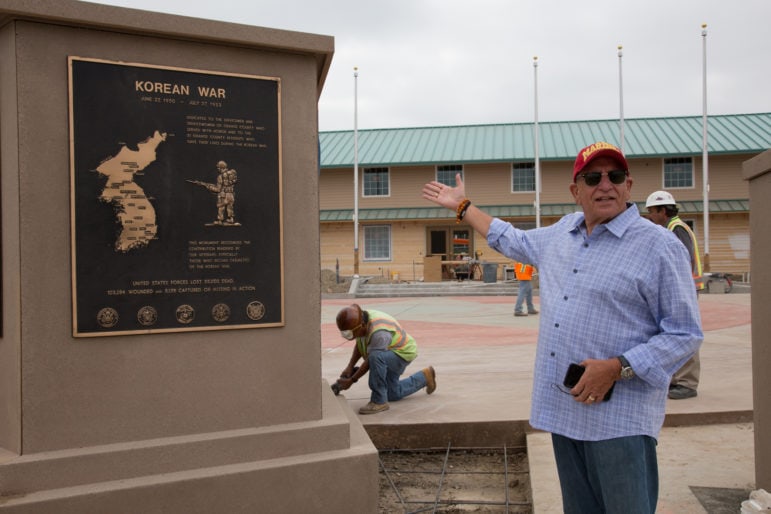 Nick Berardino, the driving force behind Heroes Hall, visits the site during construction.

Many were enraged by this, but no one more so than Nick Berardino, a Vietnam Marine Corps combat veteran who was also the general manager of the Orange County Employees Association (OCEA). Under Berardino’s leadership, OCEA had increasingly supported veterans causes and he became the driving force behind the effort to build a veterans’ museum, which would also serve as a new home for the plaques.

Berardino, who is also a member of the county fair board, retired from OCEA last year and put all of his considerable energy behind getting the museum funded and up and running by this Veterans Day.

“Veterans have been trying for three decades to get a museum,” he said in a telephone interview. “The difficulty has been competing for land with development interests. It was critical to honor our veterans.

“I was able to get the fair board to do it and the governor (Jerry Brown) supported this effort,” he said.

The two-story museum will be open year round and twice a year will focus on a new phase of the history that runs from World War I through World War II, the Korean War, the Vietnam War, Desert Storm and the Iraq-Afghanistan War.

Kramer said a teaching space is being set up inside the museum where the roughly 100,000 school kids that tour the fairgrounds each year can learn about Orange County’s veterans and military history.

“The kids are going to learn about their heritage,” said Berardino. He said education is a “critical” part of the museum so that students learn what the young men and women who came before them did for their country.

The plaques from the Civic Center are now posted in front of Heroes Hall. They honor each of the county’s Congressional Medal of Honor recipients, plus others who performed acts of valor. 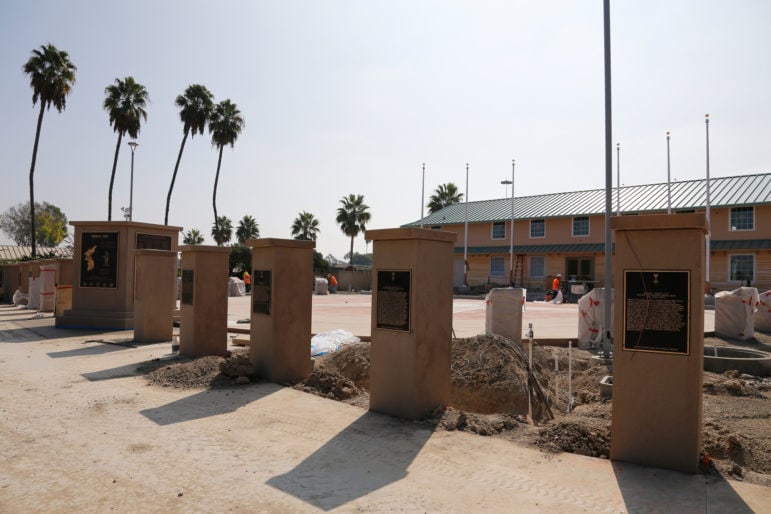 Plaques that were once situated along the Walk of Honor in the Orange County Civic Center have been relocated to the courtyard of Heroes Hall.

Stands holding the plaques border a 50-foot-circle of pavement in the design of the Congressional Medal of Honor, the nation’s highest military decoration. It is awarded by Congress and presented by the President for bravery in combat above and beyond the call of duty.

And then there are lists of those who died, including the 327 young men from Orange County killed during the Vietnam War. The initial first floor exhibit will tell the stories of the county’s Vietnam War veterans, using their words and personal items as well as photos, film and other media.

A new plaque is being put together now for local men and women killed in Middle East fighting since 1990.

“We’re coming to grips with how many names we’re going to have to put on that one,” said Berardino. “I makes you want to throw up. The sad thing is, we have to order a plaque with room for more names.”

Heroes Hall itself is a remodeled two-story World War II barracks from the days when the current fairgrounds was part of the 1,300-acre Santa Ana Army Air Base training facility.

Backers of the veterans museum had to fight hard to save the barracks from officials who said it was too old and shaky to survive moving to the 150-acre Heroes Hall site. 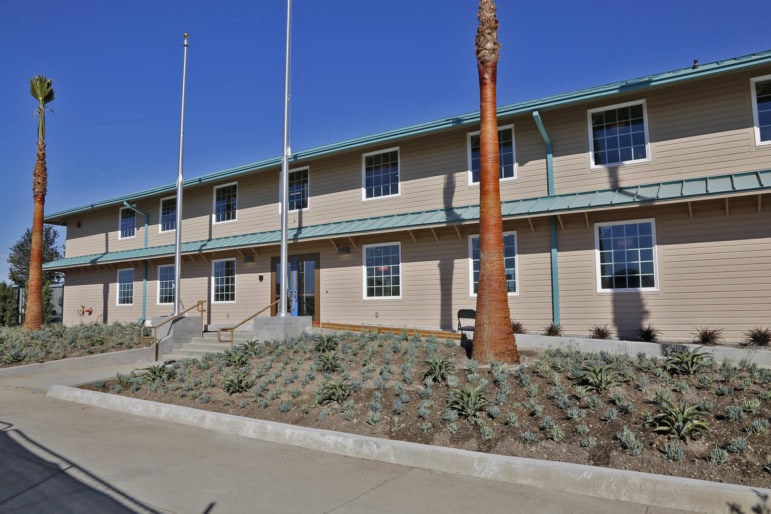 The Heroes Hall building is a remodeled two-story World War II barracks from the days when the current fairgrounds was part of the 1,300-acre Santa Ana Army Air Base training facility.

But the 50,000-pound, 5,000-square-foot, two-story building made the half mile trip just fine. Now, the barracks — which once housed military personnel including: Joe DiMaggio; Gene Autry; Catch-22 author Joseph Heller; and Don the Beachcomber — has been restored and its story, and those of men stationed there, will be told as part of the Santa Ana Army Base history.

For all veterans, outside a garden is planned, a quiet area where veterans are welcome to come and just sit “and bring peace to their lives,” Kramer said.