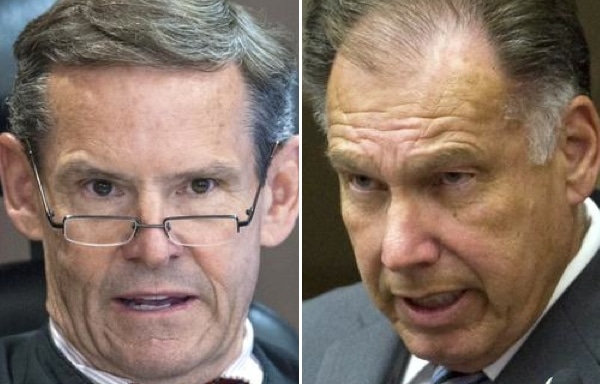 Superior Court Judge Thomas M. Goethals ruled Friday that two former deputy district attorneys — who were just this month sworn in as judges themselves — engaged in “serious misconduct” during the prosecution of a murder case, and would be barred from retrying the case if they were still with the DA’s office.

Cole Wilkins, a 40-year-old from Long Beach is facing a second murder trial because a Los Angeles County sheriff’s deputy was killed early on a July morning in 2006 after crashing his car into a truck on the 91 freeway in Anaheim while swerving to avoid a stolen stove that fell off Wilkins’ pickup.

In their original report, California Highway Patrol officers ruled the death of 34-year-old deputy David Piquette an accident because other motorists ahead of Piquette had been able to avoid the stove. But a superior officer ordered that report changed to say it was Wilkins’ fault and prosecutors filed murder charges against him because the death occurred during the commission of a felony.

“These two (former) prosecutors bear ultimate responsibility” for the failure to tell Wilkins lawyers 11 years ago that the California Highway Patrol destroyed original accident reports and ordered them rewritten, Goethals wrote in his opinion handed down during Friday’s court session.

Goethals acknowledged his ruling was “largely symbolic” because the former deputy district attorneys, Larry Yellin and Michael Murray aren’t with District Attorney Tony Rackauckas’ office anymore. They were elected as Superior Court judges last year and and both denied knowing about the destroyed reports.

But Goethals’ opinion cited a series of U.S. Supreme Court and other legal decisions that hold prosecutors responsible for knowing all of the evidence in a case and notifying the defense of anything that would help its case.

“This recusal order results from the compelling evidence presented to this court related to serious misconduct engaged in by prosecution team members,” Goethals wrote. “If the justice system is to maintain its integrity judicial transparency must be an essential part of the process.”

The Wilkins case is the latest example of the DA’s office allegedly violating the constitutional rights of defendants by hiding information from their lawyers. The office is currently being investigated by both the state Attorney General’s office  and the U.S. Department of Justice’s civil rights division in the wake of the so-called jailhouse snitch scandal.

In 2015, Goethals barred the DA’s office from handling the death penalty phase of the case against Dekraai, who admitted to the 2011 slaughter of his ex-wife and seven others at a Seal Beach beauty salon.

So far at least six defendants have had their convictions for murder or other major crimes overturned for rights violations by the use of informants.

The Wilkins case, however,  differed from others because it involved accident reports destroyed by the CHP, not direct misconduct by prosecutors.

In 2008, DA prosecutors won a first degree murder conviction of Wilkins and a sentence of 26 years to life in prison without his defense attorneys knowing about the original CHP reports. But the state Supreme Court unanimously overturned the conviction in 2013, saying Wilkins had put enough distance between himself and the Riverside County robbery site to reach “a place of safety” unconnected to his crime.

Following the Supreme Court ruling, the DA’s office decided to retry the case.

During a month-long hearing late last year, deputy public defender Sara Ross argued no one within the DA’s office could be trusted to handle Wilkins’ retrial because of the office’s history of failing to disclose information to the defense.

“OCDA’s conduct in this case demonstrates that no prosecutor from OCDA can be reasonably relied upon to provide exculpatory evidence to the defense, including evidence that is inconsistent with the testimony of current and former prosecutors who testified in this litigation,” Ross said in written arguments to Goethals.

But both Yellin and Murray denied knowing the CHP destroyed the records, and, in any case, deputy district attorney Howard Gundy told Goethals they said “the reports would have been irrelevant and of no importance to the case, one way or the other.”

However Goethals said in his ruling the destroyed reports were “exculpatory”—information that could have helped Wilkins’ defense.

Yet Goethals ruled there was “insufficient” evidence developed during the hearing to remove the entire DA’s office from the case, as he did in the Dekraai case.

Ross said in her written arguments that 24 years ago, when Rackauckas was a juvenile court judge, he sentenced a 15-year-old Wilkins to nearly 40 years in the California Youth Authority when he was found guilty of rape. Wilkins was released when he was 25.

Before filing the murder charges against Wilkins in the 2006 case, Ross said in her written arguments, Yellin met with DA Rackauckas who told him to “figure out” if the case could be filed as murder.

But Deputy Attorney General Ryan Peeck said during the court hearing that Rackauckas was telling the deputy DA “to resolve one way or the other” whether the charges against Wilkins should be murder or a lesser offense. “I don’t see anything wrong with that” if it was done properly, said Peeck.

But, he cited legal precedents that determined “recusal of an entire district attorney’s office is an extreme step” and Goethals added an elected district attorney has a right to decide how cases are handled. “He has been elected to make such decisions” and it’s ultimately up to the voters to decide if he is handling his responsibilities well.