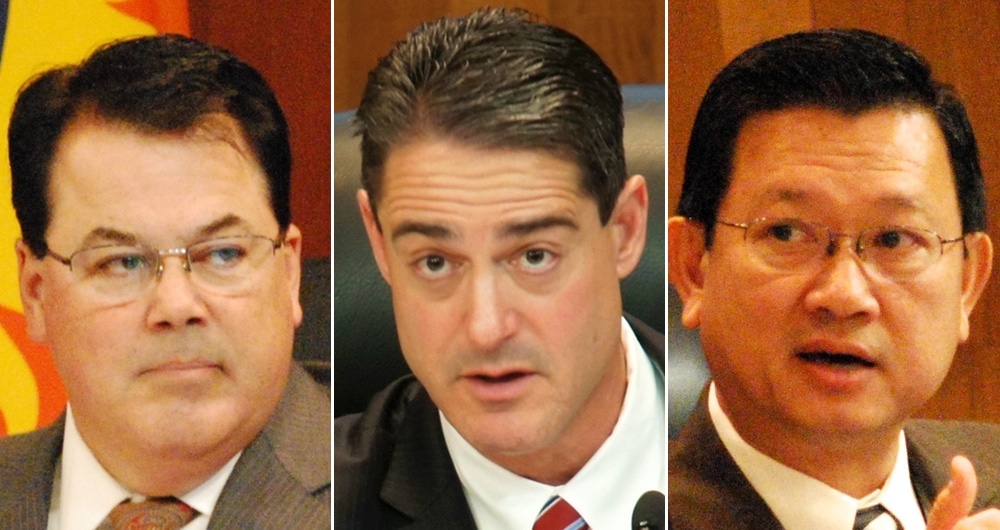 The county supervisors who voted to have contracts return to them more often. From left: Shawn Nelson, Todd Spitzer, and Andrew Do. (Photos by Nick Gerda and Katlin Washburn)

The Orange County Board of Supervisors will soon have more power and oversight over county contractors, who will get shorter terms for their agreements and must return to supervisors more often for extensions.

The new rules, which supervisors passed this week and take effect in July, cut the time most contracts can run from the current five-year maximum to three years. At that point, contractors will have to return to the supervisors each year for approval of extensions.

The change effectively increases the number of times contractors need supervisors’ approval for five years of county work, from a single approval to three approvals.

The new time limits will affect many of the county’s large contracts, given that the agreements now often run between four and five years, according to county staff. It also could give businesses that want to replace existing contractors more opportunities to bid and seek support from supervisors.

A county committee – comprised of supervisors Lisa Bartlett and Michelle Steel, and county staff – was convened last year to recommend updates to the contracting policies.

Their final recommendation was to extend the current contract time limits, by allowing five years plus an additional one-year extension without supervisors’ approval, if the annual cost doesn’t increase.

But when that proposal came to a vote Tuesday, the Board of Supervisors went in the opposite direction.

During the discussion, Supervisor Andrew Do proposed limiting contracts to a maximum of three years, plus two one-year extensions at supervisors’ discretion.

It passed on a 3-2 vote, with Bartlett and Steel in opposition.

The changes affect county contracts for services, commodities, and equipment, which are covered by the County Procurement Manual.

Public works contracts for architects, engineering, and construction are governed by a different set of policies, known as the Design and Construction Policy Manual. Supervisors said they planned to also shorten the maximum contract time limits for those contracts at a future meeting.

Do said the changes approved Tuesday would help boost the board’s “supervision and oversight” over contracts.

As an example, he pointed to a Sheriff’s Department contract from earlier in the meeting, in which the department apparently ignored a board directive from two years earlier to look into lowering the high fees that families must pay to send money for jail inmates to buy items from the jail’s commissary. The supervisors voted Tuesday to let that contract expire this weekend without a replacement.

And for months, Supervisor Todd Spitzer has advocated having contracts return more often to the board, saying Tuesday that supervisors “have a responsibility to know what’s happening, and to oversee it.”

But Bartlett said the change would cost taxpayers millions of dollars.

The county gets a “quantity discount” by having five-year contracts, which adds up to millions of dollars in savings across all of the county’s contracts, Bartlett said.

And every time a contract has to be brought back to the board it costs “tens of thousands of dollars” in staff time, she said.

County government contracting is a huge business, with more than $3 billion spent each year by Orange County on over 3,000 separate contracts.

Supervisors get to make the final decision on who gets large contracts, which also provides a lucrative opportunity to fundraise for their re-elections and campaigns for higher office.

A significant portion of the supervisors’ campaign contributions come from county contractors, much of it given in close proximity to when supervisors are deciding whether to approve their contracts.

In one example, Spitzer and Supervisor Shawn Nelson harshly criticized the company that provides phone service for inmates, saying it was overcharging local families who wanted to talk to loved ones in county jails.

But after getting maximum campaign contributions from the vendor, Global Tel-Link Corporation, they both quietly voted to renew the contract with the same company at the same prices. Spitzer, who got the contribution just days after raising his concerns, later denied that his vote had anything to do with it.

Global Tel-Link also owns the jail commissary vendor Do cited Tuesday in arguing why contracts should come more often before the board.

During the discussion, Bartlett rebutted Do and Spitzer’s arguments that the more frequent approvals would provide better oversight.

She said supervisors will already be getting extra oversight from a new policy in which staff will set “performance metrics” on how contractors are doing and provide those to the board.

Do responded that such metrics sound nice in theory, but that he finds that “there is value” in contracts coming back to supervisors to get examined.

Spitzer also disputed Bartlett’s concern about extra taxpayer costs, saying “we’re gonna get the competitive prices because people want to do business” with somebody who pays their bills and buys large amounts.

And he disputed Bartlett’s argument about extra costs for staff time, saying “it is a fixed cost” for staff to prepare contract documents.

Bartlett argued back, saying if Public Works has a bunch of contracts now changing from five to three years, staff may be getting the same salary, but will have to push off other tasks that they wouldn’t be able to get to.

“There’s only so much time” in the day, Bartlett said.

And she reiterated that five-year contracts will provide more competitive pricing.

On Tuesday, supervisors also unanimously voted to direct staff to send them a list of contracts that are about to expire or are up for amendments several months ahead of time.

Do proposed the change, saying it would allow board members or the CEO’s office to bring a contract up for discussion at a board meeting if they have any questions.

The new three-year limits are slated to start July 15, when the new manual takes effect, and apply to new contracts from that point forward.

Correction: A previous version of this article incorrectly stated that Bartlett was the only supervisor to oppose shortening the contract periods. She was joined by Steel in voting against the proposal.