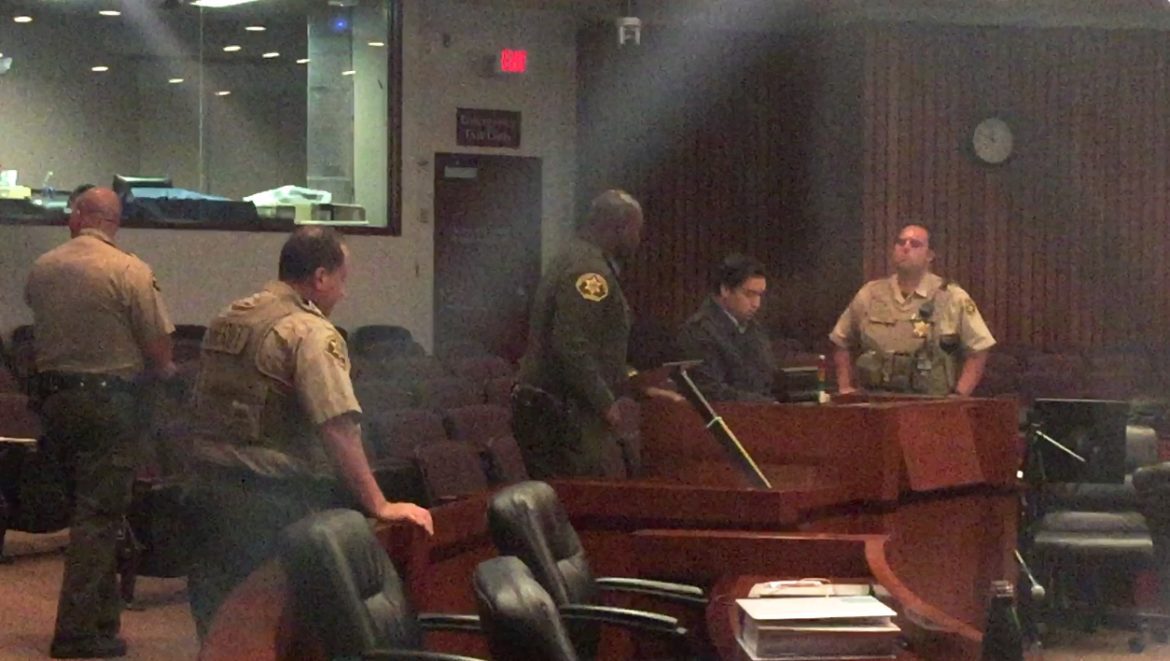 Homeless activist Mohammed Aly is surrounded by a sheriff's deputy and security officers after he refused to leave the speaker podium at Tuesday's meeting. (Photo by Nick Gerda/Voice of OC)

Homeless advocate Mohammed Aly shut down the Orange County Board of Supervisors’ public meeting for half an hour Tuesday to draw attention to what he says is their failure to help homeless children living along the Santa Ana River.

During public comments, Aly criticized each supervisor by name for “failing families” and “failing children” by not working harder to find housing for homeless families with children.

Board rules limit each speaker to three minutes and prohibit them from addressing supervisors by name. But Aly continued talking when his time was up and his microphone was turned off. Supervisors’ Chairwoman Michelle Steel called for a 10-minute recess and a few minutes later ordered Sheriff’s officers to clear the room.

Aly stayed at the podium as sheriff’s security officers stood close by, facing him. The lead deputy overseeing security, Kevin Taylor, threatened to arrest a Voice of OC reporter who identified himself as a journalist and was filming the interaction from about 20 feet away. Taylor ordered the reporter to leave the public meeting chambers and the reporter ultimately complied. Later Taylor said the criminal charge would have been trespassing.

Eventually, Aly left the building after, he said, the officers threatened to use an electric-shock Taser weapon on him. 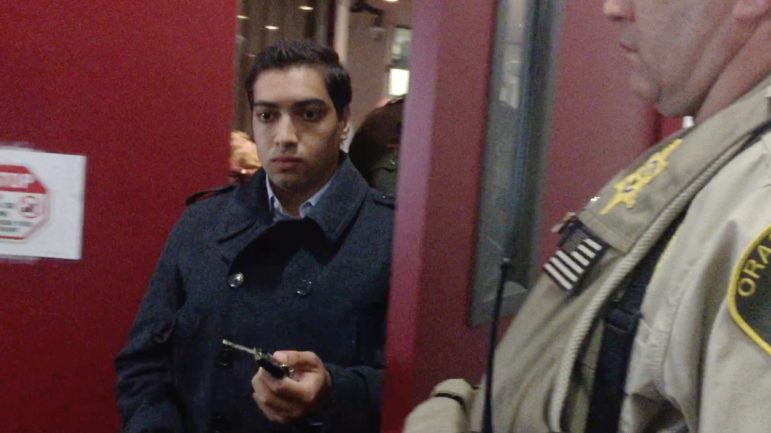 “They told me that if I did not cooperate then they would use a Taser” and that it would be “painful,” Aly later told Voice of OC. “So I cooperated.”

The meeting resumed about 30 minutes after the recess began. Supervisors did not discuss the homeless children issue.

Taylor, who serves as the sergeant-at-arms for supervisors’ meetings, declined to comment on Aly’s statement that officers threatened him with Taser.

Aly’s protest came amid an ongoing battle over public comments and homelessness at county supervisors’ meetings.

Activists say supervisors need to create more housing for the homeless, which a new UC Irvine study says would save the public $42 million per year.

Aly was one of more than a dozen members of the public to speak about homelessness Tuesday. All either were critical of the supervisors or called on them to do more to help the homeless.

Supervisor Todd Spitzer suggested the board hold a special meeting devoted to homelessness where the public could have more time to comment specifically on the issue, and voice frustrations.

“It’s our job to create a safe environment where people can come and be upset,” Spitzer said.

The American Civil Liberties Union (ACLU) also has threatened to sue supervisors over several of the their public speaking policies, including the ban on addressing supervisors by name.

Controversy erupted again at the end of Tuesday’s meeting in response to comments by Darrell Nolta, a frequent speaker who said the board has restricted the public to less and less time to speak at meetings over the years.

“Members of this board – some of you are foreigners – are un-American. You do not believe in the constitution. You don’t know what the constitution stands for. You profess that you know. But you do not know. You do not have it in your heart what the material stands for, the substance, the meaning of what is in this document,” Nolta said, waving a paper pamphlet.

He said Aly was a “very courageous individual” for speaking as he did at the meeting. “You individuals are just talkers” who only do something “when there is bad press. People of Orange County need to vote you people out,” he told the supervisors.

His comments drew a strong reaction at the end of the meeting from four of the five supervisors.

Supervisor Andrew Do was born in Vietnam and Steel in South Korea. The other three were born in the U.S.

“We have people now who directly confront individual supervisors by name, who now have gone beyond the realm of acceptable conduct, of acceptable civility in civilized society, to cast personal aspersions on people,” said Do.

“The next time somebody says something like that, I’m going to ask the chair to hold that person out of order, and I’m going to ask county counsel to look into what is it that we can do in the future to prevent things like that from happening.”

Referring to a commenter at a prior meeting, Steel said she’s “upset that somebody came here that [said] we don’t understand the freedom of speech and we…eat dogs and cats.”

“I never ate dogs and cats. And [I] was very offended by those people, the public speakers. And I really want them to do something about it, and I’m asking County Counsel…what [do] we have to do to prepare or how we are gonna to stop them.”

Bartlett said “personal attacks” against supervisors by members of the public should stop.

“You know the First Amendment rights are important, but there should be a level of, of respect and common courtesy and a proper decorum. And we shouldn’t have personal attacks coming at us on the dais,” Bartlett said.

But Supervisor Todd Spitzer said although he viewed Nolta’s comments as “completely out of line,” it’s part of the supervisors’ job to hear offensive speech from angry constituents.

“We got elected to put up with this,” said Spitzer, who noted the First Amendment gives “wide latitude” for the public to criticize elected officials.

“It is the arena, and if you don’t think you’re going to get bloody and dirty, then you’re probably in the wrong arena,” Spitzer told his colleagues.