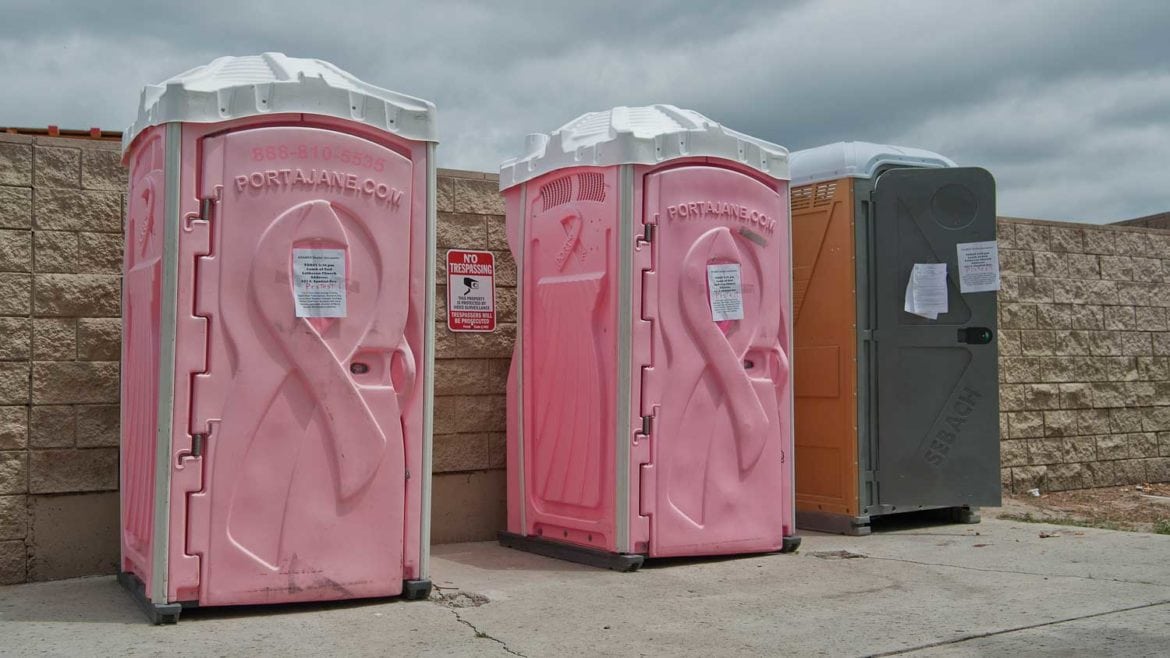 Homeless advocates purchased and installed these porta potties near the Santa Ana River in May, before Anaheim city officials removed them.

Not enough Orange County supervisors support portable restrooms at a homeless camp along the Santa Ana River to get them approved, according to Supervisor Todd Spitzer.

“There is not a board majority at this time to support issuing an encroachment permit,” Spitzer told Voice of OC after last week’s Board of Supervisors meeting, where several homeless advocates urged supervisors to waive a $2,000 application fee and allow advocates to install restrooms they purchased.

“I am working on an alternative plan, but I need some more time, and I’m hoping to come back to the board [with it] in a couple weeks,” Spitzer said, later adding he hopes to introduce the alternative idea Wednesday.

The rest of the supervisors didn’t return phone messages asking their positions. They held a closed-door discussion of the issue last Tuesday.

The controversy centers on a large homeless encampment near Angel Stadium and visible from the 57 freeway, which homeless advocates say is a last-resort for people amid a severe shortage of shelter beds and affordable housing.

Homeless people along the river currently lack restroom access at night, and county shelters that have restroom access for those who stay there are either full or close to capacity each night. Given that reality, advocates say people living along the river often go to the bathroom in buckets, bags, and other improvised containers, which risks spreading diseases among homeless people and to county residents who live in homes.

After county supervisors declined requests to place restrooms along the riverbed, advocates raised money on their own and purchased three porta-potties, which they placed along the riverbed until county officials ordered them removed due to lack of a permit.

Advocates have been seeking that permit, and say they’ve met the county’s requirements for a $1-million insurance policy and maintenance agreement for the restrooms.

At last week’s supervisors meeting, several public commenters asked supervisors to waive a $2,000 non-refundable fee to apply for the permit and to allow the porta-potties.

“I don’t understand why it is a health and safety hazard to have porta-potties down there, when they are going [to the bathroom] in the riverbed which drains to our oceans, which I’m pretty sure most people in this room use,” said Huntington Beach resident and activist John Safari.

“It’s more of a health and safety hazard for the entire county for the county to not have restrooms down there.”

Spitzer supported the request, publicly offering to pay the $2,000 fee himself, and holding up what he said was his personal checkbook.

“If the $2,000 is the obstacle to bringing humanity to the riverbed while we figure out what the short and long-term solution is, I will personally pay for it,” Spitzer said.

Spitzer holds up what he described as his personal checkbook as he offered to pay the $2,000 permit fee.

He said he would write the check if advocates provided documentation of the insurance and maintenance agreement “and then we can see see what happens with the county application process, okay? But the $2,000 is not gonna be the obstacle.”

Supervisor Andrew Do pushed back, saying the porta-potties could create other problems.

“Once we have porta-potties out there, then it leads to public safety concerns,” Do said.

“When you have structures that are enclosed at night in areas that are not patrolled by law enforcement…what happens if something bad [happens] in there?”

Additionally, Do said, if the county converts the riverbed into a home – or “domiciliary” – for people, the U.S. Army Corps of Engineers, which has some jurisdiction over the riverbed, “may come down and may say, ‘Hey you are violating some kind of regulation as far as the use [of] that space.’”

Supervisor Lisa Bartlett said she agreed “wholeheartedly” with Do, but that a more comprehensive discussion would have to take place among supervisors.

“This is something that has to be addressed by the entire Board of Supervisors, and I know that we have an item on our closed session today,” Bartlett said.

Advocates followed up that day by sending Spitzer’s staff copies of the agreements he requested.

But after the closed session, Spitzer said while he agrees there’s an “immediate” need for restrooms, there simply weren’t enough votes for the permit and he wouldn’t be wasting $2,000 on the application.

“I didn’t know the answer to that question until the outcome of that board meeting on Tuesday.”

“Supervisor Spitzer made an offer to pay the application fee if I produced the service agreement and insurance policy. I accepted his offer by performing my obligations,” Aly told Spitzer’s chief of staff in a text message.

“Spitzer specifically stated in a public meeting that he was offering to pay in an individual rather than official capacity, even physically holding up his personal checkbook. Todd Spitzer is now legally obligated to perform by paying the permit application fee.”

A legal expert also questioned whether the supervisors were legally allowed to discuss the restrooms situation in closed session.

“The Brown Act limits the events that can trigger a closed session to discuss a litigation threat, and none of them seems to fit here,” said Terry Francke, general counsel of the open-government group Californians Aware, in an email.

“ ‘Someone might sue us’ is a straight ticket to unlawful secrecy,” he wrote.

The County County’s office declined to comment through a spokeswoman.

Spitzer, meanwhile, says he was advised by county counsel that the bathroom situation is related to ongoing lawsuits about the riverbed encampment. However, none of the lawsuits are known to involve restroom access issues.

There’s also a dispute over who gets to decide whether to allow the restrooms.

While Spitzer said it’s up to supervisors, county staff say it would be a staff-level decision.

Meanwhile, the advocates say they will continue to fight for restroom access along the riverbed.