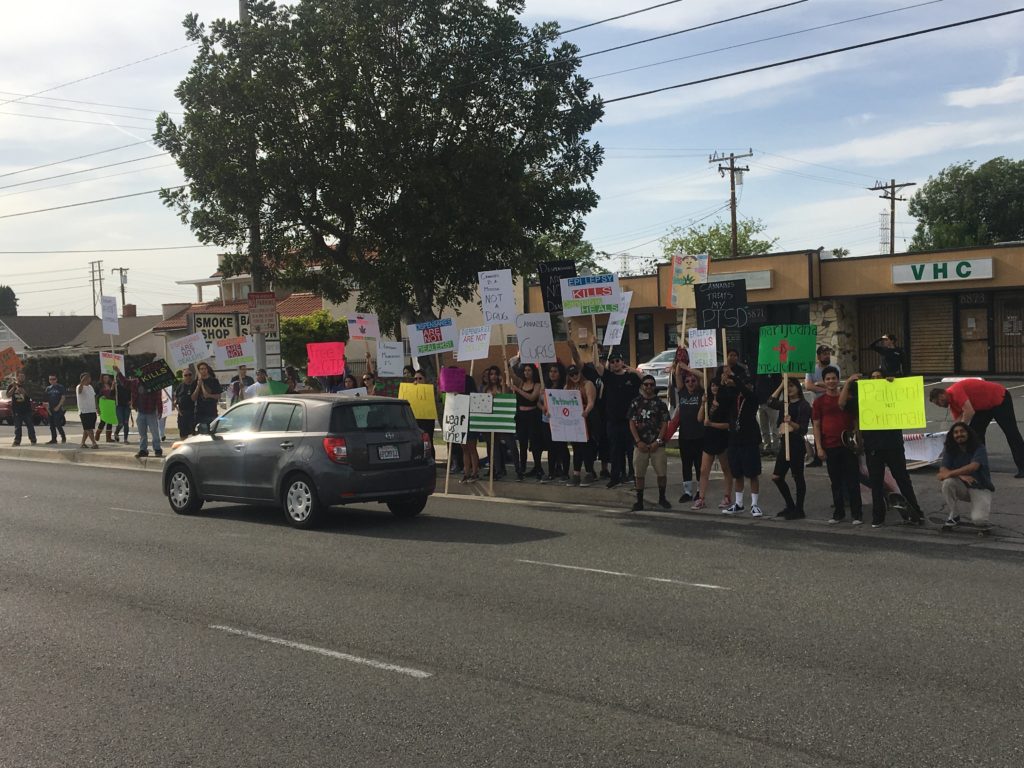 Protestors gather at 4:20pm on April 25 to protest the closure of Green Tree Remedy in Stanton.

On the afternoon of April 20, or “weed day,” the ubiquitous holiday for marijuana enthusiasts around the globe, pro-marijuana activists prepared to turn in the 2,992 signatures they’d collected for a ballot initiative repealing a citywide ban on medical marijuana dispensaries.

That same day, Orange County Sheriff’s deputies served an eviction notice that shut down Green Tree Remedy, the Stanton dispensary that financed signature gatherers for the ballot initiative, known as the “Fair Treatment of Veterans and Disabled Citizens Act.”

The ballot initiative not only would allow medical marijuana dispensaries in town, it would limit the number to three and the city would be required to issue a business license to 8871 Katella Avenue, home to Green Tree Remedy.

The ballot initiative and eviction are the latest developments in a long-running battle over medical marijuana between the city of Stanton and Green Tree Remedy, both of which claim to be doing what’s best for city residents.

Marijuana and how to handle its increasing legality in California is a significant issue for many communities.

Organizers for the dispensary argue the ballot initiative is about protecting access to medical marijuana for veterans and the disabled in a city where officials are determined to eliminate dispensaries.

Green Tree Remedy has been operating in Stanton without a business license for more than four years, although the dispensary says it has tried to get one repeatedly and has been denied each time.

Mayor Pro Tem David Shawver says he’s not against medical marijuana, but for a 3.2-square mile city that recently raised its sales tax to deal with a fiscal emergency, he doesn’t think Stanton can afford the law enforcement costs associated with having a dispensary in town. The city contracts with the Sheriff’s Department for its officers.

Besides, said Shawver, Stanton doesn’t need a dispensary. Marijuana is easily accessible in neighboring cities and by delivery, he said. But, he added, the dispensaries make enough money to fend off all city legal action.

“They are generating millions of dollars in tax free resources illegally to expand…all under the guise of helping veterans and disabled,” Shawver said in an email to a reporter.

On the other side of the issue, attorney Matt Pappas, who represents Green Tree Remedy and several other dispensaries countywide, questioned how a securely-run marijuana dispensary is any different from commercial pharmacies that dispense opiates and other prescription drugs.

“Where is [Shawver’s] empirical data that there’s a cost for the city as opposed to any other business?” Pappas said “Green Tree [Remedy] is a very effective dispensary that has a good level of sales, its surrounding businesses benefit from that.”

“The [Stanton] city council person is an individual who grew up in the ‘reefer madness’ generation – they’re ancient and decrepit and harbor discriminatory animus toward marijuana patients,” Pappas said. “And so those individuals are doing everything they can to thwart the electoral process.”

“When it comes to medical marijuana, the cities think they can do whatever they want to do with impunity,” he added.

Stanton is one of many Orange County cities that have tried for years to crack down on medical marijuana dispensaries.

Neighboring cities like Anaheim and Garden Grove have tried to shut down pot shops with heavy fines, by going after property owners that rent space to dispensaries or cutting off their water and electricity, only to find the shops re-opening, sometimes on the same day as a raid.

In anticipation of the passage of Prop. 64, Stanton passed an ordinance in October 2016 that would, contingent on the legalization of recreational marijuana, change the city’s rules to comply with statewide legalization. But it also largely kept the city’s ban on selling pot and required permits for people who wanted to grow their own.

By late November, pro-marijuana activists had gathered enough signatures for a referendum to repeal parts of the October ordinance, including restrictions on marijuana cultivation, possession and sales.

Once it was clear activists had enough signatures, the City Council in January repealed the ordinance, but kept language in the municipal code that continues to ban the operation of marijuana dispensaries.

Pappas says the City Council has ignored voters by holding onto the dispensary ban despite the referendum, and argues the language banning pot shops should not be in place.

But a judge has OK’d the city’s efforts to shut down Green Tree Remedy. The dispensary remains closed as of Tuesday.

The dispute is getting more heated. In April, signature gatherers for the initiative were caught on video in a physical confrontation with Shawver’s adult son when they knocked on Shawver’s door while gathering signatures in his neighborhood.

Shawver claims the signature gatherer punched his son in the face and said he plans to file assault charges.

On the other side, Pappas claims in a Superior Court complaint that Councilman Alexander Ethans drove up to signature gatherers in November and rolled down the driver-side window of his car, yelling “Your petitions smell like marijuana! You don’t live here! Get out of Stanton!”

“I will do everything in my power to make sure the referendum fails,” Shawver is said to have shouted at a November 2016 city council meeting, according to the same court complaint.

On the afternoon of the April 20, Shawver sat in his red pick-up truck watching Sheriff’s deputies and the Orange County Fire Authority clear out Green Tree Remedy and board up a clinic next door. He said he has tried contacting anyone he could think of, from the national Drug Enforcement Agency to the Attorney General of the United States, Jeff Sessions, for help keeping dispensaries out of Stanton.

He believes the dispensaries are looking to take advantage of a small city, population 38,719,  and hijack the initiative process for their own financial benefit. He points to the fact a Santa Ana dispensary owner, Steinlee Saeteun, pulled papers to run for City Council in August, although he is not registered to vote in Orange County. Saeteun never returned the paperwork to City Hall, according to City Clerk Patricia Vazquez.

“The illegal marijuana Cartel’s ballot initiative will allow them to take over control of Stanton’s local government,” Shawver wrote an in email.

The City Clerk and county Registrar of Voters currently are validating signatures for the latest ballot initiative, which needs 1,445 signatures to qualify. The City Council then would have the option of repealing the dispensary ban, placing the initiative on the ballot for a special election or on a ballot in 2018.

Pappas says it’s only fair that Green Tree Remedy be written into the ballot initiative, given how the city has treated his client and how much the business has invested in the ballot measure.

“That’s the dispensary that helped…fund the process of the ballot initiative and so…it should be grandfathered in,” said Pappas. “It’s not right for them to be subject to closure and not be able to participate in the political process.”

He said Green Tree Remedy is trying to avoid participating in “pay to play” politics.