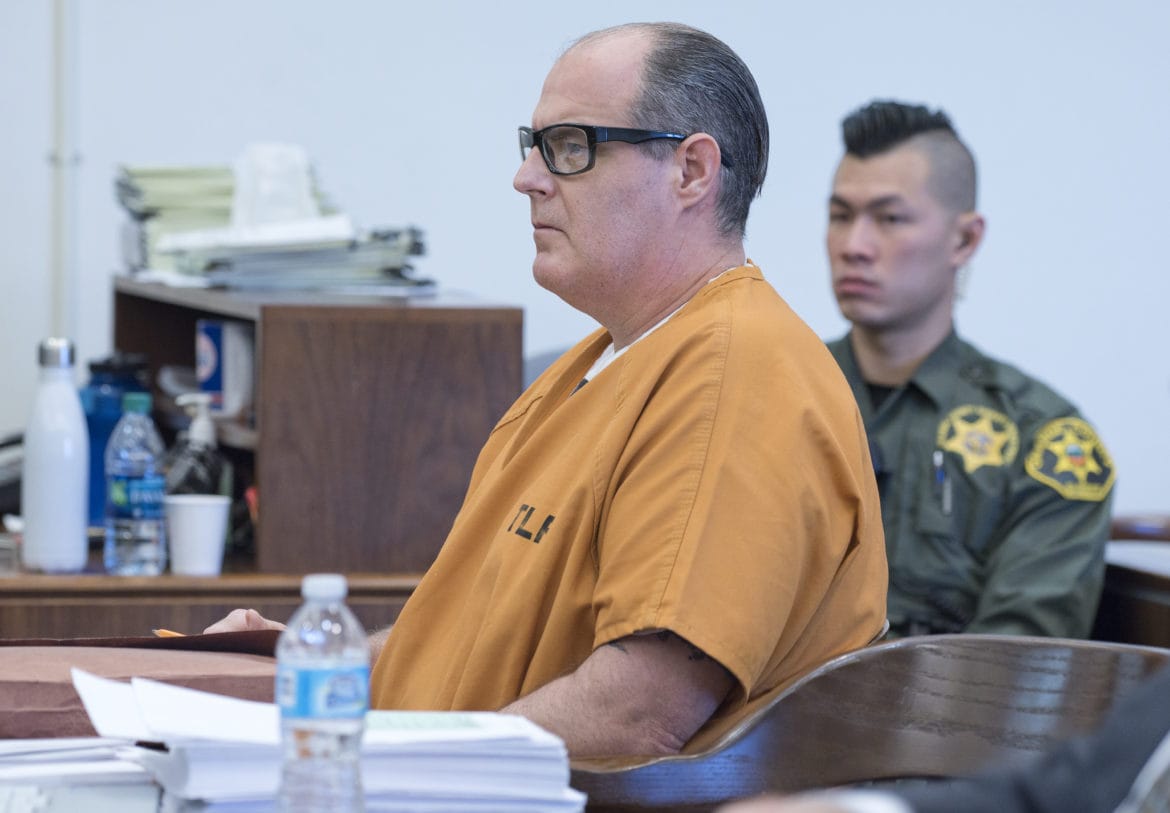 Scott Dekraai, who murdered eight people in Seal Beach in 2011, sits in a courtroom at the Central Justice Center in Santa Ana during his trial on Monday, June 5, 2017. JEFF ANTENORE, Voice of OC Contributing Photographer

Orange County’s worst mass murderer Scott Evans Dekraai, who shot and killed eight people at a Seal Beach beauty salon in 2011, publicly apologized Thursday to the sister of one of his victims.

Bethany Webb, whose sister Laura Elody Webb was a stylist at the Salon Meritage, stood in the courtroom, looked directly at Dekraai and wrung her hands as she criticized him for calling her sister and other victims “collateral damage” in police interviews after the shooting.

“You said they were collateral damage, that they were somehow insignificant,” said Webb.

“I’m sorry. I’m very, very sorry,” said Dekraai from his seat at the defense table before he was told by Judge Thomas Goethals that it wasn’t his time to speak. It was the first time Dekraai has publicly apologized for the murders.

His apology occurred at an ongoing hearing where Goethals is trying to determine whether or not the Sheriff’s Department destroyed or tried to hide documents subpoenaed by defense attorneys in 2013.

Although Dekraai pled guilty in 2014, his sentencing has been delayed by allegations of unconstitutional use of jailhouse informants and delays in the disclosure of documents. The outcome of this hearing, which began late last month, could affect whether or not Goethals decides Dekraai’s rights were so egregiously violated that he will throw out the death penalty as a sentencing option.

The hearing has been punctuated by the emotional testimonies of families of victims, some who have come day after day to listen to hours of testimony by Sheriff’s officials.

Webb, whose mother was also shot by Dekraai but survived the attack, said she has often dreamed of her sister’s death. But she said her family does not believe in the death penalty.

“My family does not believe you can make anything right by condoning, by saying there’s anything humanly good about killing somebody other than [for] self-defense,” Webb said.

Paul Wilson, whose wife Christy was a stylist at the salon when she was gunned down by Dekraai, was critical of the Orange County District Attorney’s Office, which headed prosecution of Dekraai before Goethals recused the entire office from the case in 2015.

“The people we trusted let us down – Tony Rackauckas,  Dan Wagner, Scott Simmons, they failed us,” Wilson said.

Goethals removed the DA’s office as prosecutors of the case because of repeated failures to turn over evidence.

Known as the jailhouse snitch scandal, disclosures of misuse of informants has led to overturned convictions and reduced sentencing in at least six other murder or serious criminal cases unrelated to Dekraai.

He also blasted an Orange County Grand Jury report that was released Tuesday, called “The Myth of the Orange County Jail Informant Program,” which said that while there is legal use of informants in county jails, there’s no systemic misuse of informants and any misconduct is largely confined to “a few rogue deputies.”

The Grand Jury called Goethals’ hearing a “witch hunt for agency corruption” that has led to unnecessary delays in the case.

“What a slap in the face to each one of these families,” Wilson said of the Grand Jury report.

“I ask every day why, why would someone want to hurt and devastate so many families…and then I come into this courtroom and look right over there…that coward,” said Wilson, pointing at Dekraai who sat just a few feet away. “I hope you will end this for us, especially with those of us who struggle with not being able to make it to court every day.”

The hearing, which will determine whether or not there is a sentencing trial, may go on for a few more weeks, as Assistant Public Defender Scott Sanders, Dekraai’s lawyer, is likely to call at least four more witnesses, including Sheriff Sandra Hutchens. Hutchens may, depending on her schedule, testify the week of June 26 or the week of July 3.

So far 15 Sheriff’s Department officials have testified in the hearing, seven who have invoked their Fifth Amendment right against self-incrimination in order to avoid testifying. Some have been granted immunity and required to testify, including Lieutenant Martin Ramirez, who testified Thursday.

The hearing continues on June 26.