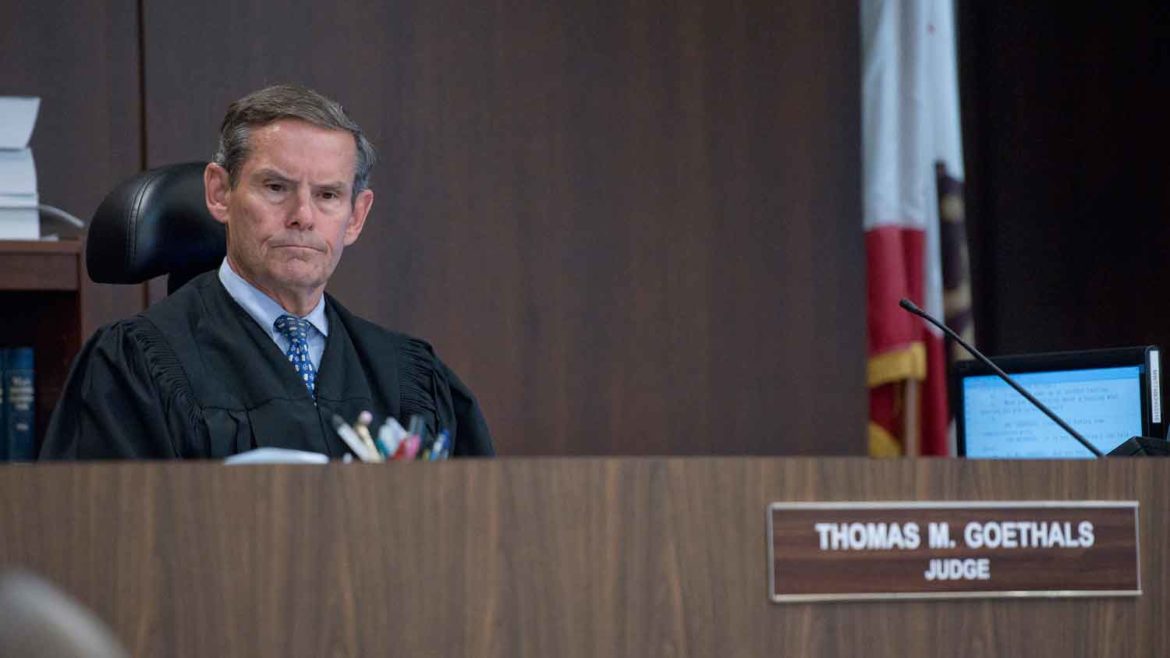 Judge Thomas Goethals presides over the trial of mass murderer Scott Dekraai in a courtroom on the 11th floor of the Central Justice Center in Santa Ana on Monday, June 5, 2017.

And the situation continued for years, Briggs said in response to a question from Superior Court Judge Thomas Goethals.

Briggs was testifying as part of a hearing in the mass murder case of  Scott Evans Dekraai, who confessed to killing eight people at a Seal Beach beauty salon in 2011.

Briggs was the first of the 11 Sheriffs employees who have testified so far to say, based on a cache of deputies’ notes, that it is clear deputies were developing and using informants in the jails.

“We had a constant turnover of supervisors. Constant turnover of lieutenants. And the deputies were kind of — if you want to refer to it as the inmates were running the asylum on that occasion,” Briggs said. “And I think with all the accolades being given to the deputy sheriffs, they were senior deputies, trusted deputies, by all accounts everybody thought they were doing a great job, so nobody looked into it.”

The source of many of the revelations in the evolving jailhouse snitch scandal is a 1,157-page document known as the Special Handling log, which first became publicly known in 2016. The log has detailed how Sheriff’s deputies cultivated and developed confidential informants in the jails on behalf of prosecutors, without disclosing those activities to defense attorneys.

“The log suggests to the reasonable reader perhaps that that kind of improper misconduct was going on for not days or weeks or months but probably years,” Goethals told Briggs. “Do you agree with that?”

Goethals continued: “So in hindsight these deputies who were getting all these accolades and awards should have been facing disciplinary action?”

During his first day of testifying on Monday, Briggs said, “when you read the log, you can see that quite a few deputy sheriffs spent a good deal of their time cultivating and utilizing confidential informants.”

Dekraai  confessed to the murders but the penalty phase to determine his sentence has been delayed, as Goethals decides whether Dekraai’s right to a fair trial has been violated so egregiously that he should rule out the death sentence as a punishment.

Of those who have testified, three deputies, a sergeant and a lieutenant invoked their Fifth Amendment right against self-incrimination, although the latter two were required to testify after being granted immunity by prosecutors with the California Attorney General’s office.

The hearing, which is in its third week, is focused on whether the Sheriff’s Department delayed, withheld or destroyed key documents despite subpoenas ordering they be produced.

Briggs said he didn’t know about the use of informants until Assistant Sheriff Adam Powell walked into his office in 2016 asking about it.

“I had no idea of any of this were going on. They never brought it to my attention,” Briggs said.

Much of the testimony has involved a semantics debate over whether the informants referred to in the Special Handling log were confidential informants receiving directions from law enforcement, or just inmates who volunteered information without receiving any benefits in return.

Lieutenant Dave Johnson, who testified last week that the department has no formal informant program, said, after repeated questioning, he did not believe the cultivating or recruiting of informants occurred when he was a sergeant for Special Handling.

When shown a document he wrote that said special handling deputies “handle and maintain” confidential informants as part of their duties, Johnson said he should have used the word “facilitate” instead.

Briggs, meanwhile, said Tuesday that not only were deputies cultivating informants but they also appeared to be placing them into the same cell block for housing.

“Looking at where they were moving folks and looking at the special handling log, they were certainly putting informants that they were cultivating into L20,” Briggs said, adding that it was “totally inappropriate.”

Training about the meaning of an informant was not clear, Briggs said, and the word came to mean “anybody who told us anything.”

“I think we may have been misinterpreting the word confidential informants for decades,” Briggs said.

Assistant Public Defender Scott Sanders, meanwhile has questioned the shift in the Sheriff’s Department’s internal vocabulary about informants. The term “source of information” was introduced to distinguish informants from inmates who volunteer information, a move which Sanders argues created cover for deputies who testified previously that they did not work with informants.

One of the deputies who took the Fifth was Seth Tunstall, who is referenced in the Special Handling log for being so talented with informants that fellow deputies requested he be allowed to “teach us what it takes to cultivate a CI [confidential informant] on the street.”

Briggs said it was his opinion that Tunstall, who was assigned to a gang task force with Santa Ana Police Department, set the tone for other deputies to begin working with informants.

“I think the Special Handling log was evidence that they [deputies] took it a step further. I think it started with when Seth Tunstall went to the Santa Ana Gang [Task Force],” Briggs said.

“You believe Seth Tunstall was changing the way Special Handling at both jails was doing business?” Sanders asked.

Johnson and another Sergeant, Raymond Wert, both insisted that they disapproved of deputies cultivating informants. But if it was happening in their jail, it was happening without their knowledge, they said.

“In hindsight, have you concluded that you were stretched too thin to know what your Special Handling deputies were doing?” asked Goethals. Goethals later asked Wert the same question, and received the same answer.

“I would agree with that, yes,” Johnson replied.