Judge Thomas Goethals reads his sentencing decision in the Scott Dekraai murder trial, striking the death penalty as a possible sentence, during a hearing on Friday, August 18, 2017.

In a decision announced in a packed courtroom, Goethals sharply rebuked both the Orange County District Attorney and the Orange County Sheriff’s Department (OCSD) for “chronic obstructionism” and failures to turn over evidence to his court. Those failures, he ruled, mean Dekraai cannot receive a fair jury trial to determine his sentence.

It effectively blocks attempts by the California Attorney General, which took over prosecution of the case from the OC District Attorney in 2015, to pursue the death penalty at a trial.

“The truth is, for whatever reason, the [Orange County Sheriffs Department] has consistently responded to this court’s lawful orders with such indolence and obfuscation that this court had lost confidence that it can ever secure compliance from the prosecution team with those orders,” Goethals said minutes before announcing his decision to dismiss the death penalty. 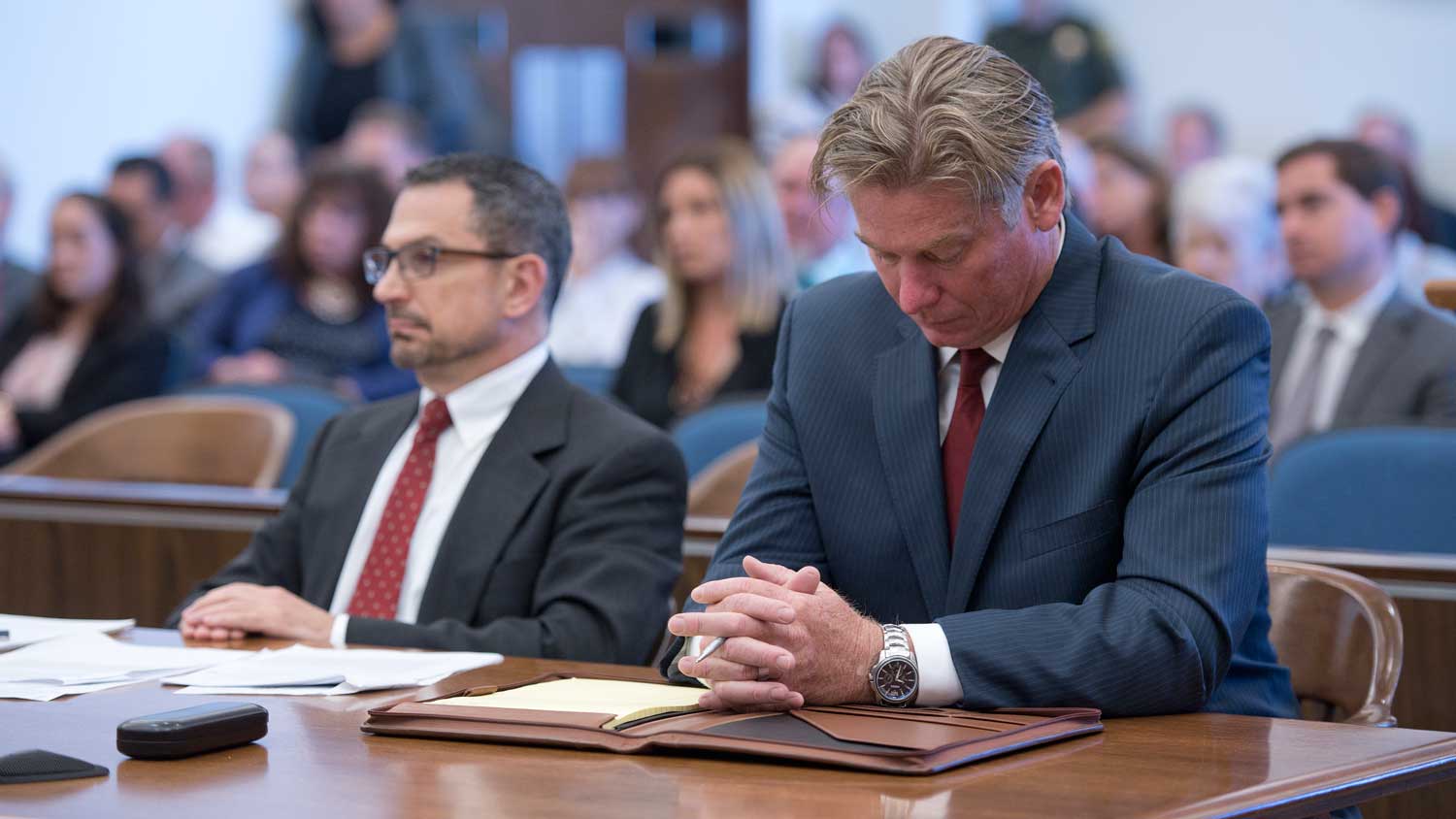 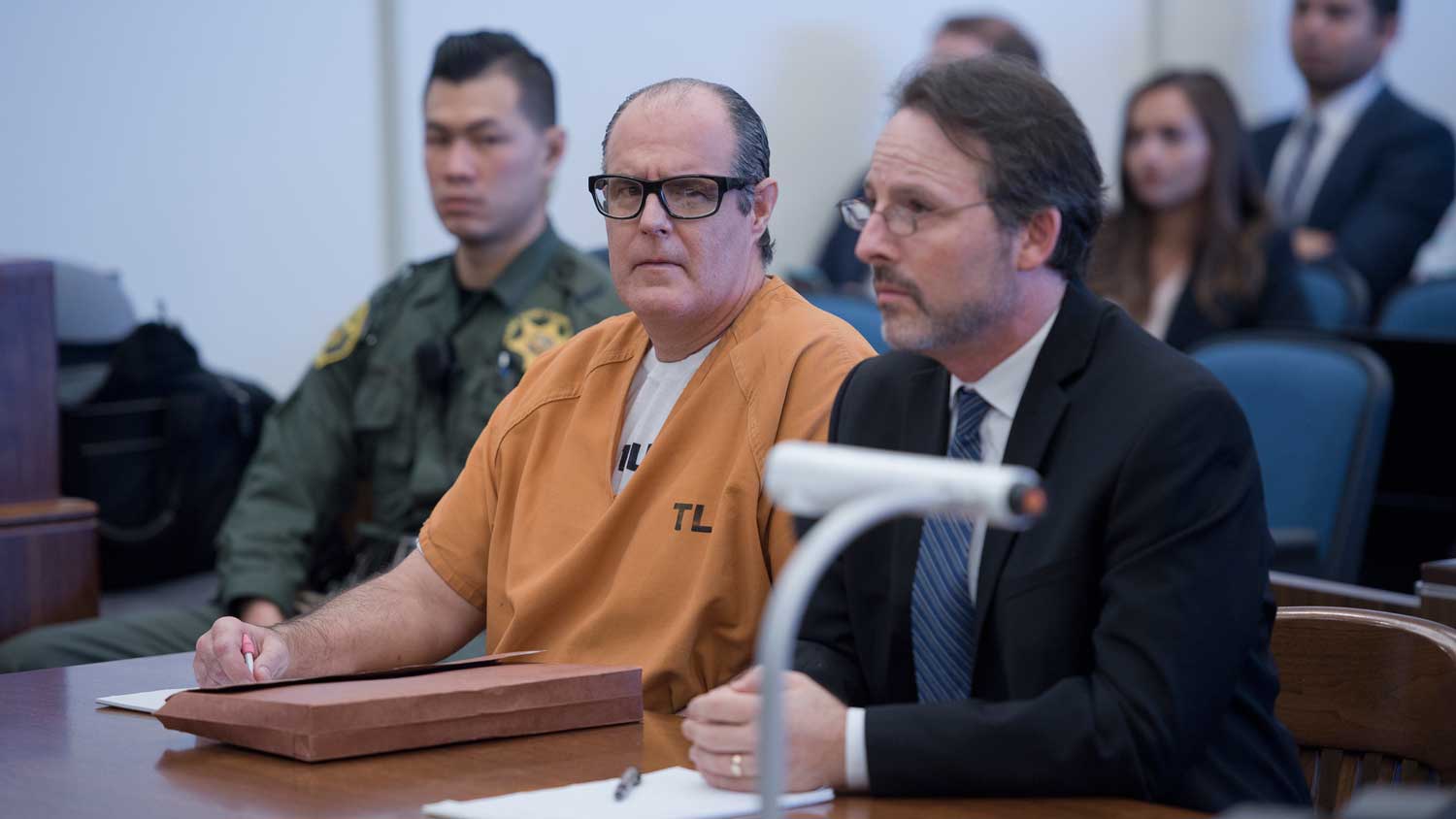 Goethals said it would be “unconscionable, perhaps even cowardly” to ignore the misconduct by the prosecution team.

“As a result, this court now exercises its discretion to strike the death penalty as a potential punishment for this defendant, despite the horrendous nature of his crimes,” Goethals read from his ruling.

Deputy Attorney General Michael T. Murphy would not say after the ruling whether his office would appeal the decision.

Goethals will likely sentence Dekraai to eight consecutive life terms in prison without parole, one term for each person he killed, at a sentencing hearing on Sept. 22.

Goethals’ ruling comes after weeks of hearings in which he heard testimony from 21 Sheriff’s Department witnesses.

The ruling is a win for Assistant Public Defender Scott Sanders, who called on the judge to dismiss the death penalty as a sanction against prosecutors for alleged attempts hide or delay the disclosure of evidence.

Although Dekraai confessed to law enforcement and pled guilty to the crimes in 2014, the revelation that Sheriff’s deputies placed an informant in a cell next to Dekraai, resulting in an illegal confession, has transformed his murder case into a wide-ranging exposé of the use of jailhouse informants by Orange County law enforcement, known as the “jailhouse snitch scandal.”

Sanders has argued that the Sheriff’s Department for decades illegally placed informants next to inmates in jails to get incriminating evidence and confessions, while prosecutors routinely withheld informant evidence from defense attorneys, violating defendants’ rights to due process.

While the Sheriff’s Department and District Attorney’s office have repeatedly denied the existence of any sanctioned jailhouse informant program, Goethals has ruled, and the California Fourth District Court of Appeals has upheld, that there are “systemic” problems with informant use in Orange County.

Problems with disclosure of key evidence related to the use of informants has resulted in overturned convictions or reduced sentences in six separate cases. In the Dekraai case, it resulted in the recusal of the entire District Attorney’s office from prosecuting the case in 2015.

The California Attorney General and U.S. Department of Justice are also conducting investigations into the allegations.

At Friday’s hearing, Goethals read several sections of the Court of Appeals ruling affirming his decision, which described a “well-established program” where confidential informants were placed “next to targeted defendants who they knew were well-represented by counsel to obtain statements.”

“There was also evidence the prosecution team explicitly or implicitly promised consideration in exchange for information and Perez and Moriel expected a benefit,” Goethals read from the appeals court ruling, referring to two informants named Fernando Perez and Oscar Moriel.

“…The court cannot help but observe that perhaps the only two prosecutorial/law enforcement agencies in the great state of California still enveloped in denial as to what has happened here over the years are the Orange County District Attorney and the Orange County Sheriff,” Goethals wrote.

He also referred to an Orange County Grand Jury report in June that called the idea of a jailhouse informant program in county jails “a myth.”

“This well-established program is not a myth, nor is it any sort of fantasy, fairy tale or fable…although created and operated by word of mouth, this program has been very real for many years,” Goethals wrote.

Goethals also pointed to a department-wide letter Hutchens wrote to staff after the release of the Grand Jury report, in which she writes that the department has “never had a systemic program designed to circumvent constitutional rights as has been alleged in the courts and the media.”

“In the face of such ongoing denials, and given OCSD’s compliance record to date, how can this court generate any confidence that the Sheriff’s Department will produce all relevant documentation in its possession concerning a problem which the Sheriff herself apparently continues to believe is non-existent?” Goethals wrote.

Shortly after Goethals’ death penalty decision, the Sheriff’s Department issued a statement saying it was  “disappointed” by the ruling.

“The facts in this case clearly supported a death penalty verdict,” according to the statement. “Notwithstanding the issues that were raised by the Court’s ruling, we believe the defendant would have received a fair trial during the penalty phase of the criminal proceedings.”

“The decision to remove the death penalty rests at the feet of Judge Geothals (sic) and nobody else,” the statement concludes.

Sanders, during a brief press conference outside the Public Defender’s office, said Goethals’ ruling was “the right ruling.”

Tom Dominguez, president of the Association of Orange County Deputy Sheriffs, said the union stands “behind the integrity and professionalism of the deputies.”

“Judge Goethals’ ruling in the Dekraai case highlighted discovery production failures of the Sheriffs Administration as well as failures to provide education and training to the front line deputies involved in these matters,” Dominguez said in an emailed statement. “The deputies involved in these matters acted in a good faith attempt to respond to prosecutorial requests in the administration of justice.”

The District Attorney’s office, meanwhile, said in a statement that “given the pattern and tenor of his previous rulings, Judge Goethals’ decision does not come as a surprise.”

“Whether some members of the Orange County Sheriff’s Department failed to produce tangential information in a timely manner has nothing to do with what Dekraai did and the fact that Dekraai deserves the death penalty,” the statement reads.

County Supervisor Todd Spitzer, who is running for District Attorney, called on Sheriff Sandra Hutchens and DA Tony Rackauckas to both resign.

Hutchens announced in June that she would not seek re-election next year.

The surviving families of Dekraai’s victims have expressed mixed views on the death penalty, with some supporting and others vehemently against it.

LeeLee Cusenza, whose sister Michelle Fast died in the shooting, said she felt a “mixed bag of emotions” but mostly relief at the judge’s ruling.

Bethany Webb, whose sister Laura Webb Elody was a victim, has been vocally opposed to the death penalty, in part because she believes Dekraai would sit on death row during a lengthy appeal process and never be executed.

“Do not appeal – the families do not want them [the Attorney General] to appeal,” Webb said.

Paul Caouette, whose father David was shot in the head while sitting outside of the Salon Meritage, said he was disappointed in how long it took for the judge’s ruling to happen.

“If this was going to be the outcome, I think it could have been five and a half years ago,” Caouette said.

For details of the Dekraai case and the jailhouse informants issues, click here.