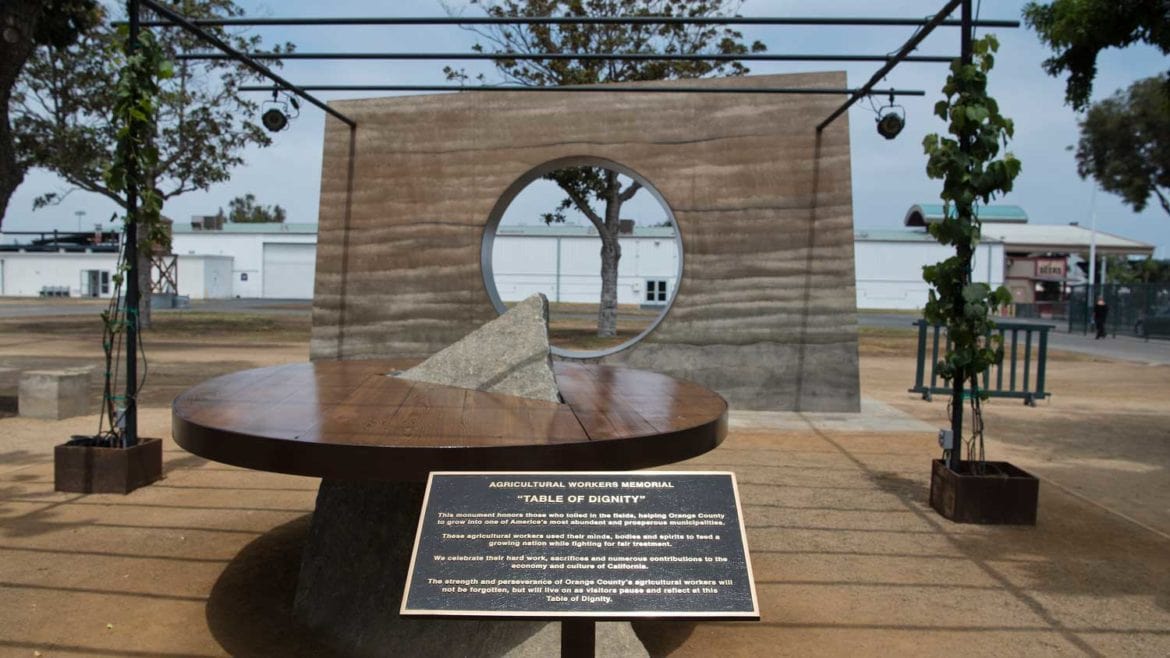 A new Agricultural Workers Memorial at the Orange County Fairgrounds, featuring a “Table of Dignity,” gives tribute to those who “toiled in the fields, helping Orange County to grow into one of America’s most abundant and prosperous municipalities.”

This weekend, I witnessed an unveiling at the state-owned fairgrounds in Costa Mesa that would have been unthinkable when Voice of OC launched back in 2009, right in the midst of an intense battle to privatize the fairgrounds, led by then-Gov. Arnold Schwarzenegger’s appointees to the board of the 150-acre OC Fair and Event Center, as the fairgrounds officially is called.

Farm workers now have a monument, a table of dignity, where their labor and efforts are permanently recognized, just across from the Centennial live Farm exhibit and alongside a series of other recent unveilings, such as the renovated Pacific Amphitheatre and a veterans’ museum called Heroes’ Hall.

“We cannot undo the injustices agricultural workers suffered but we can and must recognize their contributions, celebrate their lives and honor their sacrifice,” said OC fairboard member Ashleigh Aitken, who led the unveiling Friday.

The interactive art exhibit for farm workers, put together with the help of Arts OC, features a large table that honors the historic and ongoing sacrifices of agricultural workers, which keeps America fueled and fed.

It hasn’t been easy to finish the project, which was originally unveiled in September 2015 with an initial budget of $90,000 that swelled to over $350,000 because of structural issues with the design that also significantly delayed the exhibit’s opening to the public.

The original design team selected for the workers’ memorial was New York-based artist Joshua Sarantitis and Southern California-bred artist Ricardo Mendoza. A specialist firm in geological art, Rammed Earth Works, finished the archways around the table and several large paintings inside the arches were done by local artist Higgy Vasquez.

Around the large table, are granite stumps gathered between two large earthen walls, where the paintings with the words, “Justicia,” are emblazoned across the arches, welcoming those who enter to rest, reflect. 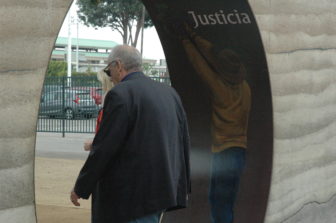 A plaque near the table lets visitors know the idea behind the monument and officials expect the whole place is to be eventually shaded by a canopy of grape vines. 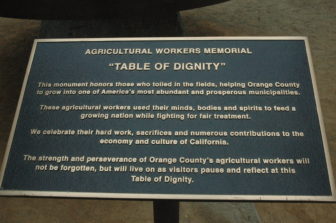 That was the nametag slapped on this property back in 2009, when in the dead of night during a long legislative session dominated by tense budget arguments, nearly all of Orange County’s state legislators voted to authorize the sale of their own fairgrounds – many by mistake.

Fair board members led the charge telling most of Orange County’s political elites there was a plan in place.

Yet when fair activists gathered nearly 50,000 signatures on petitions and presented them throughout city halls across Orange County, the plan stalled.

Yet throughout the policy debate, it became clear there was no real plan for the property, it seemed, just a real estate-focused, frenzied play to make money off a state asset.

Proof of that is you’ve never heard from those proponents ever again.

The fight, which eventually ended up in court, went on to the last breaths of the Schwarzenegger administration – with emergency meetings even attempted on New Year’s Day.

Yet the people won out here, thanks in large part to the hard work of many OC Fairgrounds Preservation Society activists like Theresa Sears (who now coordinates volunteer Opeds with Voice of OC as Involvement Editor) and pro-bono attorneys – like Attorney Wylie Aitken (Chairman of the Voice of OC board of directors), who defended the property in court alongside his daughter Ashleigh, who would later introduce the Workers Memorial as a fair board member herself. 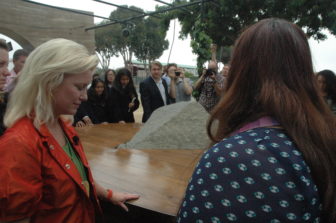 I learned an important lesson throughout the several years that I covered the fairgrounds saga that has come to really influence Voice of OC as a local, non-profit news agency.

People can make a difference – especially when they get information in real time.

Fairgrounds activist Reggie Mundekis raised legitimate questions about the increased cost for the workers’ memorial given the design problems.

At last Friday’s re-opening for the outdoor art exhibit at the fairgrounds, concerns about the content of the design also were raised.

Santa Ana Councilman Jose Solorio – who himself is the son of farm workers – told people he felt let down because there wasn’t more informational materials around the exhibit about farm workers. 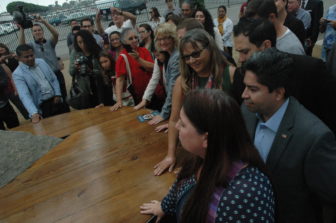 “I’m pleased they unveiled this significant exhibit but, as a son of farmworkers, I feel it’s still incomplete,” said Solorio, who ironically was part of the original group of legislators that voted to authorize a sale of the fairgrounds. Solorio later worked with activists to reverse the sale.

Local progressives have recently been critical of Solorio, even labeling him the Latino Trump, for his support of ICE detention efforts in Santa Ana as well as gentrification of the city’s downtown.

Yet on this issue, Solorio is choosing to push the fair board, seeking to have a more robust explanation of immigrant labor at the exhibit.

“The history on the placards should reflect the fact that the farmworkers who have toiled our farms all these years included immigrants, especially those from Mexico and Japan. Not telling that part of our state’s and county’s story keeps farmworkers in the shadows.”

Fair Board member Nick Berardino – who pushed the initial idea and budget for a monument to farm workers acknowledged Solorio’s concerns, adding that he welcomed any input on the memorial, saying it’s a work in progress.

Berardino also said he’s putting together a committee to continue developing a curriculum for the memorial and wants it to be historically accurate as well as engaging for visitors. He said the fair board would be reaching out to people like Solorio for help in designing and fundraising for the continued expansion of the workers memorial.