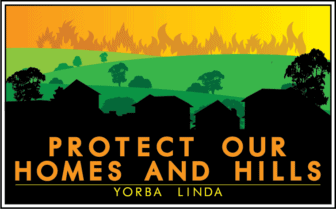 Yorba Linda, CA October 16, 2017 – The residents’ group Protect Our Homes and Hills (POHAH) has been engaged in a land use battle of monumental proportions with the County of Orange since 2012. The 4th District Court of Appeals ruled on Friday the 13th, that claims for a defective Environmental Impact Report (EIR) on Esperanza Hills were accurate.

The 340-unit Esperanza Hills project on 469 steep hillside acres above Yorba Linda was originally approved by the Orange County Board of Supervisors in June 2015. POHAH, along with four other co-petitioners (Hills For Everyone; Friends of Harbors, Beaches, and Parks; Endangered Habitats League; and the California Native Plant Society), litigated this project. Petitioners won a California Environmental Quality Act lawsuit under Judge Claster in late June 2016 overturning the project approvals, entitlements, and EIR. Within the last few weeks Judge Claster approved the revised EIR and finalized the Writ—meaning the court’s conditions of the first lawsuit had been met. Then the Appellate Court decision was issued, essentially overturning the project again.

Marlene Nelson, co-chair of POHAH, stated, “From the get-go our interest has been in public safety and a reduced density. We sincerely hope the developer takes this to heart with our latest court victory.” In addition to the 2015 lawsuit, writ, and the appeal, residents also carried the burden of a new lawsuit filed after the Board of Supervisors’ approval of the revised project in May 2017. “It became almost comical that the project’s entrance transformed at every public meeting held. How do you evaluate the impacts when the project keeps changing?”

By way of background, residents appealed four main issues lost in the original 2015 lawsuit. These included: 1) Project Description (adjacency to Chino Hills State Park), 2) Fire Evacuation and Access, 3) Biology (impacts to sensitive plant species), and 4) the project’s Water Use. Based on the appellate court decision: the County needs to recirculate the Esperanza Hills EIR because of its deficiencies and inadequate analysis on project description, fire evacuation/access, and water use.

Interestingly, residents offered numerous solutions to their concerns at the May 2017 Board of Supervisors public hearing, including: a reduction in density and project footprint, additional daily access, reduction in greenhouse gases through installation of solar, and much more. Only Supervisor Todd Spitzer, District 3, voted against the project approvals because of his concern for safe evacuation and neighborhood impacts. Usually the home district supervisor is given deference, but not in this instance. Instead, the vote was 4-1 for project approval.

A key concern has always been wildfires. Residents are always grateful for the quick action of firefighting personnel, but as was reiterated in the recent Canyon Fire 2—a Santa Ana wind driven fire is very difficult to extinguish. In this instance, the two Canyon Fires together burned nearly 12,000 acres and damaged or destroyed over 70 homes in the surrounding cities and scorched three popular regional parks, as well as Chino Hills State Park. The fact that the Court of Appeals understood the need for adequate fire planning, evacuation, and access was a welcomed sigh of relief for Yorba Linda neighbors. In 2008, during the Freeway Complex Fire, Yorba Linda residents sat stalled in traffic and literally couldn’t evacuate. These are the same streets that the Esperanza Hills project would empty onto.

The POHAH Leadership Team, consisting of residents west and south of the project, have been fighting this poorly placed sprawling project for five years. “It’s high time our officials put public safety first, and this court decision is proof positive that residents were right—again. We hope the Supervisors hear this loud and clear and stop playing games with our safety,” Nelson added.

Protect Our Homes and Hills is a community organization based in Yorba Linda. Learn more at ProtectYorbaLinda.com.