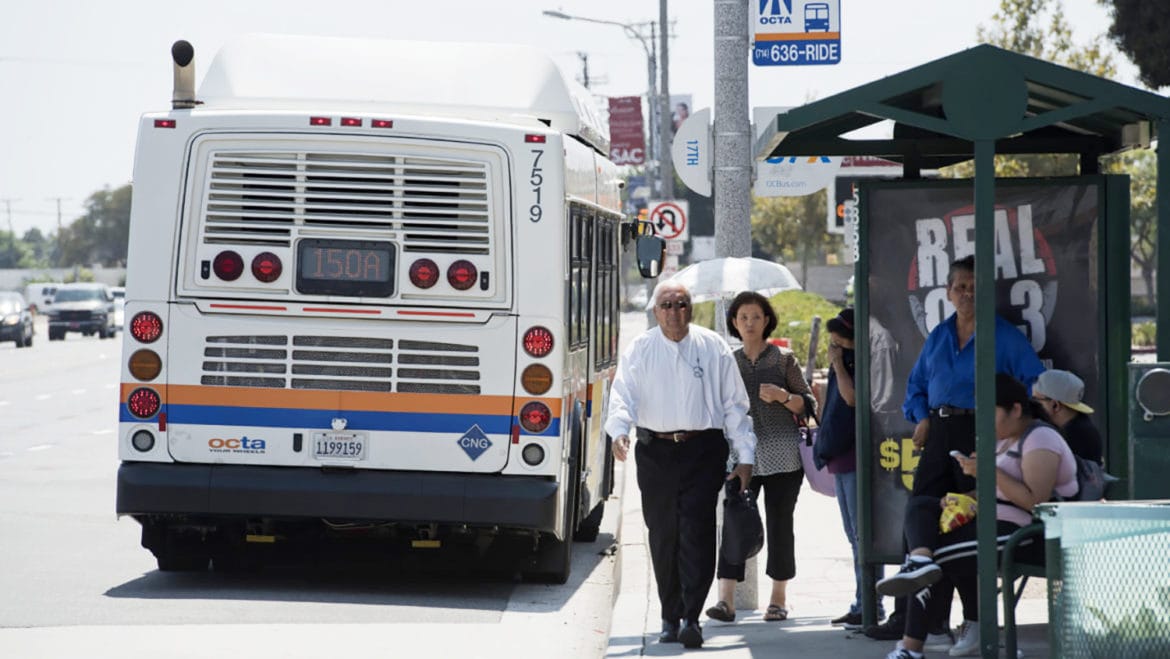 An Orange County Transit Authority bus drops off passengers at a bus stop on Bristol Street, in front of Santa Ana College, in Santa Ana on Friday, September 1, 2017.

The agency conducted its largest ever overhaul of bus routes last year. It generally cut service in south county and shifted those resources to busier routes in north and central Orange County, where the majority of the system’s riders are concentrated.

According to the report, the agency saw a 19.6 percent increase in ridership on routes where service was increased in Oct. 2016.

Although the overhaul has meant positive outcomes for riders where service has increased, it exacerbated declines by cutting service in areas with lower ridership, largely in south Orange County.

Among the three routes where service was reduced in Oct. 2016, two of which are in south OC and the third which runs from Fullerton to Newport Beach, ridership declined by about ten percent over the same period. Several other routes were eliminated entirely.

Staff attributed the ridership increase in part to a new program that gives all Santa Ana College students a year-round bus access pass for $6.75 a semester for full-time students and $5.75 for part-time students.

In the first eight weeks of the program, 3,000 students signed up, resulting in 171,555 new boardings, according to a staff report.

The agency is looking to supplement traditional bus service with other programs, such as Project V, a competitive program where local agencies can apply for funding for circulator shuttles.

To address low ridership areas, the board approved last month a “micro-transit” pilot program which will provide, in lieu of traditional bus service, vans that offer transportation within a six to eight square mile zone. The first two zones in the program will target Huntington Beach and Aliso Viejo, Laguna Niguel and Mission Viejo.

The bus overhaul was a response to a nearly 30 percent decline in bus ridership for the agency since 2008, the worst in Southern California.

When OCTA made bus cuts in the wake of the Great Recession, it focused on spreading them out equally geographically across the county, rather than cutting based on ridership levels.

That approach turned out to be a mistake, and while agencies nationwide were facing making cuts, few saw ridership fall as steeply as Orange County.

Last year the agency tried to reverse that trend by implementing a massive overhaul of the bus system, dubbed OC Bus 360.

Although the system saw positive results among many routes, overall bus ridership is declining, falling by three percent in the second quarter of 2017 compared to the year before. Nationwide, bus ridership has fallen by four percent over the same period.