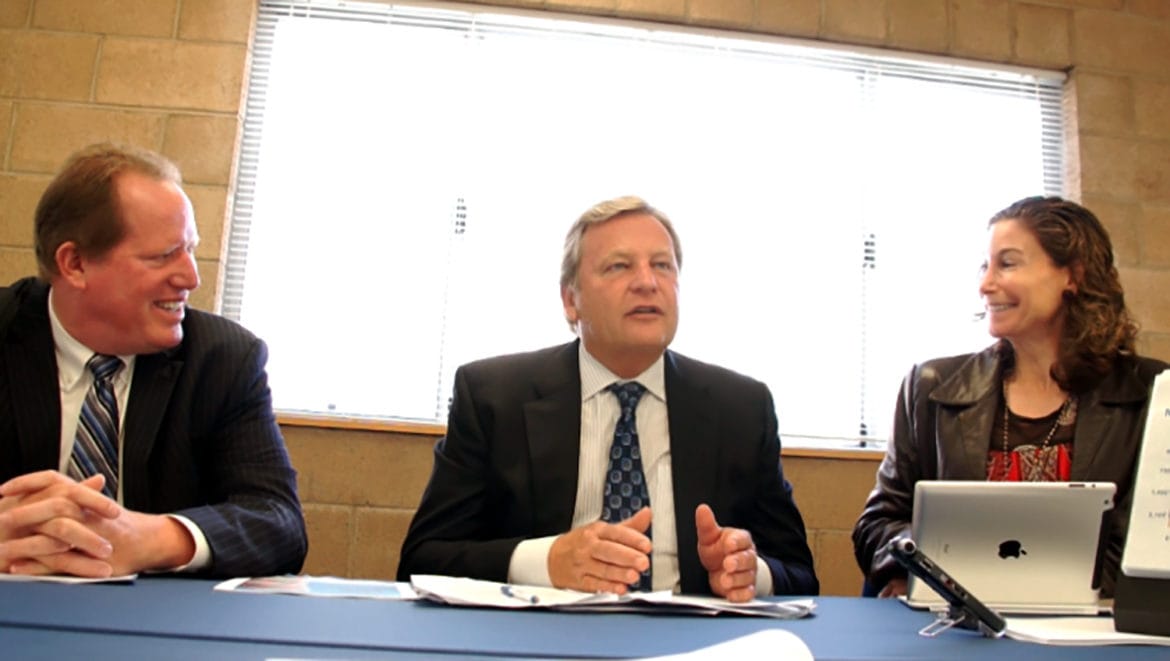 Yet instead of a plaque, these folks get a rate hike.

Board members for the tiny water district – with just under 25,000 paying customers in Costa Mesa, Newport Beach and parts of unincorporated areas around John Wayne Airport – tonight are expected to vote on hiking water prices on their customers, by 5 percent…each year for the next five years.

I’m not the only one that smells something here.

Newport Beach Daily Pilot Columnist Barbara Venezia, who also serves on the Voice of OC Board of Directors, called out the Mesa rate hike in her recent column this week, asking “If the public’s using less water, why not look for administrative savings?”

I also spoke with Al Morelli, a 35-year resident of Costa Mesa, who was a recent finalist for a Mesa Water board appointment to a vacant seat and spent some time studying the agency’s budget. He said the agency’s public affairs spending “doesn’t feel right” and has written publicly in the Daily Pilot, alerting residents to the rate hike.

Morelli, 65, is an industrial engineer and former director of policy and procurement for the Metropolitan Transit Authority in Los Angeles who also worked on citizen oversight panels with Measure M and the County Charter commission. He suggests before any rate increase is approved, an independent consultant be hired to examine spending.

Venezia and Morelli are right on.

Mesa board members, who all tout fiscal conservative credentials, won’t touch a penny of their own executive expenses or reconsider the unprecedented and expensive PR machine this small special district has built in recent years with ratepayer funds.

Officials argue the rate hike is just the natural result of higher pumping fees, cost of living hikes and conservation.

This water district came onto the local media radar screen a few years back when it embarked on a highly questionable “branding” campaign in Orange County, along with an expensive lobby campaign in Sacramento and a pricey internal PR machine.

This proposed rate hike also protects the reserves that agency officials have padded in recent years to keep a super high credit rating. Voice of OC delved into the fattened reserves a few years back.

Yet, according to a quick look at their latest budget figures, board members plan to spend nearly $1.5 million next year on public and external affairs for their agency.

Consider that the water district’s entire engineering department budget is only $693,596 for 2018.

The total compensation for the district’s General Manager Paul Shoenberger also seems high for a small water district, at more than $329,000 annually.

I reached out to Stacy Taylor, who heads up PR for Mesa Water for a total annual compensation package nearing $185,000, to get a better sense of why the rate hike was needed and whether executive spending had triggered a day of reckoning.

Taylor, according to her district’s policy she said, only takes questions via email.

That kind of policy is always the first indication that you’re dealing with an agency where something is wrong, like the smell of a rotting fish, an indicator something is off.

It’s the kind of policy you often confront as a reporter when you’re talking to authoritarians, officials who don’t like to be questioned, usually confined to closed governments like Cuba, China, North Korea or Iran…or agencies under fire.

But fair enough, I sent a list of 10 pretty direct questions.

And to Taylor’s credit, she answered.

Yet when I asked what do you say to those who say you should trim your expenses before hiking water rates, her answer was pure misdirection.

“Mesa Water® is the most efficient public water agency in Orange County, based on annual expenditures per capita — https://www.mesawater.org/about/operational-efficiency,” is what Taylor wrote back.

I especially liked the expensive trademark logo on the water district’s name.

That likely comes from the bizarre branding campaign that this small district came up with years ago.

Taylor wrote me that “Mesa Water’s branding campaign began in FY08, continued in FY09, FY10, FY11, FY12, and was completed in FY13. Over five fiscal years, less than $280,000 was spent on Mesa Water’s branding (an average of $56,000 annually). Part of the Board’s rationale for the re-branding was due to a 2008 survey of residents in Mesa Water’s service area which found that less than 20 percent of those polled could correctly name their water provider. Mesa Water’s brand is strong, and the most recent survey showed an almost 50 percent increase in customer awareness since 2008, with close to 30 percent of those polled correctly naming their water provider in 2015.”

Spending nearly $300,000 for a small community to recognize their water district seems wasteful.

I also asked why the board members’ benefits spending had gone up, why their board compensation went up by 10 percent.

Whether there were any plans to cut those benefits and pay given the crisis that now forces a rate increase?

“Mesa Water® is the most efficient public water agency in Orange County, based on annual expenditures per capita.”

It’s seems to be the standard answer to just about any question you pose.

So others can dig deep but not the board of directors because they are only a small percentage of the agency’s multi-million dollar budget.

What is even more stunning is the more than $1 million that continues to be spent on public affairs and lobbying in Sacramento.

Why does a ratepayer for a small district have to pay for so much publicity and advocacy?

Taylor wrote me that the PR machine is there “to protect public health and safety by developing communications channels to inform Mesa Water’s customers in case of a water quality issue or water system emergency; To promote Water Use Efficiency (a.k.a. “conservation”) programs and services that Mesa Water provides to help customers save water, money, and the environment (by reducing runoff); and,
To educate and inform customers about their water rates and what they receive in return for their investment, including ongoing water infrastructure renewal and repair as well as capital improvement projects that increase Mesa Water’s water supply reliability.”

Also, Taylor points out, “Mesa Water believes in giving back to its community and endeavors to become an important part of the fabric of its community. As such, Mesa Water partners with civic and charitable organizations that deliver services and support for local arts, athletics, education, environmental, healthcare, and other valuable programs that provide a better quality of life and standard of living for Mesa Water’s customers and community.”

No wonder you rate payers need to dig deeper.

These folks have a much bigger stage they need to play on.