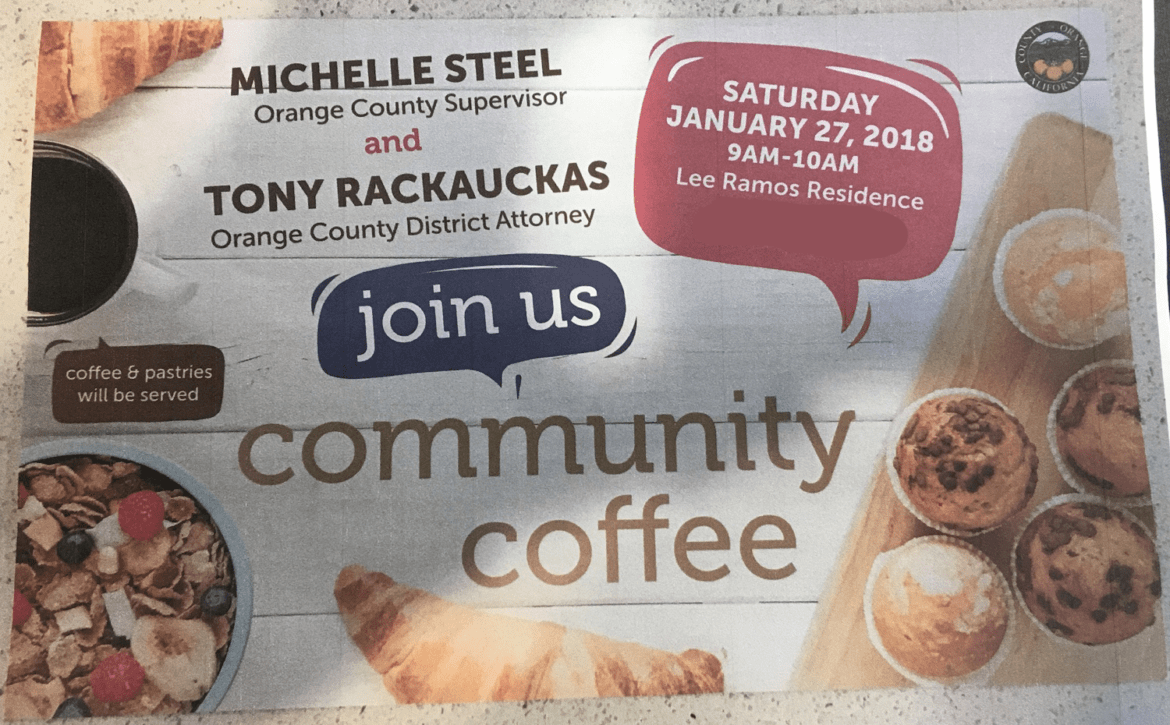 A photo of the taxpayer-funded mailer.

Government watchdog Shirley Grindle sent letters  to county Supervisor Michelle Steel and District Attorney Tony Rackauckas demanding they repay taxpayers all costs for 16,000 postcards featuring the officials’ names and inviting voters to a “community coffee” that only could accommodate 50 people.

“Your mailer inviting constituents to an event without any public purpose is improper, a misuse of taxpayers’ funds and, most critically, illegal,” reads the Feb. 14 letter from Grindle and Bill Mitchell, a lawyer and former president of Orange County Common Cause.

If Steel and Rackauckas do not reimburse taxpayers for “all costs associated with the mailing and the hosting” of the Jan. 27 event, Grindle and Mitchell wrote, they will bring legal action against them, as well as any other supervisor who sent “questionable mailers.”

The legal action will seek to ban all future mailings “that do not directly relate to the elected officials’ duties,” and win taxpayer reimbursement for all mailers the court determines violated the law, they wrote.

“Tony was an invited guest by the supervisor. It’s our indication [the] entire process was reviewed by county counsel, and we’re referring any further questions to them,” Van Der Linden said.

Grindle has endorsed one of Rackauckas’s opponents, Supervisor Todd Spitzer, in this year’s campaign for District Attorney.

“I don’t like to get involved in endorsements,” Grindle said in a telephone interview, but “with the history of the present district attorney, we definitely need a change in that office.”  Mitchell said he hasn’t endorsed or donated to any DA candidates in this race. But he said he is a past donor to Spitzer.

In addition to the letters to Steel and Rackauckas, Grindle also sent a letter to the state Attorney General’s Office alleging the DA illegally used public resources for a campaign activity during the event advertised in the mailers.

The Jan. 27 “community coffee” was at the Costa Mesa home of Lee Ramos, who is a candidate for City Council this year. Ramos’ name also was mentioned in the 16,000 taxpayer-funded mailers.

On Feb. 6 the five Board of Supervisors members unanimously gave Steel permission to hold four more “community events” in coming weeks after she agreed not to host them in private homes. The cost is unknown.

For the January event, the county spent $5,787.97 to print and send the color postcard to 16,000 voters, according to emails, text messages and video clips reviewed by Voice of OC. Another $250 was spent on food for the up to 50 guests at the Saturday morning coffee. It’s unknown how much in additional costs were spent on county staff salaries for those who worked on the mailer.

Both Steel and Rackauckas are up for re-election this year. Steel previously won by comfortable margins and has over $500,000 in her campaign account.

Rackauckas has faced numerous criticisms in recent years, most prominently when his office was removed from prosecuting mass murderer Scott Evans Dekraai due to the jailhouse “snitch scandal.” At least six convictions for serious crimes, including murder, have been overturned or sentences reduced by the courts due to the scandal.

A state law was enacted last year largely in reaction to Supervisor Andrew Do having the county spend at least $246,000 in taxpayer money on mailers featuring his name in the run-up to his tight 2016 re-election.

The spending ramped up just before the June 2016 primary election, then dropped off to nothing for three months, before ramping up again before the November general election. Do stopped sending taxpayer-funded mailers after he won re-election. 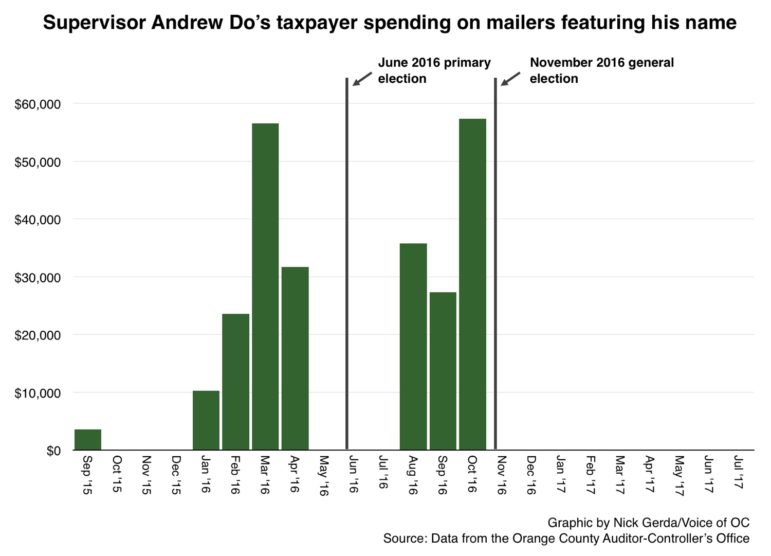 The new state law, which Grindle worked with state officials to help pass, bans local government-funded mailers featuring elected officials 60 days before elections. It was approved unanimously by both houses of the state Legislature and signed by Gov. Jerry Brown.

This year, the black-out periods are April 6 until the June 5 primary, and Sept. 7 until the Nov. 6 general election.

Grindle is a decades-long activist who, among other things, authored Orange County’s 1978 campaign finance law, known as TIN-CUP (Time Is Now, Clean Up Politics) which was approved by voters and limits the amount of campaign money county candidates can accept from donors.

In a Voice of OC podcast last week, Grindle, who also convinced the Board of Supervisors to put a county ethics commission proposal on the ballot, said the commission only can deal with county laws and the Steel and Rackauckas mailer falls under state law.

She sent a letter and flash drive Feb. 6 to state Attorney General Xavier Becerra arguing Rackauckas crossed the line during the Costa Mesa coffee when he allegedly gave a student his DA’s office business card and told him to call his government office for instructions on how to get involved in his re-election campaign.

The man, who identified himself as a  California State University, Fullerton, student, recorded video as he asked Rackauckas how he could get involved in election campaigns, according to a clip reviewed by Voice of OC.

Rackauckas advised him to contact the various campaigns, according to the video. The man asked how he could get involved in Rackauckas’ campaign.

Rackauckas reached into his pocket and appeared to hand over a card. “That number is [directly] to my office, so uh – so call – you’ll talk to my assistant, Vickie. And, uh, let her know. And she won’t be able to do anything, but she’ll make sure that…that we get that and we get it…to the right people.”

The young man asked how to find out more about Rackauckas’s campaign platform and Rackauckas told him the address for his campaign website, ocdistrictattorney.com.

Grindle and Mitchell wrote in their letter: “It is obvious that Rackauckas was advising the student that the way to work on his campaign was to contact his county employee at his county office. This is in direct conflict with the intent of Govt. Code Section 8314 which expressly prohibits state and local elected officials to use or permit others to use public resources for a campaign activity.”

Their letter concluded: “In order to avoid this occurring again, could your agency issue a warning letter to Rackauckas informing him of this ethical violation?”

Grindle said Friday she hasn’t heard from the AG’s office and no one from the attorney general’s news media office returned message late Friday afternoon from Voice of OC.

Tracy Wood is Voice of OC’s civic editor. You can contact her at [email protected].