Irvine residents opened their mail Thursday to discover a grey envelope from VoteNowAction with a “Fraud Alert”, and a “Warning from the Orange County District Attorney”. But in fact, the letter inside was actually the fraud.

A reprint of a January 25, 2018 press release from the OC DA’s office warning voters to be cautious of professional signature gatherers urged readers to “understand what they were signing” and not to be bullied by petition gatherers if you choose not to sign.

The text of the fraudulent letter specifically warns against Irvine’s “slow growth” initiative called “An Initiative Measure to Impose Project Review, Voter Approval, and Mitigation Implementation Requirements on Certain Development Proposals” and instructs voters how to have their signatures invalidated if signed. 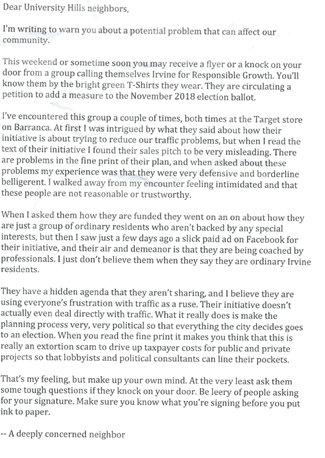 This direct mail is both deceptive and dishonest. The DA’s office has already assured the organizers of this referendum drive that the warning was general in nature about paid signature gatherers. The DA’s message fortunately doesn’t apply to the unpaid volunteers of a grassroots community effort in Irvine Instead, it’s actually the other way around.

VoteNowAction has a website which doesn’t identify a single individual. It’s not known who funds the website or paid for the letter. A form 410 for this organization is not on file with the city of Irvine.

Additionally, residents in various Irvine neighborhoods are getting mail from “a deeply concerned neighbor in Woodbridge” or “University Hills” or “Northwood” all warning about the “slow growth” petition. It’s basically the same letter, loaded with falsehoods, and only the identifying neighborhood text is changed. The letter is always unsigned. No return address. No means of calling someone if you had a question.

I’ve lived in Irvine for 20 years. When concerned neighbors want to warn about a neighborhood or city issue, they send email, they post on social media; they attend community meetings and talk with neighbors. You know whose asking and answering the questions. That’s one of the things that makes Irvine a great community; our civic engagement. And it’s an open process, not anonymous. But these attacks on the slow growth referendum certainly are secret and cowardly.

So for my neighbors in Irvine, let me offer a real fraud warning. If you get a letter from a “deeply concerned neighbor” warning about a ballot measure who doesn’t offer their name or address, toss the letter. If you get a “fraud alert” from an organization offering a website address but only a P.O. Box with no community leaders lending their names to the effort, ask yourself: “who benefits from this?” Both communications were likely paid for by allies for developers who stand to gain from defeating the initiative.

Opponents of the slow growth measure say this will impact efforts to build affordable housing in Irvine. The initiative exempts affordable housing “required by state or federal law.” Opponents say there are no such requirements. These claims are false.

A state measure, California SB35, which would supersede the provisions of the ballot initiative, relaxes code and conditional use requirements to streamline the approval process for developments that contain low income housing units in order to enable cities to comply with RHNA’s low income housing allocation. SB35 requires that 10-50 percent of a residential development be set aside for affordable housing.

Powerful business interests in our city are terrified of an all volunteer grassroots organization which has almost no money that’s trying to stop the rubber stamp by developers who fund Irvine’s city council majority’s campaign coffers. The people behind the slow growth initiatives are the true “deeply concerned neighbors” worried that Irvine’s Master Plan, which has managed growth so effectively for decades, is being replaced by a plan that rewards wealthy developers over residents.

Dan Chmielewski runs a technology public relations agency in Orange County and is the editor and publisher of TheLiberalOC.com, Orange County’s leading political blog. He’s been a resident of Irvine for 20 years.