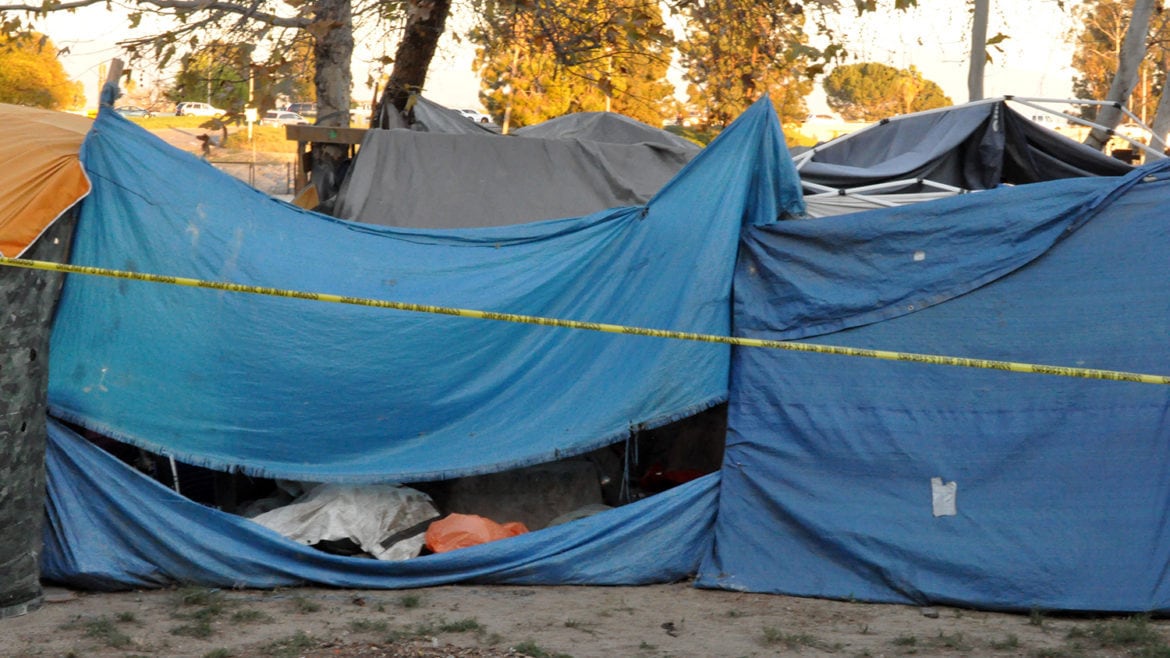 Orange County Sheriff's deputies blocked the area off as investigators examine the area where the fight reportedly happened, which lead to the death of one man. Feb. 23, 2018.

One man died from an early Friday morning fight in the Santa Ana riverbed homeless encampment, but the cause of death is still unclear as the county attorney said it was a stabbing, while the Sheriff’s department could not confirm that.

“It was an altercation that happened between two individuals encamped there,” Orange County Sheriff’s spokeswoman Carrie Braun told Voice of OC Friday afternoon. “What we believe is that the altercation was on the trail.”

Federal Judge David O. Carter, who is overseeing the riverbed evictions, said the fight was unrelated to the eviction efforts.

“Whatever happened last night had nothing to do with our movement,” Carter said at an informal court hearing Friday evening in the Angel Stadium parking lot. The hearing is the result of a lawsuit filed by attorneys Brooke Weitzman and Carol Sobel Jan. 29 over the county evicting homeless people from the riverbed without providing enough shelter.

After the first court hearing Feb. 13, the county began booking the riverbed homeless into motels and hotels throughout the county.

Carter told what he immediately termed “a bad joke” about the fight.

“It was two guys who decided to have some fun with a knife — why am I saying that? It’s a bad joke,” Carter said.

Braun said a knife was recovered from the crime scene, which is north of Chapman Avenue, on the riverbed trail. Investigators aren’t certain if the knife was used and Braun didn’t know if there was blood on the knife.

It’s also unclear how the man died, as Braun couldn’t confirm if it was a stabbing. The other man involved in the fight remains at UCI hospital in Orange.

However, County Counsel Leon Page said in a morning email sent to Carter’s law clerk, “The adult male who was unconscious was transported to UCI by Orange County Fire Authority personnel where he was pronounced deceased. The second adult male at the scene was transported to the hospital with a stab wound.”

At Friday evening’s parking lot hearing — which had no tables or chairs, leaving everyone standing in the cold wind — Carter said he thinks the riverbed homeless encampment will be completely cleared out by Saturday evening.

Carter visited the riverbed at 4:30 a.m. Friday — alone — to check on a homeless couple he was concerned about Thursday night.

He returned around 8:30 a.m., in a striped suit, and went for a walk with Sheriff’s Lt. Jeffrey Puckett until about 9:45, when he left for the Ronald Reagan federal courthouse in Santa Ana. “It takes us 12 minutes, driving at speed limit” to return to court, Carter said.  He had a separate matter scheduled for 10 a.m.

Meanwhile, Carter is slated to fly to Bangkok, Thailand Saturday morning for counter-terrorism training. His two law clerks will be at the riverbed to observe the eviction efforts until they are complete and report to Carter.

The evictions have been going on since  Carter lifted a temporary restraining order Feb. 20. The county had ramped up its eviction efforts by having probation and parole officers accompany deputies on the riverbed. The night before the county was going to begin issuing citations and arresting the homeless people living there, Carter issued his restraining order.

Before the order, the county was doing a process it calls “voluntary compliance,” which was deputies walking tent-to-tent and telling people they had to start packing up and leaving, or soon face citations or arrests.

Undersheriff Don Barnes has visited the riverbed over the last few days and said he was proud the department has “not made a single trespassing arrest.” Asked whether Sheriff Sandra Hutchens — who has been largely silent and unseen in the eviction efforts — would stop by the riverbed, Barnes said, “No, she’s dealing with another matter.”