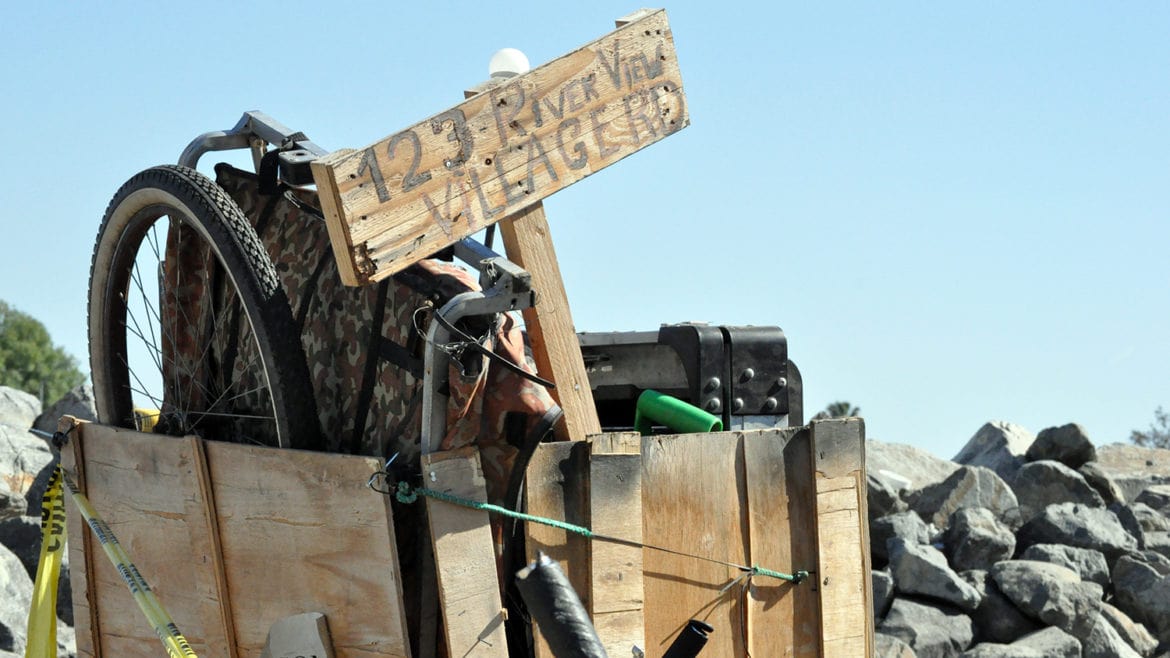 A homeless person's belongings that are packed up and ready for them to haul off, including a makeshift street address sign. Feb. 25, 2018.

The month-long motel stay for the first group of homeless people relocated from the Santa Ana Riverbed ends Friday, a deadline that has hundreds of homeless people, county residents, volunteers and attorneys for the homeless wondering what comes next.

“Everybody wants to know what’s going on and I think there’s a lot of people that are anxious,” former riverbed homeless woman Debbie Wales, who is one of those living in a motel, said in a Monday phone interview. “I feel the county, they’re just winging it. I don’t know what they have in store for us and not knowing is really bad.”

The Board of Supervisors is slated to iron out an “action plan” Tuesday, and may authorize Chief Executive Officer Frank Kim to spend up to $2 million to contract with shelters for additional beds. The supervisors’ agenda provided few details in the one paragraph description.

Meanwhile, attorney Brooke Weitzman, who represents the homeless, said she’s unclear on what comes next. Weitzman filed a federal lawsuit against the county and the cities of Anaheim, Orange and Costa Mesa Jan. 29, a week after the county began forcing homeless people from the Santa Ana Riverbed.

“As of now, the county hasn’t told us any plans on where they want people to go,” Weitzman said in a Monday phone interview.

Over 700 people from the riverbed were placed in motels as part of a federal court stipulation overseen by U.S. District Judge David O. Carter, who was adamant that the evictions be done “humanely.”

Carter halted the evictions Feb. 6, shortly before the county planned to cite and arrest people living there.

During the February court hearings, Carter said the county could remove homeless people from camps along the river near Angel Stadium, but the county also needed to give them a place to go — making clear he didn’t want people booted to the streets where they will be ticketed and eventually arrested for camping or solicitation. That’s when the county proposed placing people in motels for at least 30 days.

“I’m confident the court isn’t going to allow the county to dump people in the streets. They’ve made that very clear.” Weitzman said. “It’s kind of in the county’s hands right now. The county needs to determine what it can do, what it’s willing to do and come back to us.”

County spokeswoman Jennifer Nentwig said Monday in an email the county doesn’t plan to extend the motel stays, which, according to the court stipulation, are to last a minimum of 30 days.

“The County currently does not plan on extending the 30-day motel stays, so County outreach workers are committed to working with each individual to discuss available resources and overcome any barriers individuals may have to accepting resources,” Nentwig wrote.

The county has a six-month, $1.6 million contract with one unnamed motel. The county has not released the names of the other motels where the homeless are staying.

On Sunday, Carter scheduled a court hearing for April 3. Shortly after, Wetizman filed a request for an earlier hearing, citing concerns the 30-day motel stays will start to end Friday. Carter denied that request Monday afternoon and instead ordered the lead attorneys for both parties to meet Wednesday to talk about the next steps. He noted the supervisors’ agenda indicates a plan will be created.

“…the Court has relied on and appreciated the good faith of the parties in carrying out their obligations. At this time, the Court has no reason to believe that the parties will not continue to act in good faith in ensuring that “[a]t the conclusion of the 30 day period, appropriate resources . . . will be provided,” Carter’s order reads.

Wales said she hasn’t been given any indication from county Healthcare Agency workers about the situation.

“I don’t know what they’re doing with that (data they collect). I don’t know anything about it because I don’t get information. They just show up and ask questions. They come in and give an assessment and give you a food card. They ask you the same questions every week,” Wales said.

The 60-year-old Wales said she was combating the flu when county social workers and contractors were booking people into motels, which put her in the hospital for nine days. She didn’t go to the doctor because she didn’t want to miss out on getting a room, but had to call the paramedics the day after she got into the motel.

Wales said she’s on Social Security because she suffers from osteoarthritis and rheumatoid arthritis. Now that she’s done paying off outstanding payday loans, Wales said she’s looking to save up for a downpayment on a studio apartment, if she can afford one.

Meanwhile, Nentwig said as of March 11 there were 52 open beds at the Santa Ana courtyard homeless shelter and 90 beds available at the Kraemer shelter in Anaheim.

Several west Anaheim residents spoke at a March 6 Anaheim City Council meeting to complain about a lack of information from the county about its plans for homeless people relocated to motels.

The residents said they were concerned people might leave motels and move into nearby neighborhoods or parks.

“Already people are concerned with the amount of crime and activities in the parks in our neighborhood,” said Tracy Ureuta. “I’m just appealing to you. What is the plan to help the community there to feel safe…what is the plan for these individuals in motels all on that stretch of Beach (Boulevard)?”

Jodie Mosley, another west Anaheim resident, said she was concerned the motels would turn into makeshift homeless shelters and complained the county would not tell her the names of motels where homeless people are staying.

“There was no process, no transparency,” said Mosley, who believes residents should have had a say about which motels were used to house homeless people.

One west Anaheim resident, Mark Richard Daniels, said at the same meeting he has not seen an increase in crime along Beach Boulevard in Anaheim.

The county is not releasing the names of the motels where homeless people have been placed, citing federal laws protecting the privacy of medical information.

On March 7, Carol Sobel, one of the attorneys for former riverbed homeless people, sent a letter to the city of Buena Park alleging city officials went to a motel where homeless people have been relocated and demanded the names of guests.

Sobel wrote that doing so violates the rights of motel owners, employees and guests, citing a city of Los Angeles ordinance, which required motels to provide registration records on demand and without a warrant, that was struck down in 2015 by the U.S. Supreme Court as unconstitutional in The City of Los Angeles v. Patel.