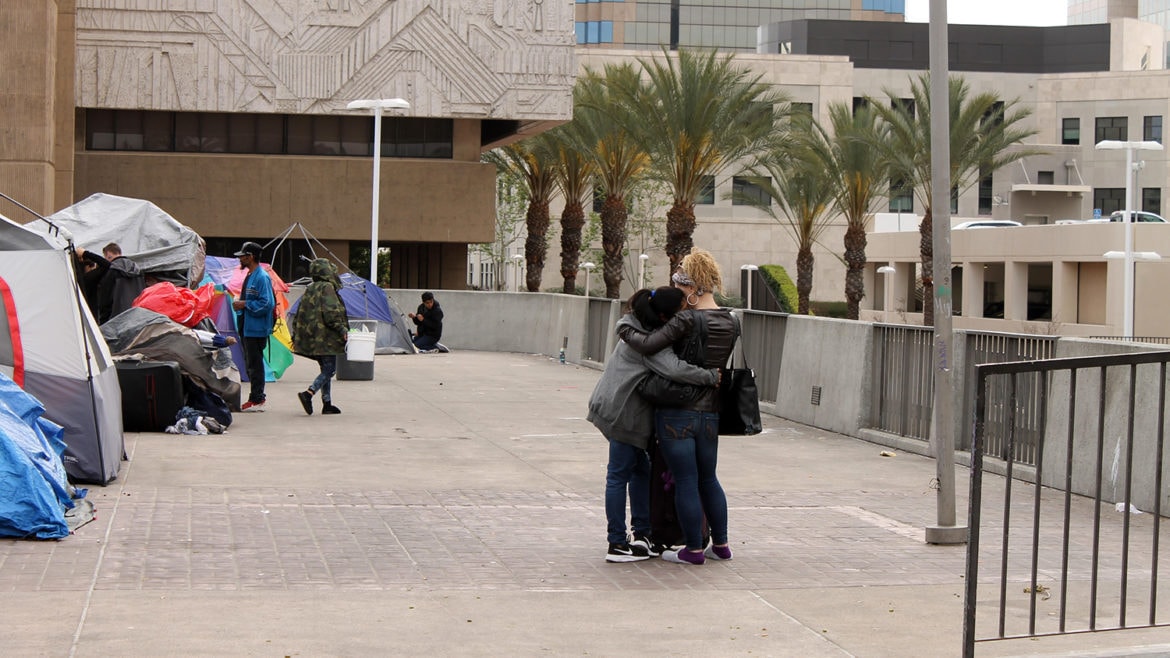 Two women embrace in the Civic Center’s Plaza of Flags shortly after county healthcare workers begin to assess the homeless population and get ready to place people in shelters or housing. April 2, 2018.

Irvine for Everyone (I4E) is a growing movement and group of Irvine residents/voters who are in support of the creation of the full spectrum of housing in Irvine.

The time has come for Irvine to act as a County leader in taking on its fair share of responsibility for Orange County’s ongoing homelessness crisis. Historically, Irvine has avoided addressing the root problem: Housing. In the late 1980s, the City turned down a HUD grant to build an emergency shelter despite the City’s own research supporting a need with approximately 400 people, including 30 to 40 families, utilizing the meager County resources with a last known address in Irvine.

In 2012, the Orange County Board of Supervisors approved a Ten-Year Plan to End Homelessness. However, many aspects of the plan were never implemented and the plan was ultimately abandoned when Susan Price, Director of Care Coordination, published the Assessment of Homeless Services in Orange County in 2016. At the Association of California Cities – Orange County Homelessness Taskforce Meetings that began in 2016 with support of the County, Irvine was frequently absent from meetings calling on City Leaders to take action to collaboratively address the growing countywide issue.

A key aspect in the collaborative approach being proposed and discussed at these meeting was the need to divide Orange County into three Service Planning Areas (SPAs); Northern, Central, and Southern. The idea being that to tackle the larger issue, and prevent homelessness from concentrating in our communities, Orange County’s 34 cities can work together to share resources and responsibility.

In October 2016, after the Santa Ana Civic Center was declared a public health crisis, the City of Santa Ana was selected for the County’s first year-round emergency shelter, opening The Courtyard in 28-days with a capacity of 400. In April 2017, with a growing Riverbed population, Anaheim opened the County’s first year-round transitional shelter with an initial capacity of 100, plans to double, and a multi-service center onsite. But despite these shelter beds available, we can all clearly see it is not enough for the number of people on our streets.

At the March 20th 2018 Irvine City Council special meeting on homelessness, respected leader, Margie Wakeham of Families Forward, said: “I’m really here in support of getting ahead of what is just a crisis and a horrible tragedy in our/a community. Mohammed talked about the family in Garden Grove that passed away last week. I think it is a reminder to all of us that this is a problem that lives within our neighborhoods. Sometimes when it is hidden we plan and plan and plan but never quite get to the point of addressing it.” Clearly, Irvine City’s policy of preventing homelessness is not 100% successful. The City needs to do more.

On April 3rd 2018, Federal Judge David O. Carter made it clear to Irvine Mayor Don Wagner that he needs Irvine to set an example for leadership in Orange County and in response, Mayor Wagner pledged to, “do everything I can.” Fortunately, the County owned land in Irvine across from the OC Great Park is zoned for an emergency shelter and we as Irvine residents have the opportunity to create a community-focused project that represents the Irvine we know and love.

On April 19th, Mayor Wagner will meet with the South Orange County Mayors Association at their regular meeting; the only item on their agenda is the site for the emergency shelter. What we are asking from Mayor Wagner is to act as the courageous man Irvine elected and the leader our community needs. Approve this site and take on the opportunity to build a world class integrated housing campus with wrap around services and onsite resources provided in collaboration with the existing network of amazing local nonprofits. We got you!

A total of 162 people, 155 of who live in Irvine have signed on to I4E. All of them support the I4E position of building a world class shelter with wrap around services and onsite resources provided collaboratively, in Irvine. Candidates living in Irvine who have signed on include: Candidate for the 45th Congressional District Kia Hamadanchy; Candidates for Irvine City Council, Farrah Khan and Kevork Abazajian; and Candidate for OC Board of Education, District 5 (which includes portions of Irvine), Mary Navarro. 48 of the 50 supportive comments are from Irvine residents. We will let you read their words of welcome and support directly from here.

If you live in Irvine, please consider signing on to Irvine For Everyone.

Anita Coleman is a former University Professor (Digital Libraries), wife, mother, researcher, writer, and resident of Irvine for ~25 years. Wendy Williams is a 30 year resident of Irvine, 50 years in the OC, and a former not-for-profit employee. Anita and Wendy would like to acknowledge the help of Garrett Dunbar, OC Burrito Project. Anita is also a member of P4H-Irvine which advocates for housing too. However, any mistakes are theirs alone.